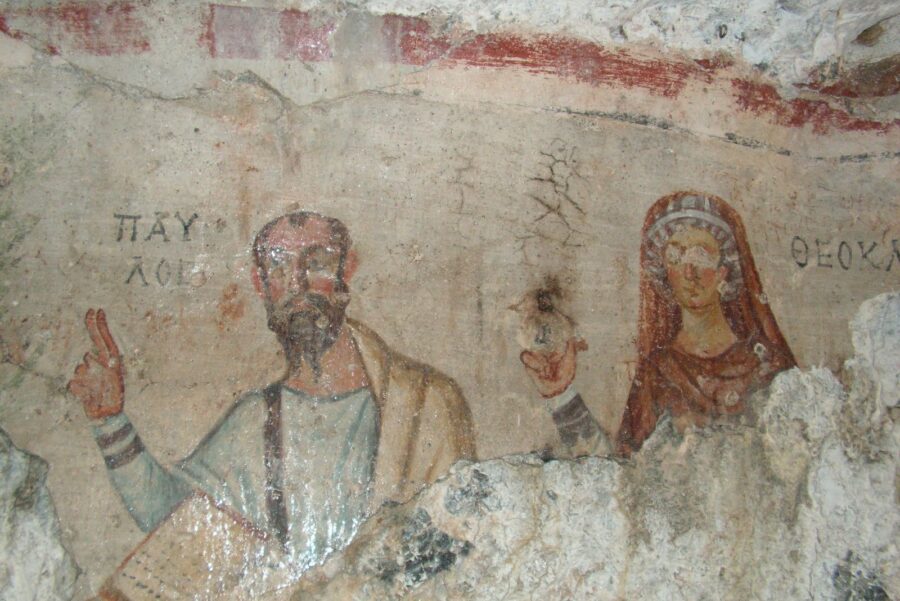 Remains of a Byzantine painting of St. Paul and St. Thecla. Photo courtesy of alchetron.com

Saint Thecla: A symbol of chastity, asceticism and perseverance

She’s widely celebrated and equally venerated and respected among the different churches of the world including the Orthodox, the Catholic and the Coptic. Saint Thecla whom we venerate today (September 24/October 7) is an apostle and a protomartyr among women who’s equal-to-apostles in sanctity.

In the Greek Orthodox Patriarchate of Jerusalem, Saint Thecla’s day is joyfully celebrated inside the small beautiful church dedicated for her within the main monastery of the Patriarchate. His beatitude Patriarch Theophilus III normally leads the liturgy every year, where many pilgrims and local believers attend to take the blessings of the great saint.

Having been born to wealthy parents and engaged to a noble man, it was not easy nor acceptable for Thecla of Iconium (modern Konya, Turkey) to choose chastity over marriage and asceticism over nobility. However, no matter how hard her mother and fiancé tried to convince her -to the point of endangering her life- to alter her decision and live up to the family’s name, Thecla never settled and remained patient as her teacher St. Paul urged her to be.

Her encounter with St. Paul

Thecla’s first insight to Christianity was through St. Paul. The earliest record of their encounter was when St. Paul was offered hospitality at the house of Onesiphorus (2 Timothy 1:16), adjacent to her window. Three days and three nights she spent by her window, listening to Paul’s sermon praising virginity, explaining that the eternal reward awaits those who live a chaste life. That was the turning point of Thecla’s life where she was determined to leave her family, fiancé and the noble life behind to follow St. Paul.

Seeing the effect St. Paul left on her daughter, Theoclia along with Thamyris (Thecla’s fiance) gathered a group of citizens who took Paul to the local magistrate and accused him of influencing the people with unnatural teachings.

Awaiting for his trial, Thecla sneaked her way into St. Paul’s cell by bribing the guards with some jewelry, to receive further teachings. Her actions caused further rage to her mother, who demanded from the governor for Paul to be whipped and expelled from the city.

Theoclia wanted to set an example for ‘’all the women who have been taught by this man’’ to be afraid so she insisted to condemn her own daughter to be burned alive in the theatre. Taken to the theatre, Thecla was stripped naked and tied to a pole. Thecla found comfort in a vision of Christ who bore a resemblance to Paul. The pyre was set blazing around her. Miraculously, a hailstorm from heaven extinguished the fire causing many of the observers to be killed. Thecla escaped and started to search for St. Paul.

On the road with St. Paul

Six days later, Thecla was able to find St. Paul and followed him. Despite his many warnings that she would face another tribulation, worse than the first, Thecla remained her grounds and continued to follow him. She asked to be baptized in order to resist temptation and endure this trial, St. Paul however, asked her to be patient.

While they were in Pisidian Antioch (cp Acts 14:21), Thecla was tested again, this time by Alexander. This provincial high priest was struck by her beauty and wanted her for himself. When she resisted him, he sentenced her to be eaten by wild beasts. Waiting for her punishment, Thecla was permitted to stay with the rich and powerful Queen Antonia Tryphaena, a relative of Caesar. In their short time together, Tryphaena grew fond of Thecla.

The day of execution arrived. Thecla was tied to a fierce lioness and paraded through the city, she was then stripped and thrown to beasts. Lions, bulls, seals and different types of aggressive animals were unleashed and ready to swallow her, and she was saved from death each time. The books record that a lioness protected Thecla and fought against her male aggressors. Thecla was then protected by a series of miracles until finally the women of the city and Queen Tryphaena intervened. To the joy of the women of the community, Thecla was released and stayed with Tryphaena for eight days. During that time, Thecla is believed to have converted the entire household.

Seal of Christ, Thecla is baptized

According to chapter nine of the book of ‘Acts of Paul and Thecla’*, it is mentioned that while Thecla was at the arena, she saw a vat of water that contained seals/sea-calves. Since she thought it might be her last chance to be baptized, she jumped into the vat and proclaimed that she was baptizing herself. A miracle occurred and all the seals/sea-calves were killed by lightning before they could eat her.

Upon returning to Iconium, she learned that Thamyris had died while her mother still had hardened her heart and remained immune to her message. After leaving Iconium, she went to Seleucia where she lived inside a cave for 72 years, ministering to many and living as a hermit performing miraculous cures. Until the district physician became upset with her, because people began to seek her out instead of going to him. In response, he hired a group of people to ravish her. Hearing this, Thecla fled and went into a rock that miraculously opened and closed her in, never to be seen again.

*The book of ‘Acts of Paul and Thecla’ is counted by the church as a non-canonical book, therefore the Oxford Dictionary of the Christian Church edited by F. L. Cross clears that “these acts contain a nucleus of genuine history, though it remains difficult to separate fact from legend.”