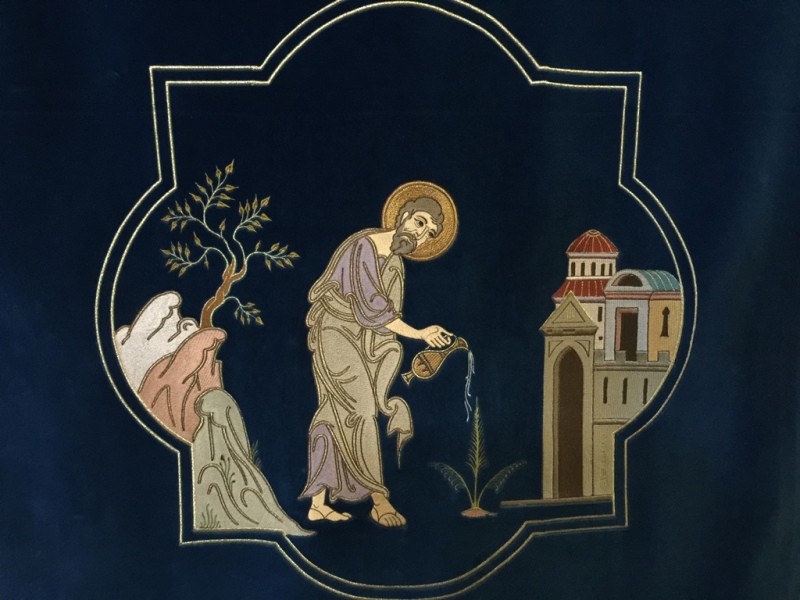 On Sunday, September 21 / October 4,2020, the Feast of the Exaltation of the Holy Cross was celebrated one week after the main Feast at the Holy Monastery of the Holy Cross, which is located in new West Jerusalem near the Jewish Knesset. This Monastery hosted the Higher Education Theological School of the Patriarchate from 1845 to 1909, and many distinguished writers, theologians and other scientists studied in it.

The Exaltation of the Holy Cross was celebrated one week later there, as an old tradition holds the belief that the three-composed wood from pine, cypress and cedar branches was planted there by Lot, and it was from this wood that the Cross of our Lord Jesus Christ was made, and on which He was crucified.

Vespers in the afternoon was led by His Eminence Archbishop Philoumenos of Pella with the co-celebration of Hagiotaphite Hieromonks, under the chanting of Mr Gotsopoulos.

The Divine Liturgy on Sunday morning was officiated by His Eminence Metropolitan Joachim of Helenoupolis, with co-celebrants Dragoman Archimandrite Mattheos and Archimandrites Meletios and Kallistos, under the chanting of Mr Gotsopoulos. The Service was attended by the Consul General of Greece in Jerusalem and the Ambassador of Georgia in Israel, along with quite a few Greeks from the Greek Community of Jerusalem and Arab-speaking faithful from Jerusalem and the occupied territories, who managed to pass the COVID-19 restrictive measures.

After the Divine Liturgy the Hegoumen and good keeper of the Monastery Most Reverend Archbishop Philoumenos of Pella offered a reception to the Episcopal Entourage, the Consul General of Greece in Jerusalem Mr Evaggelos Vlioras and the members of the Greek Consulate and to the congregation.

In the evening, Archbishop Philoumenos hosted a meal for H.H.B. our Father and Patriarch of Jerusalem Theophilos, the Episcopal Entourage, the Consul General of Greece in Jerusalem and others.