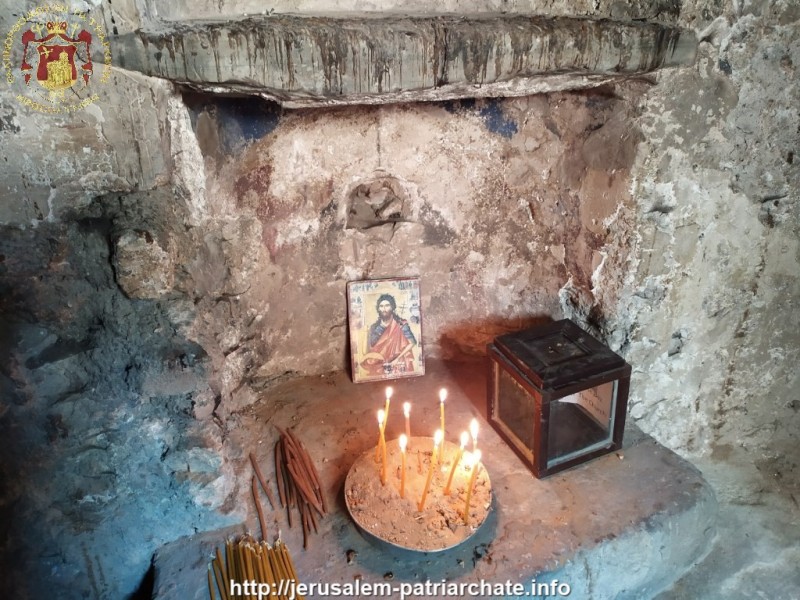 On Friday, August 29/ September 11, 2020, the Patriarchate celebrated the commemoration of the Beheading of St. John the Forerunner and Baptist.

On this day the Church, and especially the Church of Jerusalem where the Holy Forerunner lived, commemorates the Gospel narrative according to Saint Matthew 14: 1, 12,  Mark 6: 16-17, and Luke 9:9, saying that Herod the tetrarch was scorned by John because he had a relationship with his brother Philip’s wife Herodias…he imprisoned John…in order to kill him; and when Herod celebrated his birthday, Herodias’ daughter danced for him, Herod liked this and promised to give her whatever she might ask of him, even the half of his kingdom. Following her mother’s advice, she asked John’s head on a plate; Herod was very sad but for his promise granted her wish, sent a guard, and beheaded John and offered her his head on a plate.

For this reason, the mourning hymns of the Church read among other words; “O loathsome banquet, full of desecration and abominable murder!”(Vespers troparion1).

The Patriarchate honoured this event at ancient Sabastia, the area of St. John’s prison, where there are the ruins of Churches from the time of Byzantium and of the Crusades.

There, H.H.B. our Father and Patriarch of Jerusalem Theophilos participated in the prayer, and delivered the following Sermon:

“For this is he, of whom it is written, Behold, I send my messenger before thy face, which shall prepare thy way before thee”(Matt. 11:10). “Verily I say unto you, Among them that are born of women, there hath not risen a greater than John the Baptist: notwithstanding he that is least in the kingdom of heaven is greater than he”(Matt. 11:11) the Lord says.

The grace of the Holy Glorious Prophet, Forerunner, and Baptist John has gathered us today by the ruins of this Holy Byzantine Church with his Tomb, in order to glorify in Eucharist the Sacred commemoration of his Beheading in Sebastia, the great city of old.

According to the witness of historian Josephus, the place of the imprisonment and beheading of John the Baptist by Herod the tetrarch of Galilee, is Machairus (Jud. Anc. 18,52), a mountain fortress east of the Dead Sea in present-day Jordan. And the body of John, according to the testimony of the Evangelist, was transported and placed by his disciples in a monument in Sebastia. “And when his disciples heard of it, they came and took up his corpse, and laid it in a tomb”(Mark 6:29).

The Holy Forerunner holds a prominent place in the biblical history of human salvation. This is made evident by the fact that Jesus Christ Himself stresses the character and the preaching of repentance of St. John on the one hand, and on the other, He calls him to baptize Him by the river Jordan. “Then cometh Jesus from Galilee to Jordan unto John, to be baptized of him”(Matt. 3:13).

Moreover, John was called a prophet by the Messiah Jesus Christ. “But what went ye out for to see? A prophet? Yea, I say unto you, and much more than a prophet”(Luke 7:26). This is also the testimony of our Church which sings: “The memory of the just is celebrated with hymns of praise, but he Lord’s testimony is sufficient for thee, O Forerunner; for thou hast proved to be truly even more venerable than the Prophets since thou wast granted to baptize in the running waters Him Whom they proclaimed. Wherefore, having contested for the truth, thou didst rejoice to announce the good tidings even to those in Hades: that God hath appeared in the flesh, taking away the sin of the world and granting us great mercy”(Aplytikion).

The Holy Forerunner did not only baptize “God [Who] hath appeared in the flesh”, our Lord Jesus Christ, but also preached the good news about Him, as St. John the Evangelist testifies: “The next day John seeth Jesus coming unto him, and saith, Behold the Lamb of God, which taketh away the sin of the world. This is he of whom I said After me cometh a man which is preferred before me: for he was before me”(John 1:29-30).

Saint John the Baptist is recognized as the last person of the Law, and of the Prophets, and also as the inaugurator of the New Testament era, as St. Luke the Evangelist says: “The law and the prophets were until John: since that time the kingdom of God is preached, and every man presseth into it”(Luke 16:16). Interpreting these words, St. Cyril of Alexandria says: “He calls Kingdom of Heaven, in this case, the justification of faith, the washing away of sin…the sanctification of the Holy Spirit…the gift of adoption, the hope of glory which is to be given to the saints”. As for the question, “how is the Kingdom of God being preached?” St. Cyril replies by saying: “When (the Lord) had passed by, the Baptist among the people said “prepare the way of the Lord” and pointed at the already present Lamb of God, who taketh away the sin of the world”.

Having been proclaimed to be the preacher of repentance, of the washing away of sin, of the righteousness in faith and of the sanctification of the Holy Spirit, since the time he was in his mother’s womb, John could simply not ignore the illegal relationship of Herod Antipas with Herodias, his brother Philip’s wife, who was still alive. “For John had said unto Herod, It is not lawful for thee to have thy brother’s wife. Therefore Herodias had a quarrel against him, and would have killed him; but she could not”(Mark 6:18-19). Herodias’ murderous hatred convinced Herod to kill righteous John by beheading.

And St. Gregory Palamas, explaining the reason for John’s beheading says: “[The Forerunner] was beheaded while striving for virtue, so that we also may be ready to oppose sin to the point of death, knowing that  the one who defeats the passions with virtue, will receive the crown of martyrdom.”

Moreover, our Holy Father Gregory recognizes the foretelling of Christ’s death in the martyr’s death John suffered, and says: “…even in the manner of his death, should [John] be the forerunner of Christ’s death, so that according to his father’s prophesy “for you will go before the Lord to prepare His ways, , to give knowledge of salvation to His people…to give light to those who sit in the darkness and in the shadow of death”(Luke 1:76, 79) so that they may also follow Him and receive the blessed and eternal life in Christ”.

As for us, my dear Brethren, let us say along with the hymn writer, “As Martyr, Prophet, and Baptist, as the voice and lamp of the messenger, and as the greatest of Prophets according to the very testimony of God, O Forerunner, beseech the Lord that they who keep thy light-bearing memorial with longing be delivered from all temptations and the harm of the adversary”(Matins, ode 9, second canon, Troparion 3). Amen.”

At the deserted Basilica, above the underground chapel, the Divine Liturgy was held by the Hegoumen of Jacob’s well Archimandrite Ioustinos with a few other Priests, Dragouman Archimandrite Mattheos, Priest Touma from Zababde, Archimandrite Leontios, who also chanted along with the members of Rafidia choir. Quite a few faithful Christians attended the Service despite the COVID-19 pandemic.