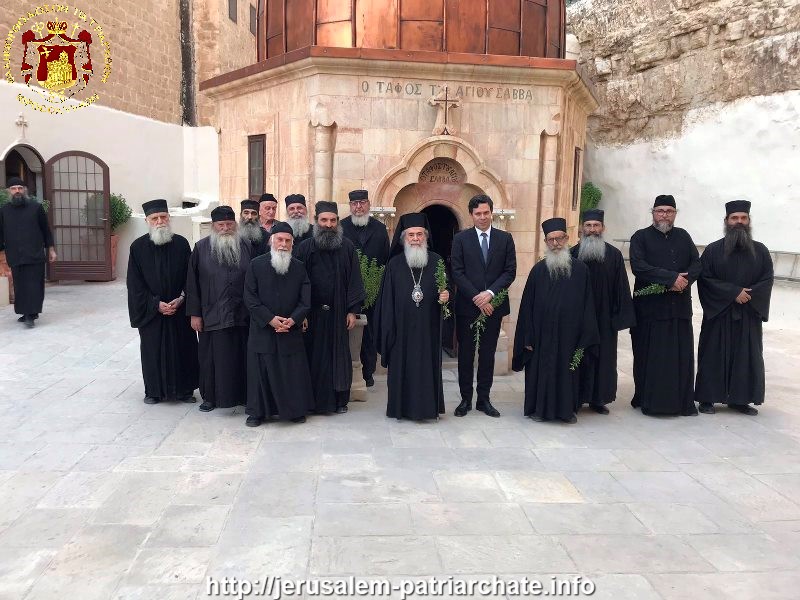 THE VISIT OF H.H.B. AND OF THE CONSUL GENERAL OF GREECE AT THE H. MONASTERY OF ST. SAVVAS

On Thursday evening, July 31/ August 13, 2020, one day before the fast of the Dormition, His Beatitude our Father and Patriarch of Jerusalem Theophilos visited the Holy Monastery of our Holy Father among the Saints Savvas the Sanctified for the name day of the Spiritual Father of the Lavra, Reverend Archimandrite Eudokimos.

On this visit His Beatitude was accompanied by the Consul General of Greece in Jerusalem Mr. Christos Sophianopoulos and their Eminences; Metropolitan Isychios of Kapitolias, Archbishop Aristarchos of Constantina and the Master of Ceremonies Archimandrite Bartholomew.

His Beatitude was welcomed in reverence by the Community of St. Savvas and after the veneration of the Holy Relics of our Holy Father Savvas the Sanctified, He and the Consul General were informed by the celebrating Spiritual Father Archimandrite Eudokimos on the problems caused to the monastery by the neighbouring inhabitants in a two km distance surrounding the Monastery, a territory established to belong to the Monastery which non-buildable since the time of the Trustee English Government, then of Jordan, and until the present time.