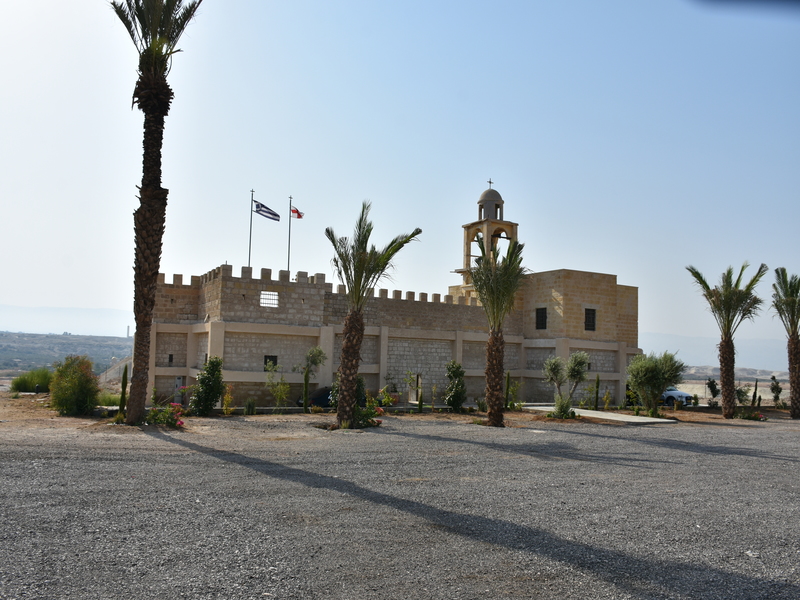 HIS BEATITUDE THE PATRIARCH OF JERUSALEM OFFICIATES THE DIVINE LITURGY AT THE HOLY MONASTERY OF ST. JOHN THE BAPTIST BY THE RIVER JORDAN

On Sunday, July 13/26, 2020, Sunday of the Holy Fathers and of the Synaxis of Archangel Gabriel, as well as of the commemoration of St. Stephen of St. Savvas Lavra, His Beatitude our Father and Patriarch of Jerusalem Theophilos celebrated the Divine Liturgy at the Holy Monastery of St. John the Baptist at the West Bank of the River Jordan, conforming to the protective guidelines against COVID-19. This Monastery was half-destroyed during the six-day war in 1967, but it has been preserved, renovated and projected again as a marvellous shrine by the Patriarchate, with the funding of the memorable Hegoumen of Sarantarion Mount Archimandrite Gerasimos, under the supervision and intensive care of the Hegoumen and Master of Ceremonies Archimandrite Bartholomew.

In this first Patriarchal Liturgy at the Monastery, co-celebrants to His Beatitude were their Eminences; Metropolitan Isychios of Kapitolias and Archbishop Aristarchos of Constantina, Archimandrite Meletios, Hieromonk Onuphrios, Hierodeacon Eulogios, while the Hegoumen of the H. Monastery of St. Gerasimos of the Jordan, Archimandrite Chrysostom also participated in the prayer. His Eminence Metropolitan Joachim of Helenoupolis delivered the chanting and the service was attended by some nuns of the desert and the Architect Mr. Theodosios Mitropoulos.

Before the Holy Communion there was a Memorial Service for the repose of the soul of the memorable Archimandrite Gerasimos and His Beatitude read the following Sermon;

The Lord said to His disciples: “Ye are the light of the world. A city that is set on a hill cannot be hid. Neither do men light a candle, and put it under a bushel, but on a candlestick; and it giveth light unto all that are in the house” (Matt. 5:14-15).

Today the Holy Church of Christ honours and venerates the commemoration of the Holy six hundred and thirty Fathers of the Ecumenical Synod in Chalcedon. Therefore, we too, have gathered in this holy shrine, the Holy historic Monastery of St. John the Baptist of our Lord Jesus Christ, by the river Jordan, in order to celebrate the Sacrament of the Holy Eucharist and glorify the great Name of the Holy Trinity.

Addressing His Disciples, the Lord calls them “the light of the world”. “Ye are the light of the world”(Matt. 5:14). This designation does not apply only to the Twelve Disciples, but also to their descendants, who are the Holy Hierarchs and God-bearing Fathers of the Church, those who strengthened the one unblemished faith of the Gospel as the hymnographer says: “The preaching of the Apostles and the doctrines of the Fathers confirmed the one Faith in the Church. And wearing the garment of truth, woven from the theology on high, she rightly divideth and glorifieth the great mystery of piety” (Minaion July 13 Kontakion of the Fathers).

The “great mystery of piety” is no other than the mystery of the Divine Providence, of the Incarnation of God the Word, our Saviour Christ, from the pure flesh of the Ever-Virgin Theotokos Mary, as it was foretold by the prophets: “I will also give thee for a light to the Gentiles, that thou mayest be my salvation unto the end of the earth”(Isaiah 49:6). Apostle Paul refers to these prophetic words of Isaiah in order to confirm his mission to the nations (Acts 13:47). And according to the witness of St. John the Evangelist, “Jesus again unto them, saying, I am the light of the world: he that followeth me shall not walk in darkness, but shall have the light of life”(John 8:12).

Again, according to the witness of St. John the Evangelist, Christ “was the true Light, which lighteth every man that cometh into the world”(John 1:9). And according to St. Paul, though him, Jesus Christ became for the faithful, wisdom stemming from God with His teaching, and justification with His death and resurrection and sanctification with His ascension and with the sending down of the Holy Spirit, as well as a complete liberation with His glorious return in His Second Coming. “But of him are ye in Christ Jesus, who of God is made unto us wisdom, and righteousness, and sanctification, and redemption”(1 Cor. 1:30).

Being the God-human body of Jesus Christ and he “dwelling place of the Lord in Spirit”(Eph. 2:22), the Church is in itself the living torch, whose light, which is the light of Christ, shines upon all Christ’s friends. According to Zigavinos, Christ is the light which leads people from the darkness of fallacy to the truth, from sin to virtue, which illumines the mind of men. As it is written, “In him [Christ] was life; and the life was the light of men”(John 1:4).

God the Word, Christ, as the fountain of life “was life”(John 1:4) and is the One who creates and sustains every living thing. This truth was proclaimed by the Holy and God-bearing Fathers of the Church at the Ecumenical Synods, especially at the 4th Ecumenical Synod in Chalcedon which we honour today, in which the blasphemous teaching of the Heretic Monk Eutyches was condemned. Moreover, this Synod condemned Monophycitisism and Nestorianism and formulated the eminent dogmatic term of Chalcedon, through which it established the Christological doctrine of the Orthodox Faith, accepting the two natures – divine and human – (two working powers and two wills) united unmistakably and indivisibly in the One Person, or the One Hypostasis of the Divine Word.

The great and undeniable significance of the holy Ecumenical Synods according to the established Professor Ioannis Karmiris is owed to the fact that they became the instrument that formulated the doctrines of the Church and permanently established around the world its common and uniform Tradition about the Faith and the manner of living, along with the combat of the various heresies and the guarding of the Ecclesiastical unity, which is mainly based on the dogmatic unity, of which the Ecumenical Synods were precisely both bearers and guarantors.

My dear Brethren, following unwaveringly the Apostolic Traditions and the Divine Doctrines that have been established at the Ecumenical Synods by the God-inspired Fathers and Teachers, we pay heed to St. Paul saying: “A man that is an heretic after the first and second admonition reject; Knowing that he that is such is subverted, and sinneth, being condemned of himself”(Titus 3:10-11). And let us say along with the hymnographer; “While celebrating on this day the holy Fathers’ memory, O all compassionate Saviour, we ask that by their entreaties Thou rescue us, Thy flock, O Lord, from all the harm of heresies, vouchsafing unto all of us to glorify God the Father, the Word, and All-holy Spirit” (Matins Exapostilarion). Amen.

After the Divine Liturgy Dismissal the Hegoumen Archimandrite Bartholomew hosted a reception.