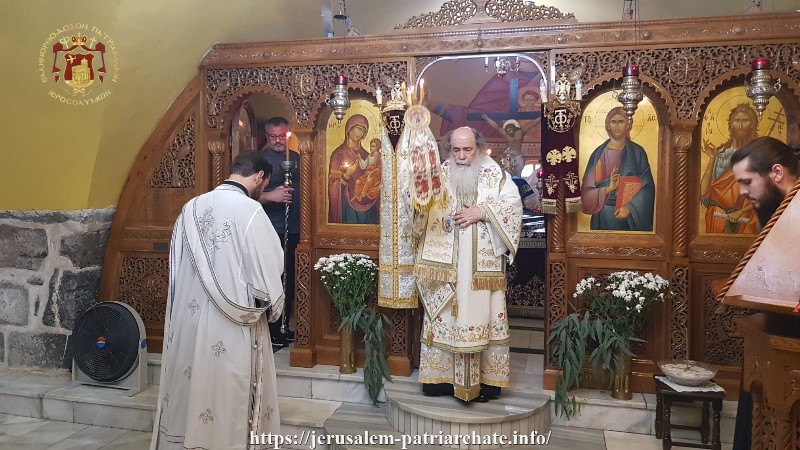 On Monday, June 30/ July 13, 2020, the Patriarchate celebrated the feast of the Synaxis of the Twelve Apostles.

Through this feast the Church gathers all faithful Christians in honour of the Holy Twelve Apostles who contributed greatly to the spreading of the preaching of our Lord and Saviour Jesus Christ of Nazareth, Who made the whole world marvel through them.

The Patriarchate celebrated this feast at the Holy Monastery dedicated to the Twelve Apostles downtown Tiberias city, at the north-west bank of the sea of Tiberias.

His Beatitude our Father and Patriarch of Jerusalem Theophilos officiated the Divine Liturgy, with co-celebrants their Eminences Metropolitans Kyriakos of Nazareth and Joachim of Helenoupolis, Hagiotaphite Hieromonks, Archdeacon Mark and Hieordeacon Eulogios. The chanting was delivered by the Secretary of the Holy and Sacred Synod Hierodeacon Simeon, as the service was attended by a limited number of faithful due to COVID-19.

His Beatitude delivered the following Sermon to this small congregation;

“But when he saw the multitudes, he was moved with compassion on them, because they fainted, and were scattered abroad, as sheep having no shepherd. Then saith he unto his disciples; the harvest truly is plenteous, but the labourers are few; Pray ye therefore the Lord of the harvest, that he will send forth labourers into his harvest. And when he had called unto him his twelve disciples, he gave them power against unclean spirits, to cast them out, and to heal all manner of sickness and all manner of disease” (Matt. 9:36-38, 10:1). “And as ye go, preach, saying, The kingdom of heaven is at hand”(Matt. 10:7).

The Holy and all-wise chorea of the Apostles of Christ has gathered us all today in their Monastery in this shrine, where Jesus appeared to His disciples by the sea of Tiberias (John 21:1), in order to celebrate their synaxis (gathering).

This synaxis refers to the Twelve Disciples to whom Jesus said: “The harvest truly is plenteous, but the labourers are few; Pray ye therefore the Lord of the harvest, that he will send forth labourers into his harvest”(Matt. 9:37-38). Interpreting this verse, St. Chrysostom writes: “By saying “pray of the harvest” when they had not prayed nor asked for anything yet, Jesus directly ordains them, reminding them …that He is the farmer, the Lord of the harvest, as He also is the Master of the Prophets”. It is also clear, St. Chrysostom adds, that He did not send His disciples to harvest over some foreign labour, but to those which He sewed through His Prophets.

“And when he had called unto him his twelve disciples, he gave them power against unclean spirits, to cast them out, and to heal all manner of sickness and all manner of disease” (Matt.10:1). And all these they could do before they had been given the Holy Spirit. Because, as St. John the Evangelist says: “they had not yet received the Holy Spirit”. “But this spake he of the Spirit, which they that believe on him should receive: for the Holy Ghost was not yet given; because that Jesus was not yet glorified” (John 7:39). How did they cast out the unclean spirits then, our Holy Father Chrysostom wonders. By the command and the authority of Jesus, St. Chrysostom answers to himself.

And the Day of Pentecost, when “they were all with one accord in one place… And there appeared unto them cloven tongues like as of fire, and it sat upon each of them. And they were all filled with the Holy Ghost, and began to speak with other tongues, as the Spirit gave them utterance”(Acts 2:1-4) St. Luke the Evangelist mentions in the Acts of the Apostles.

Interpreting these words, Ecumenios says: “By the tongue the marvels of God are being declared”. And St. Gregory the Theologian says: “with tongues so that there is proximity to the words”. Tongues were seen, because we have the word of God from the Holy Spirit and Christ was going to speak to the world through the Holy Spirit, and He gave His Spirit to the Disciples in order to transmit to then not only the knowledge, but also the power, to preach and convey to the world the knowledge of truth, which they had received. “Go ye therefore, and teach all nations, baptizing them in the name of the Father, and of the Son, and of the Holy Ghost”(Matt. 28:19), the Lord asks of His Disciples.

“The Lord says, not simply that they should baptize, but to teach beforehand, …so that faith should become right through the teaching, and after the acquisition of faith, the baptism should be added to complete it” St. Athanasios explains. Indeed, the preaching of Christ’s Disciples, or rather their Apostolic teaching according to the Lord’s command; “Teaching them to observe all things whatsoever I have commanded you: (Matt. 28:20) is the primary source of the healthy teaching (2 Tim. 4:3) of the Holy Church of Christ.

Preaching the unifying strength of the Church between the Jews and the Gentiles, St. Paul says: “Now therefore ye are no more strangers and foreigners, but fellow citizens with the saints, and of the household of God; And are built upon the foundation of the apostles and prophets, Jesus Christ himself being the chief corner stone” (Eph. 2:19-20).

In other words, my dear brethren, the Holy Apostles became the foundation of the Church by Christ through the Holy Spirit, in establishing faith and the local churches all over the world, which were led by the Apostles themselves, or by the Bishops they ordained. That is why St. Paul advices the Bishops by saying: “Take heed therefore unto yourselves, and to all the flock, over the which the Holy Ghost hath made you overseers, to feed the church of God, which he hath purchased with his own blood”(Acts 20:28).

The significance of the Apostolic succession is praised by St. Chrysostom: “The prophet is a lord…the shepherd and teacher is a spiritual lord; but above all those the apostolic succession is greater”. This means that the apostolic character stems from the Holy Spirit. And the Holy Spirit is of One essence with the Father and the Son, Who puts together the whole constitution of the Church, according to St. Gregory the Theologian. Moreover, the Catholic and Apostolic Church is especially stressed in The Creed.

Needless to say, that the Apostolic character of the Church is inseparable to the Apostolic succession of the Shepherds, namely of the Bishops of the Church, as well as of the Apostolic Tradition according to St. Paul’s teaching: “O Timothy, keep that which is committed to thy trust”(1 Tim. 6:20), “That good thing which was committed unto thee keep”(2 Tim. 1:14), “Therefore, brethren, stand fast, and hold the traditions which ye have been taught, whether by word, or our epistle”(2 Thess. 2:15).

“The Apostolic beginning” according to St. Chrysostom, which encompasses the Apostolic succession and the Apostolic Tradition, has its point of reference in the experience of the Apostles on the day of Pentecost, when “they were all filled with the Holy Ghost, and began to speak with other tongues, as the Spirit gave them utterance”(Acts 2:4).

Behold why our Holy Church especially honours the commemoration of the Holy Apostles. Let us therefore say along with the hymnographer: “O Good Saviour, Who by nature art the Friend of man and great in compassion, by the divine supplications of Thine all-hymned Virgin Mother, and the intercessions of Then Apostles Peter and Paul, and of the Twelve Apostles, send unto us from Heaven Thy mercies and succour” (Minaion June 30, ode 9, theotokion). Amen.

After the Divine Liturgy the good caretaker of the Monastery Hegoumen Archimandrite Parthenios offered a meal to the Patriarchal entourage.