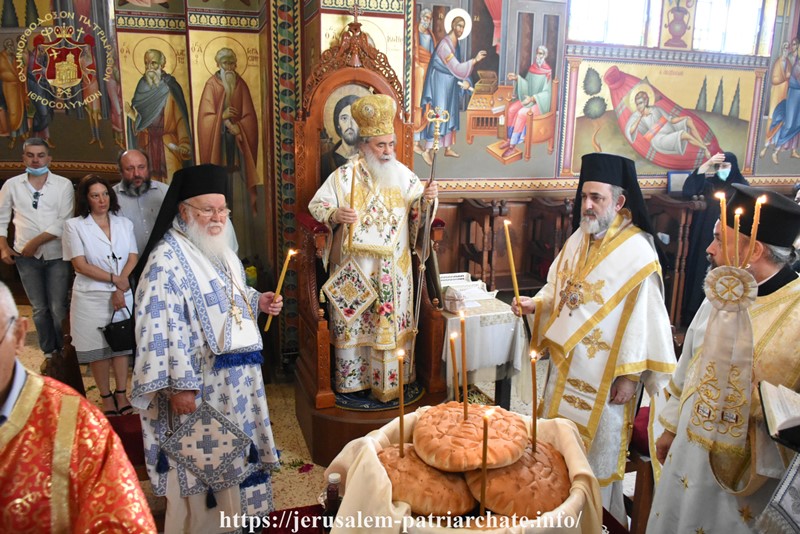 On Sunday, June 29/July 12, 2020, the Patriarchate celebrated the commemoration of the Holy Glorious and Chiefs of the Apostles Peter and Paul at the Monastery dedicated to them in the seaside deserted town of Capernaum at the north-west bank of the sea of Tiberias.

On this feast the Church honours Apostle Peter, brother of Apostle Andrew, who was born in Bethesda of Galilee and followed the Lord from the beginning. Apostle Peter denied the Lord on the night of His Passion, but repented at the rooster’s crow and was again received by the Lord after the Resurrection with the words “Peter, lovest thou me?” He became an Apostle and witness and martyr of the Lord, preaching Him and His mission in places of Asia, Pontus, Cilicia and elsewhere.

The Church honours likewise Apostle Paul, as a former persecutor of the Church who was called by the Lord through a vision on his way to Damascus, and accepted the call, becoming a chosen vessel and preached Christ more than all other Apostles, in the Mediterranean, and as far as Rome, which is why he was distinguished as the Apostle of the nations.

In honour these Chiefs of the Apostles His Beatitude officiated the Divine Liturgy in the aforementioned Monastery with co-celebrants their Eminences Metropolitans Kyriakos of Nazareth and Joachim of Helenoupolis,  at the chanting of Monk Nickolaos, with the participation of only a few faithful due to the increase of the COVID-19 patients again.

“Let us all praise with sacred hymns Peter and Paul, the men of God, the foremost of the Apostles, and the bright lights of the whole world; the preachers of the holy Faith, the trumpets of theology, revealers of divine decrees, the pillars of the august Church, and the destroyers of error” the hymnographer of the Church proclaims (Minaion June 29, exapostilarion of praises).

The sacred feast of the holy couple of Apostles Peter and Paul has gathered us today in this holy shrine of Capernaum, in order to honour their commemoration in Eucharist and doxology.

Having been filled with the Holy Spirit and the Divine Grace, both of these chiefs of the Apostles were excelled among the other Apostles for their extreme godly zeal and for their redeeming theological interpretation of the incarnation of God the Word, our Lord Jesus Christ.

Let us hear the words of the hymnographer: “Nor by flesh neither by blood did God inspire thee to speak theologically about Christ being the true Son of God, Apostle Peter”. And for Paul: “Now is Christ no more seen by thee in a dark saying, neither in a glass, but face to face, discovering to thee the perfect knowledge of the God-head”(Ode 9, Canon of Paul,  troparion 3).

This event is witnessed by Matthew the Evangelist, where Christ says to Peter: “Blessed art thou, Simon Barjona: for flesh and blood hath not revealed it unto thee, but my Father which is in heaven”(Matt. 16:17-18). And in the Book of Acts the Lord says to Paul: “Saul, Saul, why persecutest thou me? And he said, Who art thou, Lord? And the Lord said, I am Jesus whom thou persecutest…And there was a certain disciple at Damascus, named Ananias; and to him said the Lord in a vision… Go thy way: for he [Paul] is a chosen vessel unto me, to bear my name before the Gentiles, and kings, and the children of Israel”(Acts 9:4-15).

The spiritual and moral grandeur of “the rock of faith”, namely of Peter, and of “the chosen vessel” namely of Paul, is made obvious by two things. Firstly, these Holy Apostles became eye-and-ear-witnesses of the invisible mysteries of the glory of the Trinitarian God, Who has been revealed in the form of Jesus Christ. “For we have not followed cunningly devised fables, when we made known unto you the power and coming of our Lord Jesus Christ, but were eyewitnesses of his majesty” Peter says (2 Peter 1:16). Secondly: “I will come to visions and revelations of the Lord. I knew a man in Christ above fourteen years ago, (whether in the body, I cannot tell; or whether out of the body, I cannot tell: God knoweth;) such an one caught up to the third heaven. And I knew such a man, (whether in the body, or out of the body, I cannot tell: God knoweth;) How that he was caught up into paradise, and heard unspeakable words, which it is not lawful for a man to utter”(2 Cor. 12:1-14, St. Paul confesses.

Moreover, the preaching of our Holy Apostles according to the Lord’s word: “Go ye therefore, and teach all nations, baptizing them in the name of the Father, and of the Son, and of the Holy Ghost”(Matt. 28:19) is inspired by Christ, and by Christ’s light, as this is stated by St. Paul: “For as many of you as have been baptized into Christ have put on Christ”(Gal. 3:27). This denotes that the Apostolic preaching is one of repentance, righteousness and holiness, in Christ crucified and resurrected. The holy Church of Christ honours especially the chiefs of the Apostles in gratitude as it should, because they significantly contributed to the foundation of the “Churches of nations”, namely to the peoples who did not know the moral Monotheistic religion which was revealed to Moses on Mount Sinai. Let us hear what Peter said to the Apostolic Synod in Jerusalem: “And when there had been much disputing, Peter rose up, and said unto them, Men and brethren, ye know how that a good while ago God made choice among us, that the Gentiles by my mouth should hear the word of the gospel, and believe. And God, which knoweth the hearts, bare them witness, giving them the Holy Ghost, even as he did unto us” (Acts 15:7-8). As far as Paul is concerned, he was chosen by the Lord Himself, Who said: “he is a chosen vessel unto me, to bear my name before the Gentiles”(Acts 9:15). Paul writes in his Letter to the Romans along with the greetings to his accomplices: “Greet my helpers in Christ Jesus… unto whom not only I give thanks, but also all the churches of the Gentiles”(Romans 16:3-4).

Ιn their letters both Peter and Paul  theologically develop that the God-human institution of the Church is a spiritual house, with Chris being the chief corner stone according to Peter (1 Peter 2:4-5), and as the body of Christ, with Christ being the head of this body according to Paul: “and gave him [Christ] to be the head over all things to the church, Which is his body, the fulness of him that filleth all in all”(Eph. 1:22-23). “To the intent that now unto the principalities and powers in heavenly places might be known by the church the manifold wisdom of God”(Eph. 3:10).

It is also noteworthy that the distinction of the holy chiefs of the Apostles should by no means be considered as spiritual superiority over the other Apostles, because the gift of the Holy Spirit that was given by the Resurrected Christ to his disciples and Apostles was given “when the doors were shut where the disciples were assembled”(John 20:19), without any quantitative or qualitative discrimination. Interpreting the words of Jesus to His disciples: “Receive ye the Holy Ghost”(John 20:22), St. Cyril of Alexandria says: “Christ did not give the Holy Spirit to some only, but to all the disciples”.

To these great luminaries, Peter the rock of faith and Paul the true teacher who revealed the mysteries of our Lord and Saviour Jesus Christ, let us pray and say along with the hymn writer: “Apostles of Christ our God, entreat God for the remission of our sins, as we celebrate your holy commemoration”. Amen. Many happy returns in good health. “

After the Divine Liturgy the hardworking caretaker of the Monastery Monk Eirinarchos hosted a meal for His Beatitude and His entourage.