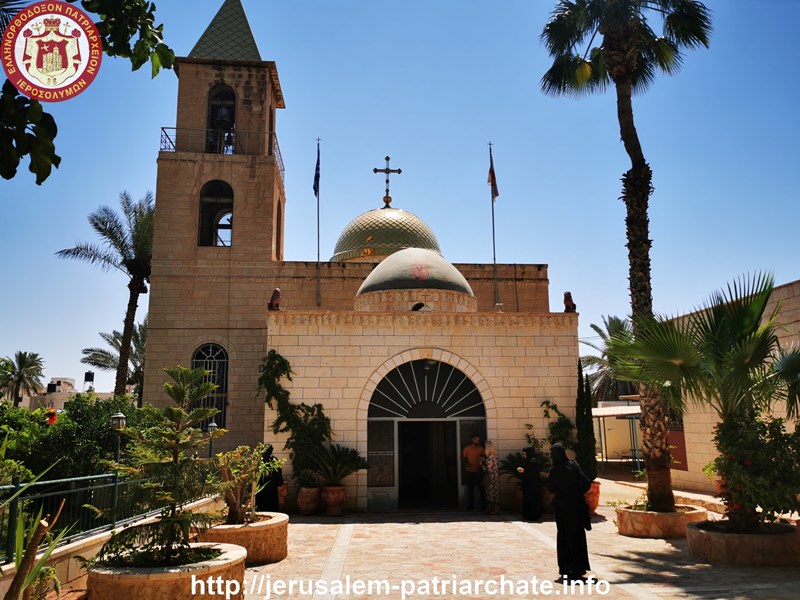 On Saturday, June 14/27, 2020, the Patriarchate celebrated the commemoration of the Holy Prophet Elisha at the Holy Monastery dedicated to him in Jericho, next to the sycamore tree of Zacchaeus.

On this day the Church commemorates the Holy Prophet Elisha according to the testimony of the Old Testament, in the Books of Kings. He was called to the ministry of God by Prophet Elijah, and having been anointed a Prophet by God’s command, he followed Elijah for the rest of his life-time and  was deemed worthy by God of the gift to work miracles.

By the divine power given to him, he turned the bitter harmful waters by the foot of Sarantarion Mount “of Jericho into sweet and drinkable and worked many signs and marvels, finally gaining double the grace of Prophet Elijah, which was sent down to him from on high, when Elijah was lifted up in the fiery chariot. Elijah threw down his fleece to Elisha, and he received it along with the double grace, stepped on the fleece and walked on the waters of the river Jordan to cross to the other side”.

His Beatitude read the following Sermon to those present:

“Since great Elijah, in his divine foresight, knew thee to be his own disciple, O wise Elisha, he made thee a Prophet set all ablaze with the Spirit’s light. Hence, today we honour thine all-holy remembrance and with pious mind revere both thee and Elijah, O glorious man of God” the hymnographer of the Church proclaims (Minaion, Matins, Sessional Hymn after Ode 3).

Prophet Elisha who received double the grace of the Holy Spirit and was a disciple of the great prophet Elijah of Thesbes, has gathered us all today in his Holy Monastery in the historic town of Jericho of Palestine, in order to festively celebrate his sacred commemoration and thank the Holy Trinitarian God who made him a “wondrous vessel” (Wisdom Sirach 43:2).

“And the Lord said unto him, Go, return on thy way to the wilderness of Damascus…and Elisha the son of Shaphat of Abelmeholah shalt thou anoint to be prophet in thy room… So he departed thence, and found Elisha the son of Shaphat, who was plowing with twelve yoke of oxen before him, and he with the twelfth: and Elijah passed by him, and cast his mantle upon him. And he left the oxen, and ran after Elijah,… and ministered unto him”(3 Kings 19:15-21) we read in the Book of Kings.

The personality and the prophetic gift of Prophet Elisha are clearly depicted at the book “Wisdom Sirach”: “When Elijah was enveloped in the whirlwind, Elisha was filled with his spirit; He worked twice as many marvels, and every utterance of his mouth was wonderful. During his lifetime he feared no one, nor was anyone able to intimidate his will. Nothing was beyond his power; and from where he lay buried, his body prophesied. In life he performed wonders, and after death, marvellous deeds (Wisdom Sirach 48:12-14).

Our Lord Jesus Christ refers to Prophet Elisha on His teaching to the Pharisees: “And many lepers were in Israel in the time of Elisha the prophet; and none of them was cleansed, saving Naaman the Syrian”(Luke 4:27) according to the witness of Luke the Evangelist.

It is also noteworthy that Jesus does not refer only to the wondrous prophet Elisha, but to all the Prophets of the Law of Moses. And this is so because the Prophets foretold the earthly life of God the Word the Son of God and our Lord and Saviour Jesus Christ, and prepared His way, according to the witness of the Lord who said to His disciples on the way to Emmaus: “O fools, and slow of heart to believe all that the prophets have spoken: Ought not Christ to have suffered these things, and to enter into his glory”(Luke 24: 13, 25-26). And elsewhere: “Then Peter opened his mouth, and said,.. that Christ is ordained of God to be the Judge of quick and dead. To him give all the prophets witness, that through his name whosoever believeth in him shall receive remission of sins”(Acts 10:34, 42-43).

And the Apostle of the Nations Paul in his preaching gives praise to the election and mission of both the holy Apostles and the Prophets, who are equally the foundation stone upon which the dwelling house of God has been built, with Christ being the chief corner stone: “Now therefore ye are no more strangers and foreigners, but fellow citizens with the saints, and of the household of God; And are built upon the foundation of the apostles and prophets, Jesus Christ himself being the chief corner stone”(Eph. 2:19-20).

This is what distinguishes the true Prophets from the false ones, that they preach and foretell the workings of the Holy Spirit, the Nativity of Christ. “Behold, a virgin shall conceive, and bear a son, and shall call his name Immanuel”(Isaiah 7:14), the Prophet Isaiah foretells. “Rejoice, O Elisha, who while on earth hast shown an example of a life-equal to the Angels’, and while in the flesh hast lived without a peer. Since thou didst preserve the eye of thy soul pure of all that is material, O Prophet, thou wast counted worthy to foresee things to come by the clear light of the Spirit” the hymnographer says (Matins, Ode 1, troparia 1-2).

In order to comfort and strengthen the Christians, Saint James the Brother of God says in his Letter: “ Take, my brethren, the prophets, who have spoken in the name of the Lord, for an example of suffering affliction, and of patience”(James 5:10). This shows that both the Apostles and the Prophets, as chosen vessels of God, and acted according to the instruction of the Holy Spirit (Luke 4:1), namely the Spirit of Christ. The distinction of the prophetic and apostolic words is highlighted by St. Chrysostom, in his interpretation to the Lord’s words: “that both he that soweth and he that reapeth may rejoice together”(John 4: 36). And the Holy Father wonders; “who is he that soweth, and who is he that reapeth? The prophets are the sowers; but they were not the ones who sowed, the Apostles did”.

In other words, the will of the Prophets was the coming of Christ to the people. This is the will of today’s honoured holy Prophet Elisha, that Christ may come and dwell in our hearts.

Let us therefore my brethren in Christ our God and Saviour, entreat the holy and wondrous Prophet Elisha along with the Fathers who are co-celebrated with him, Methodios Archbishop of Constantinople and Hieromartyr Cyril, Bishop of Gortyna of Crete, and say along with the hymnographer: “O Elisha, ask that they who sincerely sing thy praise may receive from God healing of their maladies and the cleansing of their sins”(Matins Ode 1, troparion 3). And release us and the whole world from the pandemic of the coronavirus plague, so that the Name of the Father and of the Son and of the Holy Spirit may be glorified in thee. Amen”.

After the Divine Liturgy, the prayer for the grapes was read, and there was a reception at the Hegoumeneion.