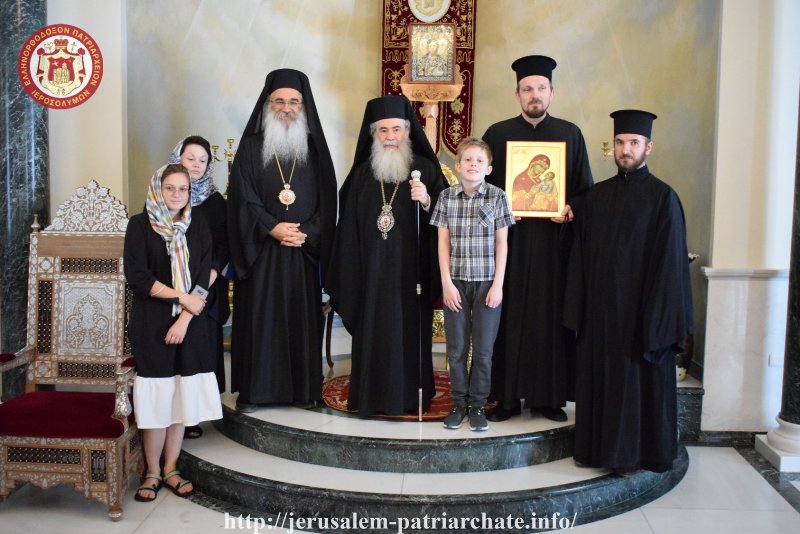 ORDINATION OF A PRIEST FOR THE RUSSIAN FLOCK

After the decision of the Holy and Sacred Synod, Chaired by H.H.B. our Father and Patriarch of Jerusalem Theophilos, on Saturday morning, May 31/June 13, 2020, during the Divine Liturgy at the Horrendous Golgotha, His Eminence Archbishop Aristovoulos of Madaba ordained to Priest the Deacon Alexander Yasevich, who has been serving at the Russian-speaking Community in Be‘er Sheba, and will continue his ministry there as a Priest from now on.

His Eminence the Archbishop of Madaba addressed the ordained with the following fatherly words;

Two years ago, we gathered in this Holy Place, the horrendous Rock of Golgotha, to participate in your ordination to the first degree of Priesthood and to witness the alteration of the “Right hand of the Most High”. At the same Holy Place we gathered again today to rejoice together, to celebrate the coming of the Comforter, the feast of the Holy Pentecost and at the same time to witness your promotion to the second degree of Priesthood.

Two years ago, you entered the All-holy Church of the Resurrection as a simple pilgrim and after the completion of the ordination you departed as an angel, a minister of the Holy Mysteries. Today, you arrived at the Horrendous Golgotha as an Angel and in a little while, the divine grace of the All-holy and Ceremonial Spirit will make you partake of “the holy and ultimate degree of the Priesthood, of the interior of the veil dividing the sanctuary from the nave, in the Holy of Holies, where the Holy Angels desire to look down upon and behold with their own eyes the person of the Holy Anafora, and enjoy the Divine and Holy Liturgy”. And again we will witness this unique mystery and exclaim: “this change hath been wrought by the right hand of the Most High”(Psalm 76:10).

Your ordination is not just your personal matter. It is a matter for the whole parish, the members of which have come from southern Israel to support you and rejoice with you, because they are finally getting their own Priest, born and raised in a certain area, in which until recently they used to grow up without being able to be baptized, to celebrate the Feasts of the Church, without the joy of the Church, and in the end to die alone and bury their dead without any ceremony.

By the grace of God we are living in historic moments for the Church of Jerusalem. After 70 years of absolute silence, the holy city of Patriarch Abraham, with the famous well of his treaty with Abimelech, regains its Liturgic life. Since 1948, with the evacuation of the area due to the Arab-Israeli war, the Divine Liturgy in Be‘er Sheba ceased to take place. The only sign that indicated the existence of an old Christian community in the city was the abandoned cemetery in the centre of the Old City.

The dead waited for decades to hear the sound of an incense burner and see a Priest to hold even a sinple memorial service. The old tombs looked like seeds, which were planted in the ground and waited for the right time to take root again and bear fruit. This era came with the fall of Communism and the opening of the borders of the former Soviet Union. Israel was filled with the old Israelites, who spread throughout the land.

However, a portion of these Israelites had one characteristic feature. In addition to the Israelite identity, they brought with them the Christian faith, the Orthodox tradition, the icons, the incense, the fast, the prayer. The Christians became the salt of the local community. They kept their obligations to the state to the fullest. They “ Rendered to Caesar the things that are Caesar’s”, and  now what they should also do was to render “to God the things that are God’s”.

Their desire was to have a Priest enter their house, to sanctify them, to enlighten them and to help them keep the flame of the Faith burning. This wish was fulfilled in 2008, on the feast day of St. Spyridon, when God miraculously led my steps to the Negev Desert to perform the first memorial service and I met the first Christians with the help of the venerable Pilgrim Nina, the name of who reminded me of the sister of St. George the Great Martyr, Saint Apostle Nina, who spread the teaching of the Holy Gospel at the inhospitable territories of Georgia as it was then, in the 4th century AD.

Many visits followed, during which I found for myself the magnitude of the faith, the simplicity and the love of the orphaned Christians of the South. I was happy every time the road brought me close to them. With the passage of time, however, I realized that the harvest is too much for the few workers. I was starting to feel tired because of the long distance from Jerusalem, and I was saddened by my inability to be among the Christians of Be‘er Sheba all the time.

Then a new desire was created for me. To find the right Priest, who will come from and live in Be‘er Sheba, so that he can immediately meet the Liturgical needs of Christians and be always present, whenever the parish demands it.

When we refer to the parish of Be‘er Sheba, we do not simply mean the parish of a district. The area in which we are supposed to serve begins east of Aynn Ghent’s springs on the shores of the Dead Sea to reach west to the coastal Ashkalon and end up as far south as the centre of the city of Eilat having as its centre the capital of the desert, Beer Sheba, , and thus covering an area of ​​more than 12,000 square kilometres. Consequently, the presence of the local Priest was absolutely necessary for the correct execution of the pastoral work in such a large and sensitive area.

The choice on you was not accidental. You appeared at the first Divine Liturgy in Be‘er Sheba and have been present on a daily basis ever since. Your ordination as a deacon coincided with my temporary removal, fortunately not for long. With your help, we have managed to find a new place to house the temporary House of prayer until God deems us worthy to build our own Holy Church, dedicated to Patriarch Abraham, the Holy Patriarch St. Sophronios and the Holy Maccabees.

From now on, your responsibilities will increase. The effort will be great. You must cultivate, above all, patience in temptations. His Beatitude our Patriarch, the Holy and Sacred Synod and all the Fathers of the Hagiotaphite Brotherhood have accepted you into the bosom of the Church of Jerusalem and will support you in your mission. Your wife, who has supported you with her love, will stand by you again. Your beloved daughter Maria, who has devoted herself in the treatment of the sick with medicine, is happy and proud of her father. Your little son Paul stands in your shadow and waits for you to teach him from your experience in the Church. We will all stand by you and strengthen you in your new ministry.

We entreat the Holy Spirit to enlighten you, strengthen you and cover you from temptations. And now leave yourself to the will of God and accept the divine gift of Priesthood, in order to sanctify others and to sanctify yourself personally “.

“Your Eminence, Dear Fathers, brothers and sisters in Christ!

In this joyful and important day for me, being in the holy place of the Golgotha ​​Rock, where the Cross of the Lord God and Saviour Jesus Christ was erected, I would like to thank His Beatitude, our Father and Patriarch Theophilos III, the Holy and Sacred Synod of the Church of Jerusalem and especially Your Eminence Aristovoulos, for the trust you have shown in me.

The Lord brought me to the city of Be‘er Sheba, when you, Your Eminence, began to regularly celebrate the Divine Liturgy there in a small Russian-speaking community, which was located in the Special Homeland of the Patriarch Abraham. After many years, the holy chanting was heard again and the Divine Liturgy began to be celebrated. At that moment, I immediately felt a strong desire to work hard for the Church. I still feel that. In front of me is a large field for action, because the community is developing, and many Russian Christians live in Be’er Sheva and other cities in the south.

After these words, His Eminence placed his hands on the head of the ordained and invoked the Divine Grace which heals all infirmities and completes all things lacking.

The ordained received the acclaiming “axios” by the co-praying Hagiotaphite Fathers, his wife, relatives and community members who came to honour him.

After the ordination, the Episcopal entourage and the ordained paid their respects to His Beatitude and thanked Him.