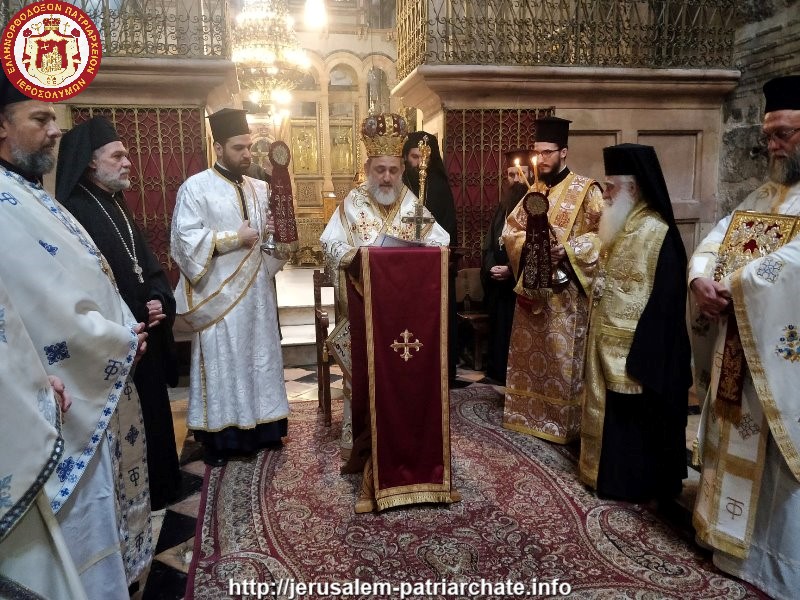 On Wednesday, May 7/20, 2020 the Patriarchate celebrated the feast of the appearance of the sign of thepPrecious Cross in the Heavens.

On this feast, the Church as a whole, and especially the Church of Jerusalem, commemorates the event that in the year 351 A.D., when St. Cyril was the Archbishop of Jerusalem, at the third hour of the day which was the day of Pentecost, the Cross appeared in the Heavens shining more than the brightest stars and the sun rays. The Holy Cross was visible from the Horrendous Golgotha and as far as the Mount of Olives, as the same St. Cyril Archbishop of Jerusalem describes it in his letter to the Emperor Constantius, son of Constantine the Great.

This event was celebrated with the Divine Liturgy at the Horrendous Golgotha, which was led by His Eminence Metropolitan Joachim of Helenoupolis, at the chanting of Hierodeacon Simeon and Mr. Vasilios Gotsopoulos. Only a few people were present due to COVID-19.

The Divine Liturgy was followed by a procession three times around the Holy Sepulchre, with the participation of other Archbishops who came from the Patriarchate.

After the procession, the officiating Metropolitan read Archbishop Cyril’s letter in Greek before the Sacred Edicule, while Archimandrite Meletios read it in Arabic.

After the Divine Liturgy, the Episcopal entourage paid their respect to His Beatitude at the Patriarchate. There, His Eminence Metropolitan Joachim of Helenoupolis referred to the wondrous appearance of the Cross as it is described in the letter written by Archbishop Cyril of Jerusalem.