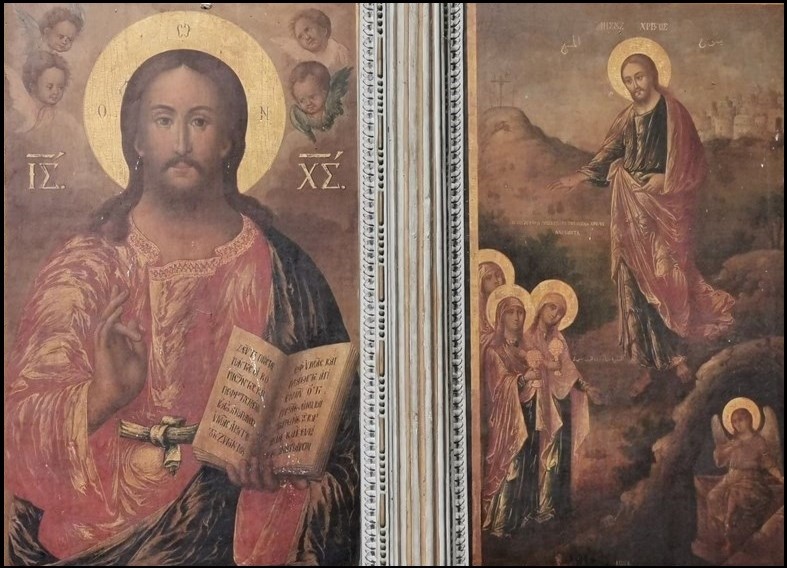 THE FEAST OF JOSEPH OF ARIMATHAEA AT THE PATRIARCHATE

On Sunday, April 20/ May 3, 2020, Sunday of the Myrrh-Bearers according to Pentecostarion, the Patriarchate celebrated the commemoration of Joseph of Arimathaea at his Holy Monastery in Remli, ancient town of Arimathaea, which was his hometown.

On this feast the Church commemorates that righteous Joseph went to Pilate and asked Jesus’ body, and having received it, he buried it with the help of the myrrh-bearers near the place of His crucifixion.

The feast was held within the frame of the safety measures due to COVID-19, and was led by His Eminence Archbishop Damascene of Joppa under the hospitality of the Hegoumen of the Monastery Reverend Archimandrite Niphon, with the participation of only a few faithful Christians.

His Beatitude sent the following Sermon to Remli Community;

“Joseph of Arimathaea, an honourable counsellor, which also waited for the kingdom of God, came, and went in boldly unto Pilate, and craved the body of Jesus” (Mark 15:43). “And when the sabbath was past, Mary Magdalene, and Mary the mother of James, and Salome, had bought sweet spices, that they might come and anoint him” (Mark 16:1).

Our Lord Jesus Christ who has caused the light to rise and shine all over the universe, has gathered us all in the Biblical town of Arimathaea, the home town of Joseph, so that along with Nicodemus and the myrrh-bearers we may celebrate their feast.

In the detailed description of the three-day burial and resurrection of Christ, the Holy Evangelists Matthew, Mark, Luke and John commemorate especially the myrrh-bearing women, Joseph and Nicodemus, the secret disciples of Christ. Because their immediate and noble care of the burial of Jesus’ immaculate body is an irrefutable witness. The myrrh-bearing Women were the first true witnesses of the resurrection of the Lord, while Joseph and Nicodemus were the witnesses of His burial. “And he that saw it bare record, and his record is true: and he knoweth that he saith true, that ye might believe”, St. John the Evangelist writes (John 19:35).

And St. Cyril of Alexandria says regarding Jesus’ burial; “in the mouth of two or three witnesses every word may be established” (Matthew 18:16). “For two were those who buried Him, Joseph and Nicodemus, who had their mind and faith in God and did not prefer the earthly glory nor its honour…by their free faith they received the permission and were shown to be devoted and dear guardians of our Saviour’s command”. The resurrection, my dear brethren is the crown of the mystery of the Divine Providence, as St. John Damascene says; “Now the hidden mystery of the ages of old is being revealed; now the chapter of the Divine Providence is being fulfilled; now the crown of the Incarnation of God the Word is being put into place; now the abyss of the Divine Love is being published. For God the Word loved the world so much, so that by the providence of God the Father He came down and became incarnate, and took upon Himself our body while being bodiless, so that He might suffer by partaking in the passions and become passion to death, in order to cover with apathy, us, who suffer from the passions” (St. John Damascene, Sermon on Holy Saturday).

The extreme power of the Resurrection is due to this fact, that “by becoming a passion to death, [Christ] dressed us [the people] who suffer from the passions, with apathy”. St. John Damascene formulates this clearly in his Paschal Hymn; “The only blessed and most glorious God of our Fathers, who hath redeemed the Children from the furnace, is become man, and as a mortal doth suffer, and through suffering doth cloth mortality with the grace of incorruption” (Katavasia of Pascha, Ode 7).

In other words, He who took upon Himself our nature with all the passions except sin, suffers passions as a mortal and especially the death on the Cross. Through the passions and the resurrection, Christ renews the human nature that He took upon Himself, and clads it with the beauty of incorruption, as Prophet David says; “The Lord reigneth, he is clothed with majesty” (Psalm 93:1).

This immense philanthropy and excessive goodness of God is being preached by St. Gregory the Theologian who says; “He that Is, becomes poor with my flesh so that I may become rich with His divinity; and He who is full is emptied;  He is emptied from His glory for a short while, so that I may partake of His fullness. What is the richness of goodness? What is this mystery that concerns me? I partook from the image and did not keep it; He takes upon Himself my flesh, so that He may save the image and make the flesh immortal.”

Here St. Gregory talks about the salvation of the image through the Incarnation of God the Word, namely of the soul and the immortality of the human body.

Moreover, interpreting the Lord’s words, “Our friend Lazarus sleepeth” (John 11:11) Cyril of Alexandria says that Jesus “calls sleep the departure of the soul from the body”. And elsewhere the Father says; “the acquired corruption defiles the nature of man, and death shall prevail by evil hatred, having sin as a root.”

In this the victory and the power of Christ resurrection is made obvious, namely in the abolishment of the death of the acquired corruption, namely of sin, through Christ’s death. Let us therefore hear St. John Damascene saying; “For if the sacred soul of the life-giving and immaculate body was divided, nevertheless the divinity of the Word after the conception in the womb of the Holy Virgin Theotokos Mary, remained inseparable, the two natures in one hypostasis, an undivided unity, of the soul and body; and thus the one hypostasis of Christ remained in this death, being God the Word in body and soul, and after death also this very one hypostasis. For this reason, “That at the name of Jesus every knee should bow, of things in heaven, and things in earth, and things under the earth; And that every tongue should confess that Jesus Christ is Lord, to the glory of God the Father” (Philippians 2:10-11).

Behold therefore, my dear ones, why Pascha, or better say, the Day of Resurrection of our Lord and Saviour Jesus Christ is recognized as the day of the inauguration of the unwaning Kingdom of God, to which we are called to participate by the hymn writer. And behold why today we honour the commemoration of Joseph and Nicodemus along with the myrrh-bearers. For they all were fervent preachers of Christ’s resurrection.

As, for us, let as say along with the hymn writer; “When thy Son destroyed all the might of death, O Virgin, as the mighty God He exalted and deified us with Himself by His Resurrection. Wherefore, we sing His praise unto the ages” (Pentecostarion, Sunday of the Myrrh-Bearers, Matins, Canon 8, 2nd troparion of the Theotokos). Christ is risen!”

On this Sunday the Patriarchate also celebrated the commemoration of the myrrh-bearing Women, who buried the Lord along with Joseph and were the first ones to hear that the Lord was risen from the dead by the angel who was sitting at the Tomb’s stone, early at dawn of the first Saturday.

The commemoration of the myrrh-bearers was celebrated at their chapel in the courtyard of St. James the Brother of God Cathedral and at the Church of the Holy Sepulchre.

The celebration was held by St. James’ Cathedral parish, led by the participation of His Eminence Archbishop Demetrios of Lydda, with only a few faithful Christians present, again due to the COVID-19 measures. The chanting was delivered by Hierodeacon Simeon and Monk Nikolaos on the right in Greek, and by Mr. Rimon Kamar on the left in Arabic.

A modest reception followed the service at the Cathedral’s office.

Early in the morning of the same day, His Beatitude our Father and Patriarch of Jerusalem Theophilos celebrated the Divine Liturgy at the H. Monastery of the Transfiguration on Mount Tabor, where He read the following Sermon;

“Jesus said unto her, I am the resurrection, and the life: he that believeth in me, though he were dead, yet shall he live: And whosoever liveth and believeth in me shall never die” (John 11:25-26).

The beyond comprehension condescension and philanthropy of our Lord and God towards us, has gathered us all in this holy place of Tabor where for the first time “his face did shine as the sun, and his raiment was white as the light” (Matt. 17:2), in order to celebrate the Paschal commemoration of the myrrh-bearing Women; and of the secret disciples Joseph of Arimathaea and Nicodemus.

“For great is the mystery of the Divine Providence, which cannot be comprehended only through faith, but it needs purity of soul which is consistent with divine desire and fear. For there is no other way to work purification, but through divine fear and love. Also, it is not possible to receive the divine enlightenment, if the eyes of the soul are not cleansed beforehand. For every divine gift is unapproachable to the profane ones; for only the ones that are pure in heart shall see God, as Christ, the only truth indeed says” St. John Damascene preaches.

“Let us purify our senses and we shall behold Christ, radiant with the unapproachable light of the Resurrection, and we shall clearly hear Him say: Rejoice! As we sing the triumphant hymn”, the hymn writer of the Church proclaims (Canon of Pascha Ode 1 troparion 2).

Christ’s Resurrection is “the living way, which he hath consecrated for us, through the veil, that is to say, his flesh” (Hebrews 10:20) according to St. Paul. And this way is the one which leads us to the eternal Kingdom as Ecumenios and Zigavinos interpret respectively; “He [Christ] has initiated it” and “He was the first one who walked on it”. And according to the hymn writer; “Christ is the Pascha that openeth the gates of Paradise for us”.

Behold therefore, why St. Paul advices us; “If ye then be risen with Christ, seek those things which are above, where Christ sitteth on the right hand of God. Set your affection on things above, not on things on the earth” (Col. 3:1-2). “Mortify therefore your members which are upon the earth…seeing that ye have put off the old man with his deeds; And have put on the new man, which is renewed in knowledge after the image of him that created him” (Col. 3:5, 3:9-10). And in more detail; mortify your body parts that desire the  earthly pleasures and delights, having first removed from yourselves the old corrupt man along with his actions and even more since you are dressed with the new man, who is continuously renewed.

The established Father of the Church St. John Damascene, says after St. Paul’s preaching; “Christ on the Cross; for ye are partakers of His sufferings (2 Cor. 1:7), “and also a partaker of the glory that shall be revealed” (1 Peter 5:1). Christ is among the dead; let us mortify our flesh to sin, in order to live in righteousness. Christ is wrapped up in clothes for the dead; let us cleanse ourselves of the old lump and become a new leaven (Gal. 5:9), in order to become the den of Christ. Christ is in Hades; let us go down along with Him to the humility that elevates, in order to rise, and stand and be glorified along with Him, always beholding God, and being seen by Him.”

We, my dear ones, who have been vivified through the death of our Lord and Saviour Jesus Christ, let us say along with the myrrh-bearing women and the secret disciples Joseph and Nicodemus, who became preachers and witnesses of the three-day burial and resurrection from the dead of our Christ: Let no one fear death; Christ is risen! To Him belongs all glory and the power unto the ages of ages! Amen.”