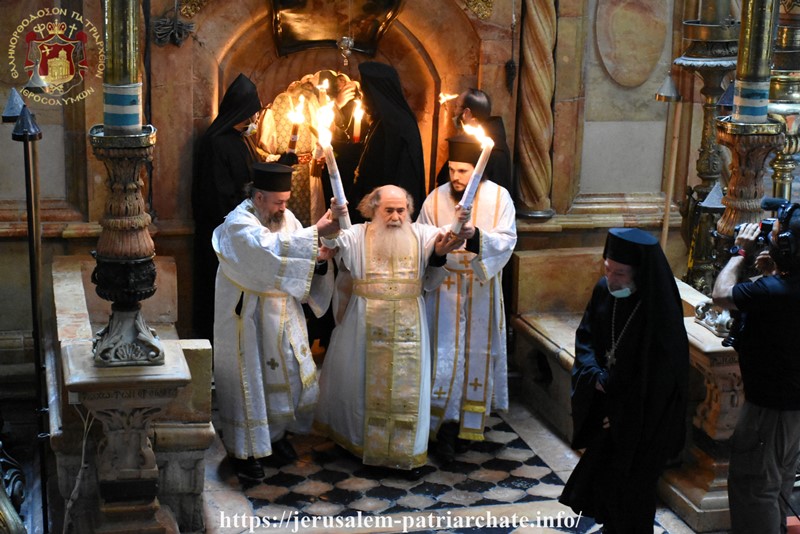 At noon on Holy Saturday, April 5/18, 2020, the Service of the Holy Light was held by the Patriarchate, according to the established typikon order of the Status Quo.

H.H.B. our Father and Patriarch of Jerusalem went down to the Church of the Holy Sepulchre through St. James’ Cathedral staircase at 12.00 noon /13.00 p.m. summer time, and entered the Holy Altar to give His blessing to the Armenians, Copts and Syrians in order to receive the Holy Light.

A procession three times around the Sacred Edicule followed and His Beatitude then entered the Holy Sepulchre, while the Armenian representative stood at the entrance by the Angel’s stone.

After praying, the Patriarch received the Holy Light from the Holy Sepulchre and initially gave it through the south opening and then from the entrance of the Edicule to the Fathers. There were no pilgrims due to the plague.

His Eminence Archbishop Demetrios of Lydda took the Holy Light to the representatives of the Embassies of the Orthodox Countries and Churches, – to the Consul General of Greece in Jerusalem Mr. Christos Sophianopoulos to convey It to the Church of Greece – . The Holy Light was transferred to the airport and handed in to the representatives of the countries who remained inside the airplanes.

The Holy Light was transferred to the Arab-speaking Communities of the Patriarchate in Israel, Jordan, the Palestinian Autonomy and Gaza by individual appointed representatives.