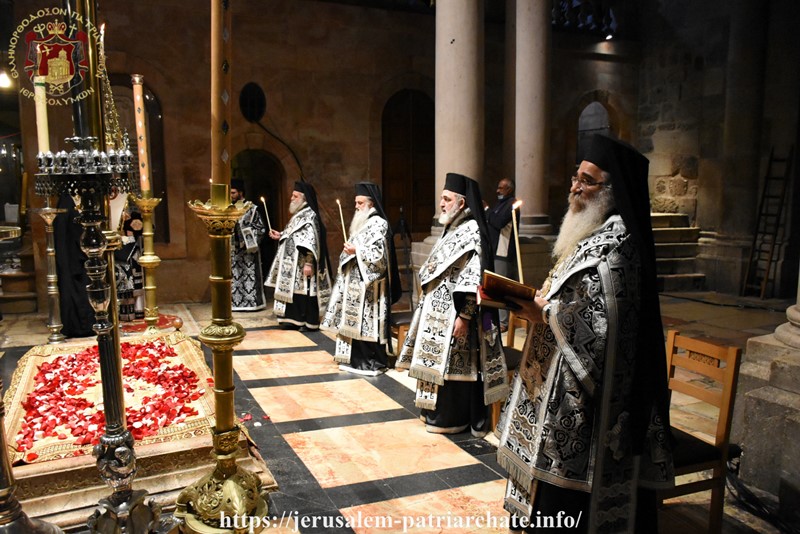 On Good Friday evening, April 4/17, 2020, around 9.00 p.m., the modest, contrite but nevertheless magnificent Epitaph Service was held at the Church of the Holy Sepulchre by the Patriarchate. On this Service the Church commemorates the burial and descent in Hades of our Lord Jesus Christ after His crucifixion. There, the Lord preached the message of salvation and release from the darkness and the torments of hell to the departed ones by saying; “come back again into Paradise”. This Service, which is actually the Matins of Holy Saturday, included the Six Psalms, the Canon of Holy Saturday, the procession around the shrines in the Church of the Holy Sepulchre, concluding in Horrendous Golgotha.

There, after the reading of the Gospel narrative and the veneration, the Archbishops took the silk corporal of the Epitaph from the Holy Altar of Golgotha and placed it on the Deposition slate, where the Gospel of the deposition was read.

A procession three times around the Sacred Edicule followed and then the silk corporal was placed on the Holy Tomb. The Lamentations were chanted afterward, and the rest of the Service continued with the blessings, praises, Doxology and the Sermon of His Eminence Archbishop Aristarchos of Constantina as follows;

This evening of Holy Friday, the Church experiences the crucifixion of the Son and Word of God, our Lord Jesus Christ of Nazareth. – “Today hangs upon the wood the One who has hung the earth upon the waters – the bridegroom of the Church has been pierced with nails” -, and with the dawn of Holy Saturday the Church experiences His burial in the flesh – “Thou who art the life hast gone down into the grave O Christ, and the orders of angels marveled – removing Thee from the wood, Joseph of Arimathea buries Thee in a grave”.

The Church lives these two events today, drawing the details from the eye-witnesses of the Holy Scriptures, co-crucified with the One who was crucified for her, and being buried along with Him, who was buried as a mortal man, and went down in Hades.

Commemorating these, the Church believes that Christ’s crucifixion was done by the free will and decision of His crucifiers, foreknown, but not predestined by God. The crucifiers were unable to tolerate that He was the Incarnate Son and Word of God who came on earth, and therefore condemned Him to death. The Church prays for the remission of their sin, just like He asked from the Cross “Father, forgive them; for they know not what they do” (Luke 23:34). Jesus had the power to avoid this death, either as man or by His divine power, however He came into it willingly. Having been betrayed, arrested, mocked, “He was led as a sheep to the slaughter; and like a lamb dumb before his shearer, so opened he not his mouth” (Acts 8:32). As the Apostle of the nations says: “For when we were yet without strength, in due time Christ died for the ungodly. For scarcely for a righteous man will one die: yet peradventure for a good man some would even dare to die. But God commendeth his love toward us, in that, while we were yet sinners, Christ died for us” (Romans 5:6-8). By the humility and the kenosis on the Cross, Christ conquered the opposing power and even death. For the Church, Christ’s Cross is the beginning of existence, of life and its resurrection. For this reason, it sings: “we venerate Thy Cross, O Christ and Thy resurrection we worship and glorify”. Therefore St. John Damascene says “His precious Cross is above all the wondrous things Christ worked… and truly the precious and sacred wood, on which Christ placed Himself as a sacrifice for us, is sanctified by the touch of His Holy Body and Blood, it is venerated, [along with] the nails, the lance, the garments, the holy places which are the manger, the cave, Golgotha, the redeeming, life-giving Tomb, Sion, the Acropolis of the Churches, and the like, as Prophet David says, We will go into his tabernacles: we will worship at his footstool (Psalm 132:7).” (St. John Damascene Edition of the Orthodox Faith).

His feet stood at the place of Horrendous Golgotha. There, during the reign of Pontius Pilate, God “worked salvation in the middle of the earth”. By the Cross of His Son, He united Jews and Greeks in one body, one nation, one Church. He called us, the nations which did not know God, which where far away from Him, to the message of His reconciliation, and we, the gentiles, having accepted this, became friends of God, “That the Gentiles should be fellowheirs, and of the same body, and partakers of his promise in Christ by the gospel” (Ephesians 3:6). God grafted us into the body of the Church. Joining the body of the Church we were taught to live with our fellowmen on earth in reconciliation, righteousness, peace and love, even love towards our enemies, remembering that “our conversation is in heaven” (Philippians 3:20).

However, God’s love for man, Who “spared not his own Son, but delivered him up for us all, how shall he not with him also freely give us all things?” (Romans 8:32), according to St. Paul, has included in the providence of salvation through the cross not only us, the living on earth, introducing us to the path of salvation, but also  the dead, those who were captives of Hades, dwelling in the darkness and the shadow of death, awaiting redemption. Through the Cross, the Son of God went down into Hades, as the One Who has power over both the living and the dead and sought the lost sheep in its darkness, as He did on earth; He sought the fallen man, Adam and his descendants, and in the lightning of His Divinity drew them up saying; “come back again into paradise”. The first to enter paradise was the thief on the cross, who used repentance as the key to it; “Remember me O Lord, in Thy Kingdom”. As St. John Damascene says; “just as the sun of righteousness rose on earth, the deified soul of Christ went down into Hades so that the light might shine upon those who were in the darkness and the shadow of death under the earth…and having released those bound there of old, immediately He departed from the dead, opening the way of resurrection for us” (Publ. of the Orthodox Faith).

The Church of Jerusalem, “which was the first to receive the remission of sins through the resurrection”, boasts for Christ crucified, and praises Him as the one who has fallen asleep in the flesh, today with the epitaph hymns, in this contrite modest Service, officiated by its Primate, His Beatitude the Patriarch of Jerusalem Theophilos, and prays along with Him, from the empty blessed tomb, that the Lord may look down upon the vineyard of His flock all over the world and guide it and lead it to the glory of the resurrection, and that He may not forsake those who are tested by the deadly virus of the plague, locally and universally, but by His healing power and mercy, He may lead them to refreshment, health, good life and prosperity, and may favorably look down upon the Christians of the Middle East and all who dwell in the Holy Land, wishing to all a joyful, gleeful and blessed Resurrection.”