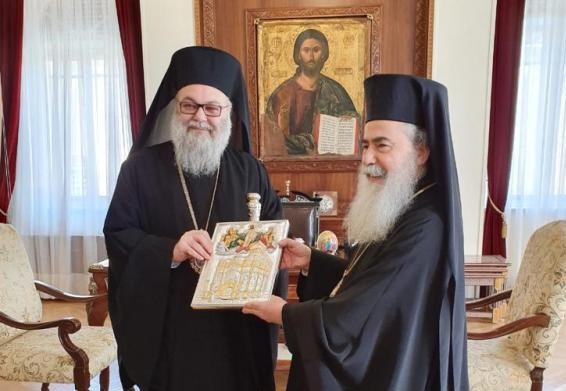 PATRIARCH TEHOPHILOS: CONCRETE UNDERSTANDINGS WITH ANTIOCH OVER QATAR; OUR ORTHODOX UNITY IS MOST PRECIOUS

It was asserted by Patriarch Theophilos that since the two Primates met together mid last year in Cyprus dialogue has been taking place between the two Patriarchates on the matter.

In today’s Synod, Patriarch Theophilos positively commended the position of His Beatitude Patriarch John X in welcoming Jerusalem’s initiative for Orthodox Unity being held as the “Amman Fraternal Gathering” even though a resolution between both Patriarchates, regarding Qatar, had not yet been concluded.

Patriarch Theophilos briefed the members of the Synod that, with gratitude to the Almighty, in the last weeks, concrete understandings have been reached with Antioch for a resolution to this matter.

His Beatitude concluded that Jerusalem is looking forward to next week’s familial gathering of Orthodox Primates, with hope for continued dialogue towards the precious unity amongst brothers, as well as keenness for the opportunity to further discuss with His Beatitude Patriarch John X of Antioch in order to reach a final agreement on the matter of Qatar.