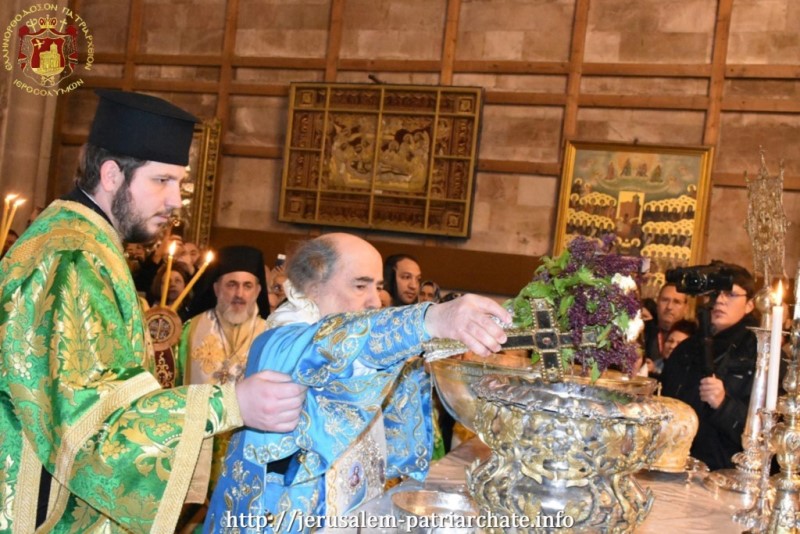 THE FEAST OF THEOPHANY AT THE PATRIARCHATE

On Sunday, January 6/19, 2020, the Patriarchate celebrated the Lord’s Feast of Theophany, as a commemoration of the Baptism of our Lord and God and Saviour Jesus Christ in the river Jordan.

The feast was celebrated in the beginning with the Service of the Great Sanctification of the Waters at the Catholicon of the Church of the Holy Sepulchre by H.H.B. our Father and Patriarch of Jerusalem Theophilos, with the co-celebration of Archbishops and Priests of the Patriarchate.

At the end of the Service of the Sanctification of the Waters at the Catholicon, the Divine Liturgy was celebrated at the Holy Sepulchre, officiated by His Beatitude with the co-celebration of the Archbishops of the Patriarchate; His Eminence Metropolitan Isychios of Kapitolias, and Their Eminences the Archbishops; Aristarchos of Constantina, Methodios of Tabor, Demetrios of Lydda, Philoumenos of Pella, the Most Reverend Metropolitan Joachim of Helenoupolis and His Eminence Archbishop Aristovoulos of Madaba, Hagiotaphite Hieromonks, with first in rank Elder Kamarasis Archimandrite Nectarios, and Priests from other Churches. The chanting was delivered by Hierodeacon Simeon and Archimandrite Demetrios as the services were attended by a large congregation of pilgrims.

After the Dismissal of the Divine Liturgy, His Beatitude sanctified the congregation with the Holy Cross and returned to the Patriarchate Headquarters, where many pilgrims received His blessing.

Later on, the Priests of the Church of the Holy Sepulchre and of Saint Constantine sanctified the houses of the Hagiotaphite Fathers and of the Christian citizens in the Old City.