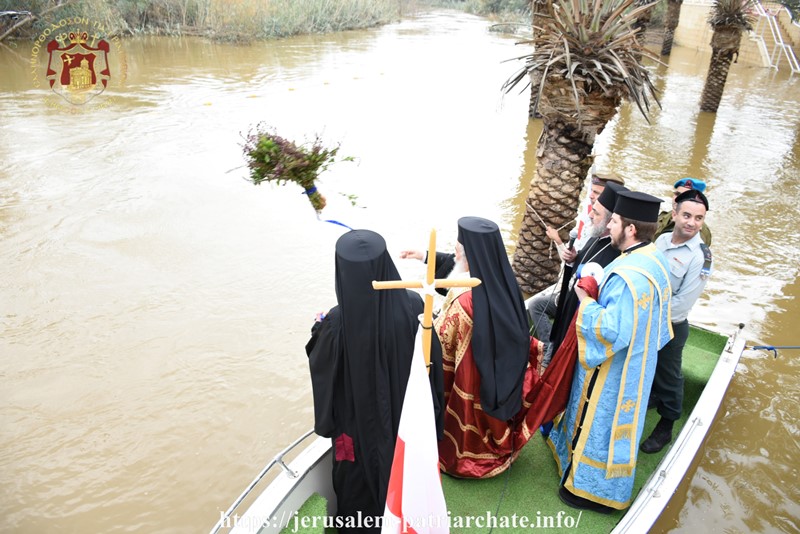 THE FOREFEAST OF EPIPHANY AT THE PATRIARCHATE

On Saturday January 5/18. 2020, the Forefeast of Epiphany was celebrated according to the following Typikon:

In the morning, Matins and the Divine Liturgy of St. Chrysostom were celebrated with the participation of H.H.B. our Father and Patriarch of Jerusalem Theophilos at the Monastic Church of Saints Constantine and Helen, with the attendance of the Reverend Hagiotaphite Fathers, Hieromonks, Deacons and Monks.

Before the end of the Divine Liturgy, Epiphany troparia were chanted and then His Beatitude performed the Service of the Small Sanctification of the waters, while the apolytikion of the Feast “when Thou were baptized in the Jordan” was being chanted.

Having sanctified the Fathers and the Congregation, His Beatitude returned to the Patriarchate Reception Hall in procession, where the ministering Priest of Saint Constantine sanctified the Hall, followed by the ministering Priest of St. James Cathedral, who came after the Divine Liturgy and the Sanctification of the waters which were officiated by His Eminence Archbishop Philoumenos of Pella.

Immediately afterward, His Beatitude departed to Jericho. There, He visited the Hegoumeneion of the Monastery of Prophet Elisha, the Prefecture, and passing through the iron border Gate between the Palestinian Autonomy of Jericho and the Israeli Military and Civilian Administration, He reached the Monastery of St. John the Forerunner, where He was warmly received.

The Blessing of Bread took place at the Monastery, at the presence of the Consul General of Greece in Jerusalem Mr. Christos Sophianopoulos, and Mr. Harry Theoharous, Minister of Tourism of Greece, and then a procession from the Monastery to the river Jordan followed.

The Services of Vespers and of the Sanctification of the Waters were held there on a platform, and finally His Beatitude went down to the river Jordan, boarded a boat and from there He threw the Cross in the river, as the choir was singing “When Thou wast baptized in the Jordan”. This happened at the very place where our Lord was baptized for our freedom and salvation and the Holy Trinity was revealed to us; our Lord Jesus Christ, the Holy Spirit in the form of a dove and the voice of the Father saying: “This is my beloved Son in whom I am well pleased”.

After the Service of the Sanctification of the Waters, Archimandrite Bartholomew, the renovator of the historic Holy Monastery of St. John the Forerunner, offered a reception and a meal to the Patriarchal Entourage.