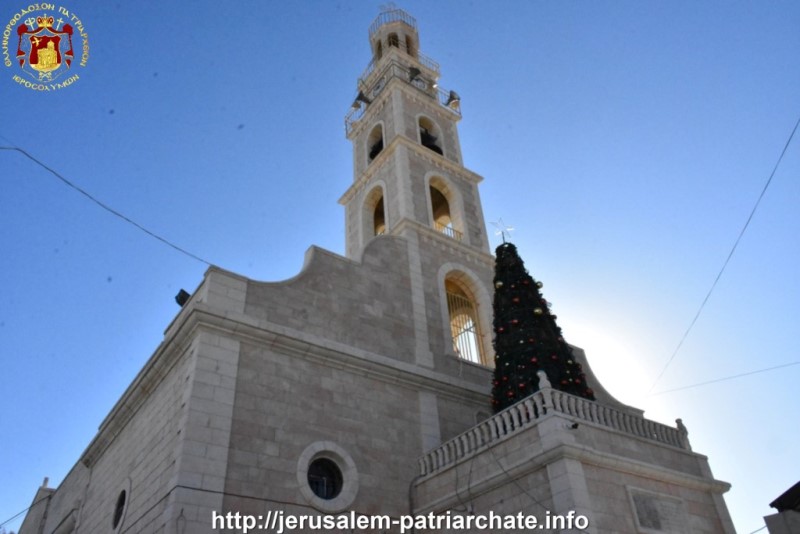 THE SUNDAY OF THE FOREFATHERS AT THE PATRIARCHATE

This Feast was celebrated in full congregation at the town of Beit Sahour, near Bethlehem, at the beautiful Church which is dedicated to the Forefathers.

The Feast was officiated by the Most Reverend Archbishop Philoumenos of Pella, with co-celebrants; the Hegoumen of the Shrine of the Shepherds, Archimandrite Ignatios, Archimandrite Demetrios, and Hierodeacon Eulogios, the Deacon and Ministering Priests of the Community, Fr. Savva Her, Fr. Issa Mousleh, and Fr. George Banoura, with the participation in prayer of the Patriarchal Representative in Bethlehem Most Reverend Archbishop Theophylactos of Jordan, the Ministering Priest of the Church Fr. Ioannis Rasmawi, and the Spiritual Father of the H. Monastery of St. Savvas the Sanctified Archimandrite Eudokimos. The chanting was delivered by the Church choir in Arabic with the participation of the full congregation praying in contrition. Present at the Liturgy was also the Consul of Greece Mrs. Katherine Tzima.

The Divine Liturgy was followed by the Scouts parade and a reception at the reception hall, as well as a meal later, offered by the Community and Mr. Abu Aeta, for the Episcopal entourage and others.