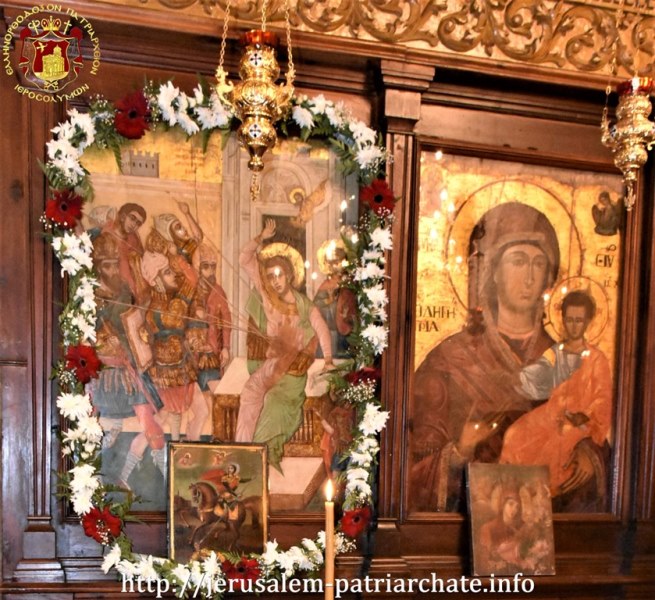 THE FEAST OF ST. DEMETRIOS THE GREAT MARTYR AND MYRRH BEARER AT THE PATRIARCHATE

On Friday, October 26/ November 8, 2019, the Patriarchate celebrated the commemoration of the Holy Great Martyr Demetrios the Myrrh Bearer at his chapel in the Central Monastery next to St. Demetrios School.

According to the Church, St. Demetrios came from Thessalonica, he believed in Christ and blessed Nestora to win the combat with Lyaios, and when this was made known both Demetrios and Nestoras martyred for Christ during the reign of Diocletian. Since then St. Demetrios has remained the patron Saint of his city Thessalonica and gushes out myrrh from his grave in the city for its citizens and all who come and pray for his protection.

In honour of St. Demetrios, Vespers was held in this chapel in the afternoon, and the Divine Liturgy was celebrated in the morning of the feast, led by the Most Reverend Archbishop Theophanes of Gerassa, with co-celebrants the Hagiotaphite Hieromonks Archimandrites Porphyrios and Ieronymos, Arab-speaking Priests and Hierodeacon Eulogios. The chanting was delivered by Novice Monk Constantinos and the Patriarchal School of Zion students on the right and by the Typikon Keeper Archimandrite Alexios on the left.

The officiating Archbishop gave a Sermon to the congregation praising St. Demetrios for his courage and strength during his martyrdom.

During the Divine Liturgy, H.H.B. our Father and Patriarch of Jerusalem Theophilos visited the chapel escorted by Hagiotaphite Fathers, while after the Liturgy there was a reception at the adjacent School for the Episcopal entourage and all who celebrated the feast, under the care of the School Principal Mr.Samir Zananiri, the teachers and the students. The synaxarist of the Saint was read and the students recited poems and danced traditional dances of Greece and Palestine.