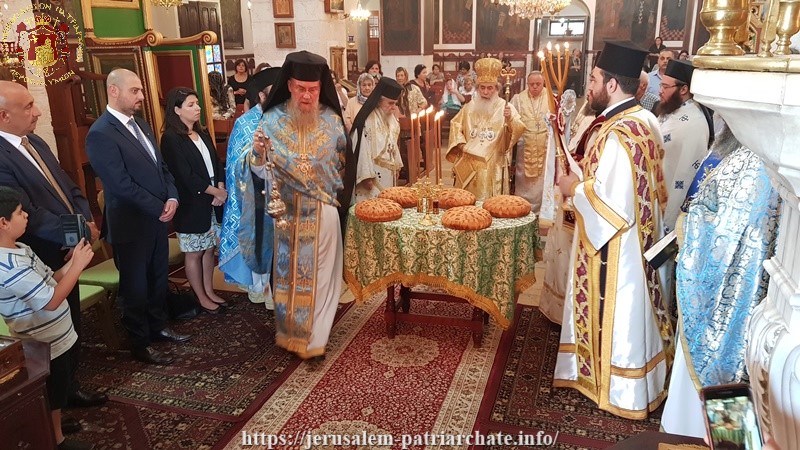 On Sunday, September 9/22, 2019, the feast of the Nativity was celebrated with one-day transference at the beautiful and magnificent Church of the Nativity of Theotokos in the Greek-Orthdodox Arab-speaking community of Beit Jala

On this feast, most reverently honouring the Mother of God, the Greek-Orthodox Community of Beit Jala thanked festively God for His present to humanity, namely of Mary, who was given to her parents Joachim and Anna, in order for her to become the Mother of God and bear in the flesh our Lord Jesus Christ, the Redeemer of the world, by the Holy Spirit.

The full congregation of this feast was led by H.H.B. our Father and Patriarch of Jerusalem Theophilos, with co-celebrants the Secretary-General, Most Reverend Archbishop Aristarchos of Constantina, and the Patriarchal Representative in Bethlehem Most Reverend Archbishop Theophylaktos of Jordan, the Hegoumen Archimandrite Ignatios, Archimandrite Ieronymos, the ministering Priests of the Church Fathers George, Yusef, Paul and Elias, Archdeacon Mark and Deacon Eulogios. The chanting was delivered by the Beit Jala choir in Arabic and Greek, as the service was attended by the Consul Mrs. Katherine Tzima and a large congregation which had filled the Church.

His Beatitude delivered the following sermon to this congregation;

“Adam is set free and Eve danceth with joy, and I spirit they cry unto thee, the Theotokos. For through thee, we were delivered from the curse of our first father, when Christ appeared” St. Andrew of Crete the hymnographer proclaims.

The grace of the Holy Spirit and the divine power of the Most High that overshadowed the blessed Virgin Mary has gathered us in this Holy Church in order to celebrate and faithfully venerate her Holy Nativity according to God’s promise; through whom we have been saved from the ancient curse, with the epiphany of Christ the new Adam.

The Nativity of the Ever-Virgin Mary was foretold by the Holy Prophets and especially by Prophet Isaiah saying; “Therefore the Lord himself shall give you a sign; Behold, a virgin shall conceive, and bear a son, and shall call his name Immanuel” (Isaiah 7:14).

This son of the Virgin is no other than the “Sun of righteousness” namely the new Adam, Christ the Saviour of the world and redeemer from the corruption and death, as very clearly the hymnographer states; ““Thy Nativity, O Theotokos, hath proclaimed joy to the whole world; for from thee hath dawned the Sun of Righteousness, Christ our God, annulling the curse and bestowing the blessing, abolishing death and granting us life everlasting”.

From the curse of corruption and death, namely of the Law of the Old Testament did Christ redeem us, as St. Paul says: “Christ hath redeemed us from the curse of the law, being made a curse for us: for it is written, Cursed is every one that hangeth on a tree” (Gal. 3:13). Interpreting these words, the Great Father of the Church Athanasios says: “Christ became a curse…by accepting the cursed death”.

For this reason, the Nativity of Theotokos, according to the hymn writer; “Hath proclaimed joy to the whole world”. And we wonder; what is this joy? It is the universal and historic event that the Nativity of Theotokos by her righteous parents Joachim and Anna proclaimed three things; firstly, that Christ is the fulfilment of the Law of Moses and of the Prophets, secondly, the union of the human nature with the divine in Christ through the pure blood of the Virgin Mary by the Holy Spirit, and thirdly the revealing of the truth in Christ.

Let us hear in that case St. Sergius the Hagiopolitis saying; “She is born, the Mother of our God, and with her the world is made new. She is brought forth, and the Church is arrayed with her proper majesty. She is the holy Temple, the vessel of the God-head, the virginal instrument, the royal bridechamber wherein was accomplished the wondrous mystery”.

The Most Blessed Theotokos and Ever-Virgin Mary is the only person in the world who has been blessed by all people according to her own confession witnessed by Evangelist Luke: “ And Mary said, My soul doth magnify the Lord: for, behold, from henceforth all generations shall call me blessed” (Luke 1:46, 48). And this is so, because Mary the Mother of God has become “higher than all creation for she conceiveth the Creator in the flesh” and “a treasury of our life and the gateway of the unapproachable light” according to the hymn writer of the church.

Indeed my dear brothers and sisters, God’s bride and Ever-Virgin Mary became the “gateway of the unapproachable light” because she received in her womb the fire of the God-head as the hymn writer states; “The bush on the mount unburnt by fire, and the Chaldean furnace cool with dew, prefigured thee plainly, O Bride of God; for thou didst receive in thy material womb the Immaterial God, and wast not consumed. Wherefore, we cry unto Him that was born of thee; Blessed is the God of our Fathers”.

Today’s feast of the Nativity of our Most Holy Lady Theotokos and Ever-Virgin Mary is not only a feast of joy but also a feast of the redemption of the humankind “from the guilt of the offences” as we read in the kontakion of the feast; “Joachim and Anna were freed from the reproach of childlessness, and Adam and Eve from the corruption of death, O immaculate One, by thy holy Nativity, which thy people, redeemed from the guilt of offences, celebrate by crying to thee: The barren woman giveth birth to the Theotokos, the nourisher of our life”.

On His Sermon on the Mount, our Lord Jesus Christ commemorates especially the guilt on the last judgment, saying; “Ye have heard that it was said of them of old time, Thou shalt not kill; and whosoever shall kill shall be in danger of the judgment” (Matt. 5:21). And St. Paul, referring to the results of the Passion and death of Christ says; “He (Christ) also himself likewise took part of the same; that through death he might destroy him that had the power of death, that is, the devil; And deliver them who through fear of death were all their lifetime subject to bondage” (Hebrews 2:14-15).

By saying death, we mean the spiritual death, namely the apostasy of man against God, but also the natural death, which follows. These two kinds of death create fear and cause guilt which paralyzes man psychologically, since he is being threatened by this cruel death.

The incarnation of Christ God the Word, which was made manifest by the undertaking of the human nature from the pure blood of Theotokos, abolished the guilt and the fear of the bondage of death. Man does no longer feel guilty, because God shows from the depths His love toward us, because when we still were full of sin, Christ died for us, as St. Paul says: “But God commendeth his love toward us, in that, while we were yet sinners, Christ died for us” (Romans 5:8).

Behold therefore, why today the Church of Christ rejoices and is glad and behold why we unceasingly bless the Mother of God. Let us then my dear brothers and sisters say along with the hymnographer; “Virginity is alien to mothers, and childbirth is foreign to virgins; in thee, O Theotokos, both were granted. Wherefore, all we the tribes of the earth call thee blest unceasingly”.  Most Holy Mother of God pray to your Son and God for all of us. Amen. Many happy returns!”

Many people came for their sanctification at the sacrament of the Holy Eucharist, while the congregation assisted the choir in the chanting.

After the Divine Liturgy a reception was offered, and a meal at noon, by the Hegoumen Archimandrite Ignatios, and the Priests of the Community Council of the town; His Beatitude addressed all present at the meal as follows;

“Your Excellency Mr. President and respected members of the Church Committee,

“Behold, how good and how pleasant it is for brethren to dwell together in unity!” (Ps. 133:1)

The grace of the Most Blessed Theotokos and Mother of God has deemed us worthy, both clergy and the people to co-celebrate, festively and in Eucharist today, this joyful day of the regeneration of the world on the one hand; and the “decorum of the Church” on the other, namely the Nativity of the Mother of God.

Our Holy Church is rejoicing in gleefulness today, because, as the hymnographer also says, “the Mother of Life is born today, dispersing the darkness. She is the restoration of Adam and the recalling of Eve, the fountain of incorruption and the release from corruption, through whom we have been deified and delivered from death”.

In these God-inspired words of St. Sergius the Hagiopolitis (of Jerusalem) we have the description of “what is the breadth, and length, and depth, and height” (Eph. 3:18), as St. Paul says on the mystery of the Divine Providence, namely of our Holy Church, the mystical body of Christ;  “For we are members of his body, of his flesh, and of his bones” (Eph. 5:30) according to St. Paul.

This means that the Church of Jerusalem, the Patriarchate which is known as Roum Orthodox along with the Hagiotaphite Brotherhood, are the premium of the eternal presence of its Christian congregation on the one hand, and of the guarantee of its origin and ancestry on the other.

And we say this, because our Christian youth is facing many and various difficulties today, with prominent among them the identity and origin crisis. This is a phenomenon experienced by all Christian Communities, that is why an alert-campaign has been launched.

Our Roum Orthodox Patriarchate has never ceased to care for its flock, especially for the education of the youth. The dialogue of Christ’s love solves all problems and not the public politicized conflicts. Regardless of their social status, people come and go because they are subjected to the laws of corruption and death. However, the institution of the Patriarchate and of the Church is not subjected to these laws of corruption because it is founded on the redeeming blood of the crucified Righteous One, Christ.

This very event, the universal celebration is held by our Orthodox Church, in the Most Blessed and Ever-Virgin Mary the Mother of God. Our Church celebrates the Nativity of Theotokos, namely the reproach of death and corruption on the one hand; and the divine gift of eternal life in Christ on the other, as very clearly the hymn writer says; “Thy Nativity, O Theotokos, hath proclaimed joy to the whole world; for from thee hath dawned the Sun of Righteousness, Christ our God, annulling the curse and bestowing the blessing, abolishing death and granting us life everlasting”.

Many happy and peaceful returns!”