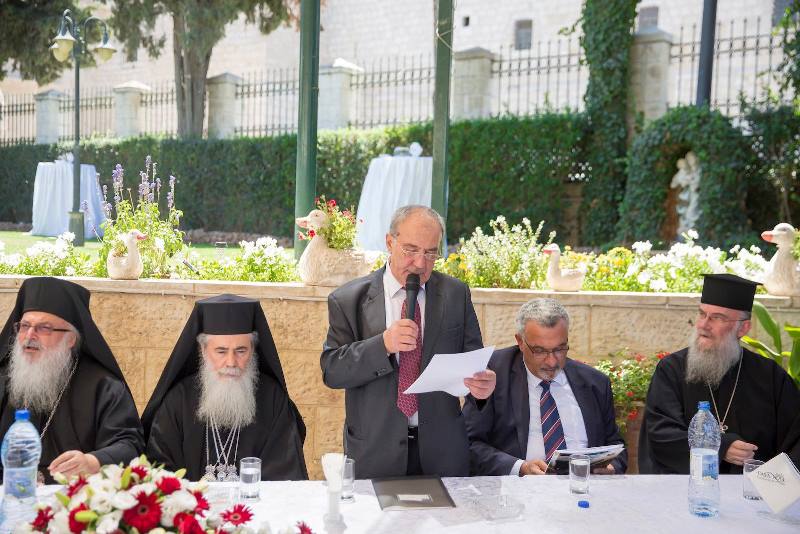 HIS BEATITUDE THE PATRIARCH OF JERUSALEM CELEBRATES THE D. LITURGY AT THE BASILICA OF THE NATIVITY IN BETHLEHEM

On Sunday, July 30/ August 11, 2019, His Beatitude our Father and Patriarch of Jerusalem Theophilos officiated the Divine Liturgy at the Basilica of the Nativity in Bethlehem, above the God-receiving Cave, where our Lord Jesus Christ was born in the flesh.

This Divine Liturgy was celebrated on the centenary completion since the foundation of Jamaeye, namely the Greek-Orthodox community in Bethlehem, whose parish Church is the Basilica.

Co-celebrants to His Beatitude were the Most Reverend Archbishop Aristarchos of Constantina, the Most Reverend Archbishop Theophylactos of Jordan, the Most Reverend Metropolitan Joachim of Helenoupolis, Hagiotaphite Hieromonks, the Hegoumen of Beit Sahour and Beit Jala Archimandrite Ignatios and Dragouman Archimandrite Mattheos, the Priests of the Basilica Fr. Spyridon, Fr. George and Fr. Issa, Archdeacon Mark and other Deacons. The chanting was delivered by Mr. Yakub in Greek on the right and by Mr. Samih in Arabic on the left, along with the Community choir under Mr. Lawrence Samour, as the service was attended by the Greek Orthodox flock of Bethlehem.

Before the Holy Communion His Beatitude preached the Divine Word as follows;

“Now I beseech you, brethren, by the name of our Lord Jesus Christ, that ye all speak the same thing, and that there be no divisions among you; but that ye be perfectly joined together in the same mind and in the same judgment” (1 Cor. 1:10) St. Paul advices.

Beloved Brothers and Sisters and Christ,

The grace of the God-receiving Cave of the incarnation of God the Word our Lord Jesus Christ  who was born through the pure blood of our Most Blessed Lady Theotokos and Ever-Virgin Mary, has gathered us all in this most sacred universal shrine of the Biblical town of Bethlehem, in order to celebrate the Divine Liturgy, namely the great sacrament of the Divine Eucharist, the sacrament in the blood and body of Christ, of our communion and love, as well as the Christian Rum-Orthodox witness in Palestine throughout the centuries.

And this witness is no other than the witness of the Holy Apostle and Evangelist John, according to whom “In the beginning was the Word, and the Word was with God, and the Word was God” (John 1:1). “And the Word was made flesh, and dwelt among us, (and we beheld his glory, the glory as of the only begotten of the Father,) full of grace and truth” (John 1:14).

It is precisely this witness of the love of God the Word that the established Biblical Church of Jerusalem evangelizes, the Church for which St. John Damascene exclaims; “Rejoice Holy Zion, Mother of Churches, and God’s dwelling place”. This witness is proclaimed also both in words and in action by the primary monastic order of the Hagiotaphite Brotherhood with its Christian flock, which has been tested by the worldly powers of darkness of this era (Eph. 1:16), which powers of darkness, namely “your adversary the devil, as a roaring lion, walketh about, seeking whom he may devour” (1 Peter 5:8) according to Apostle Peter. This means that the Christians’ persecutors and accusers were inspired and moved by Satan, whose purpose is the disorder (1 Cor. 14:33) which opposes the peace in Christ and the unity of the Church.

And for Christ, “who is the head of the body, the church” (Col. 1:18), God the Father was pleased to agree and reconcile everything to Himself. “And, having made peace through the blood of his cross, by him to reconcile all things unto himself; by him, whether they be things in earth [the people on earth with God and with one another], or things in heaven [the angels]” St. Paul preaches (Col. 1:19-20).

In other words, Christ came in the world to unite everything. He suffered death on the Cross and was resurrected from the dead that “he should gather together in one the children of God that were scattered abroad” (John 11:52). After all, this is the content of Christ’s fervent prayer a little while before his passion on the Cross, that His disciples may remain united by the Holy Spirit in the bond of love, unity and peace. “Neither pray I for these alone, but for them also which shall believe on me through their word; That they all may be one” (John 17:20-21).

Those who bear the Name of Christ, the members of the Church, who bear the seal of the gift of the Holy Spirit, should be distinguished for their unity in one manner of thought, and in one mind, as St. Paul advices by saying; “Now I beseech you, brethren, by the name of our Lord Jesus Christ, that ye all speak the same thing, and that there be no divisions among you; but that ye be perfectly joined together in the same mind and in the same judgment” (1 Cor. 1:10).

We Christians, my dear brothers and sisters, should not be satisfied only in a dry and intellectual faith, but we should try to prove it in practice, as Prophet Isaiah preaches; “Wherefore the Lord said, Forasmuch as this people draw near me with their mouth, and with their lips do honour me, but have removed their heart far from me” (Isaiah 29:13).

The great Apostle of the nations Paul, anxious as a spiritual father for the spiritual state in Christ of the Christians, says encouragingly; “ I beseech you therefore, brethren, by the mercies of God… be not conformed to this world: but be ye transformed by the renewing of your mind, that ye may prove what is that good, and acceptable, and perfect, will of God” (Romans 12:1-2).

Paul’s word: “be not conformed to this world” refers to the manner of living of those people who were not reborn through Christ. It refers to the fallen and corrupt nature of the people who follow this transitory world, as St. John the Evangelist teaches by saying: “And the world passeth away, and the lust thereof: but he that doeth the will of God abideth forever” (1 John 2:17).

We, my dear brothers and sisters, who have the ark of salvation, namely the Church, the mystical body of Christ “In whom are hid all the treasures of wisdom and knowledge” (Col. 2:3), are called to be worthy of God’s gifts; “For of him, and through him, and to him, are all things: to whom be glory forever. Amen” (Romans 11:36). Many happy returns!”

After the dismissal of the Divine Liturgy, the Most Reverend Archbishop Theophylactos of Jordan, who is the Patriarchal Representative and renovator of the shrine, currently working on the preservation of the wooden ikonostasion with the “Artis” team, offered a reception at the hegoumeneion.

Finally, the Community under its President Mr. Fretz offered the Patriarchal Entourage and others a meal at the “Casa Nova” Hotel which is next to the Basilica.