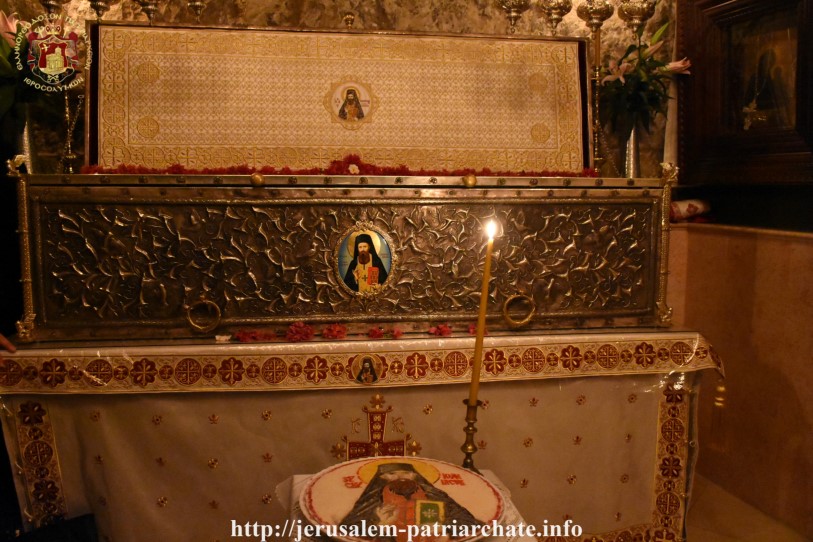 THE FEAST OF ST. JOHN THE NEW HOZEVITE AT THE PATRIARCHATE

On Saturday, July 28/ August 10, 2019, the Patriarchate celebrated the commemoration of our Holy Father John the New Hozevite from Romania at the Holy Monastery of his ascetic life, the ancient Monastery of Hozeva, which is located by the bank of brook Chorath, near Jericho.

On this day, primarily the Church of Jerusalem, but also the Church of Romania commemorate Saint John the New Hozevite, who came in the Holy Land from Romania in mid- 20th century and lived an ascetic life in Holy Monasteries of the river Jordan district and in that of Saints George and John the Hozevites. Due to his marvelous signs he was canonized a Saint by the Patriarchate of Jerusalem in 2016.

The feast of the Dormition of Saint John was celebrated with an all-night Vigil, officiated by H.H.B. our Father and Patriarch of Jerusalem Theophilos, who was welcomed by the Hegoumen Fr. Constantine with the following words;

With Your Reverend Entourage,

In our time people have lost hope to a great extent; the Saint we celebrate today wrote about hope in November 1952:

“Hope is being born simultaneously with the man’s soul and it is the pillar of life. If the virtue of hope had not existed, nor faith, neither love would remain within the soul, and therefore life itself would be lost. This is the wondrous power of the soul which elevates those who have been hurt – the bright ray of light that leads to the truth. In short, we can say that the person who has unshakable hope within him can never be defeated by the storms and the hardships of life”.

Our Hagiotaphite Brotherhood, and first among all Your Beatitude, marches – through difficulties, temptations and sorrows – in this present life, based precisely on this hope the daughter of patience according to Saint Paul (Romans 5:4). Having as an anchor of Hole the Faith in the Trinitarian God and His Saints, one of whom is Saint John the New Hozevite who we honour today.

After the welcoming speech, according to the typikon order, the Vigil started with the Compline, Salutations of the Saint and Vespers, followed by the Divine Liturgy. Co-celebrants to His Beatitude were the Most Reverend Archbishop Aristarchos of Constantina and the Most Reverend Metropolitan Joachim of Helenoupolis, Hagiotaphite Hieromonks, Priests from the Romanian Patriarchate, and Archdeacon Mark. The chanting was delivered by the Byzantine singers Leonidas Doukas, Christos Stavrou, Gregorios Zarkou and Dionysios Thanasoulis, as the Vigil was attended by a Congregation of Monks, Nuns, and laity who came from the world for the elevation of their souls and prayed in deep contrition.

Before the Holy Communion His Beatitude read the following Sermon;

“Lord, I have loved the habitation of thy house, and the place where thine honour dwelleth” (Psalm 26:8) the Prophet-King David sings.

Let us rejoice in the Lord, for by the grace of the Holy Spirit we are gathered today in this sanctified and sacred place, the Monastery of Hozeva, in order to celebrate the sacred commemoration of our Father among the Saints John the New Hozevite from Romania.

“Blessed is the man that endureth temptation: for when he is tried, he shall receive the crown of life, which the Lord hath promised to them that love him” (James 1:12) St. James the Brother of God says. Blessed is the one who willingly endures temptation, because he will become experienced and cleansed just like the pure gold, he will receive the crown of life and become the dwelling place of Christ, the heavenly King. The God-man Christ will come therein with his grace and make His abode with him (John 14:23), just as He truly says, according to our Father John.

Indeed, my dear brothers and sisters, our Father John, who loved this ascetic place of Hozeva, was tested and found worthy of the crown of eternal life as the Holy Bible proclaims; “But the souls of the righteous are in the hand of God…like gold in the furnace he tried them, and like a sacrificial burnt offering he accepted them” (Wisdom of Solomon 3:1-6). And in more detail, God accepts the many hardships of the tested faithful like a sweet fragrance, just like the “sacrificial burnt offering” (Wisdom of Solomon 3:6), namely the burnt offerings of the sacrifices that are being completely burnt in the altar.

And hearkening to the God-inspired words of the psalmist: “When thou saidst, Seek ye my face; my heart said unto thee, Thy face, Lord, will I seek” (Psalm 27:8), the Holy Righteous John managed to form Christ within him through his ascetic striving and unceasing prayer, according to St. Paul’s advice; “My little children, of whom I travail in birth again until Christ be formed in you” (Gal. 4:9). Interpreting these words, St. Cyril of Alexandria says; “until the great and extremely intelligent character of Christ is gradually doubled in our minds”.

The incorrupt and fragrant complete relic of our righteous and God-bearer Father John that lies before us, is an irrefutable and tangible and visible witness and proof that Christ is the light and the truth of the world. “I am the light of the world: he that followeth me shall not walk in darkness, but shall have the light of life” (John 8:12) says the Lord.

This true light of life is being announced and preached by our Holy Orthodox Church through its saints amidst the generation of the distorted and perverted people of our time.

And we say this because the righteous, namely the saints of God, are shown as luminaries in the world on the one hand (Philip. 2:15) and on the other, they “shall shine forth as the sun in the kingdom of their Father” (Matthew 13:43). Moreover, the Saints will sit upon twelve thrones and judge the twelve tribes of Israel according to Evangelist Matthew; “And Jesus said unto them, Verily I say unto you, That ye which have followed me, in the regeneration when the Son of man shall sit in the throne of his glory, ye also shall sit upon twelve thrones, judging the twelve tribes of Israel” (Matthew 19:28).

The incorrupt and fragrant holy relic of our righteous Father John foretells and announces the “rebirth”, namely the resurrection from the dead on Judgement Day. For this St. John advices all those who follow our Lord Jesus Christ through St. Paul’s mouth, to “cleanse ourselves from all filthiness of the flesh and spirit, perfecting holiness in the fear of God” (2 Cor. 7:1). “that we may have boldness in the day of judgment” (1 John 4:17), as St. John the Evangelist preaches.

Rendering glory and thanksgiving to the Holy Trinitarian God, for “He is wondrous in His saint” (Psalm 67:36) our Father John, let us entreat him so that along with the Most Blessed Theotokos and Ever-Virgin Mary, may intercede for the salvation of our souls. And let us say along with the hymn writer; “As we the faithful delight today, on thy memory, our righteous Father John, we glorify Him that made thee glorious, Christ our Lord, the supremely good. Beseech Him ceaselessly, O all-venerable, that we attain to the splendour of the Saints, and to everlasting glory since thou hast boldness to speak freely unto Him at any time.” Amen. Many happy returns!”

After the Divine Liturgy the reorganizer and Hegoumen of the Holy Monastery Fr. Constantinos offered a meal.