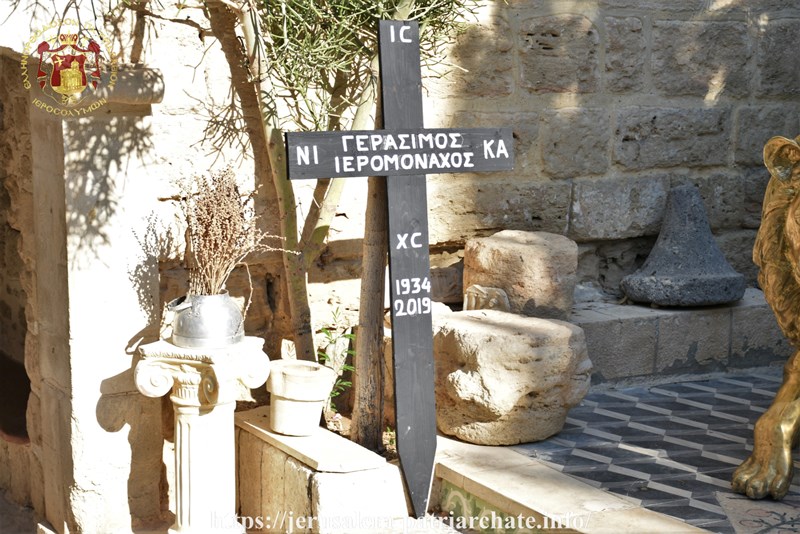 DEPARTURE FROM LIFE OF GERASIMOS THE HAGIOTAPHITE

The Hegoumen of the Holy Monastery of Sarantarion Mount Archimandrite Gerasimos Selalmatzidis died on Tuesday morning, July 17/30, 2019, at the Holy Monastery of St. Gerasimos of the Jordan, where he was especially treated for his old age in the last few months, by the care of the Patriarchate and the diligence of the Hegoumen Archimandrite Chrysostom.

The deceased, genuine Hagiotaphite, joined the Hagiotaphite Brotherhood as an adult, and having received the monastic schema and the office of Priesthood, he ministered in various posts of the Patriarchate and served as the Hegoumen of the Sarantarion Mount for many years. Living in the mountains and frugal in his diet, he offered the pilgrims’ financial contributions and his own property for the full renovation of the Monastery of the Sarantarion Mount and of that of St. John the Baptist in the river Jordan.

His funeral service, in the afternoon of his departure day, was officiated by H.H.B. our Father and Patriarch of Jerusalem Theophilos, with the participation of Hagiotaphite Archbishops, Monks and laity. The requiem was read by Geronda Secretary-General Most Reverend Archbishop Aristarchos of Constantina as follows;

The departure from life of our beloved Brother in Christ Archimandrite Gerasimos, Hegoumen of the Holy Monastery of Sarantarion Mount, reminded us St. Paul words; “For here have we no continuing city, but we seek one to come” (Hebrews 13:14). And “ourselves and one another and all our lives” should be aligned and directed to the final coming of the Kingdom of Heaven which has been granted to us through Jesus Christ, Who became Incarnate, was Crucified and Resurrected. Through His Cross and Resurrection death has no longer dominion over us. This salvific and hopeful message in Christ drew the soul of the deceased, our Brother Archimandrite Gerasimos.

He came to the Holy Land in an adult age from his hometown Thessalonica, and joined the Patriarchate of Jerusalem and the Hagiotaphite Brotherhood, he received the Priesthood, served the Department of Finance with financial transparency, and having been a mountain climber, he was called by our Lord Jesus Christ to minister at Sarantarion Mount in harsh conditions, where the Lord was tempted and conquered all temptations, comforting us and giving us courage to conquer our temptations. He served there for many years, and being frugal, he offered all the financial contributions he received from the pilgrims for the full renovation of the Holy Monastery of Sarantarion Mount and the restoration of the Holy Monastery of St. John the Baptist by the river Jordan. We entreat the Lord that He may consider these good works and forgive him for any sins he may have committed as human, and place him in the land of the living, along with the righteous ones, filling him with the His Trinitarian Light.

The Hagiotaphite Brotherhood thanks those who honored his memory for their participation at his funeral and the Hegoumen of the Holy Monastery of St. Gerasimos, Archimandrite Chrysostom, because of the care he offered the deceased with devotion, over the last few months of his life.

May his memory be ever-lasting!”

The Hagiotaphite Brotherhood expresses its condolences to his relatives in the world.

May his memory be ever-lasting!