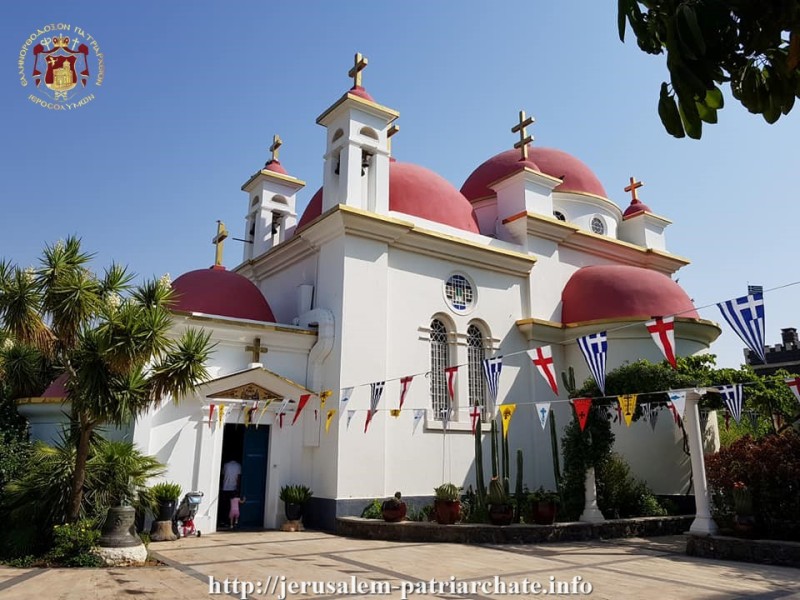 THE FEAST OF THE HOLY, GLORIOUS, ALL-LAUDED AND CHIEFS OF THE APOSTLES PETER AND PAUL

On Friday June 2/July 12, 2019, the Patriarchate celebrated the commemoration of the Holy, Glorious, All-lauded and Chiefs of the Apostles Peter and Paul at the Monastery dedicated to their names, in ancient Capernaum, at the north-west side of the sea of Tiberias.

With this feast the Church especially commemorates the contribution of the two great Apostles, Peter who denied the Lord, but then repented and cried bitterly and preached Christ in parts of Judea, Antioch and Asia Minor, and Paul, former Saul, a renown persecutor of the Christians, who was called by the Lord on his way to Damascus and preached Him in the nations of Asia and Europe, in the West and in the East, and intercedes for them.

In honour of these two Apostles, the Divine Liturgy was celebrated at their Church which was built by the Patriarch of Jerusalem Damian around 1930. The Liturgy was officiated by the Most Reverend Metropolitan Kyriakos of Nazareth, with co-celebrants Hagiotaphite Hieromonks from the neighbouring Monasteries of Capernaum. The chanting was delivered by the Archimandrites Hilarion and Chrysostom on the right in Greek and by a Byzantine music singer from Cana on the left in Arabic, and the Service was attended by a congregation of pilgrims, Arab-speaking Orthodox Christians from the Galilee district, who prayed in contrition and partook of the Holy Communion.

After the Divine Liturgy, the gook keeper of the Monastery Monk Eirinarhos offered a reception at the Hegoumeneion which was followed by a lunch meal with fish as the main course at the outside courtyard of the Monastery.