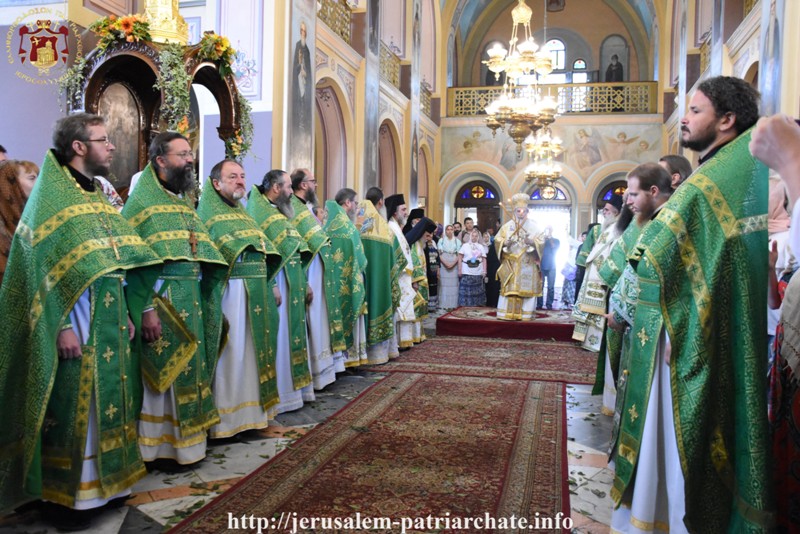 On Monday June 4/17, 2019, the feast of the Monday of the Holy Spirit was celebrated at the Russian MISSIA and its Church of the Holy Trinity, as a feast of a special honour and worship of the Holy Spirit, Who inspired and enlightened the Holy Apostles in the form of tongues of fire.

The Divine Liturgy was officiated by H.H.B. our Father and Patriarch of Jerusalem Theophilos, with co-celebrants the Most Reverend Archbishops; Aristarchos of Constantina, Theodosios of Sebastia, the Most Reverend Metropolitan Joachim of Helenoupolis, the Head of the Russian Spiritual Mission (MISSIA) Archimandrite Alexander, Archimandrite Athanasios, Archimandrite Dometian and other Priests of the Moscow Patriarchate, Hagiotaphite Hieromonks, Archdeacon Mark and other Deacons, at the chanting of the Monastery of the Russian Nunnery of Oreini choir, with the attendance of a noble Russian congregation.

“Let us faithful celebrate this fair post-festal time with joy and the final festival this is the day of Pentecost, which now fulfilleth the promise and time appointed. For on this day, the fire of the Good Comforter straightway came on earth, like unto tongues in form and it enlightened the disciples and made them Heaven’s initiates. Behold, the Comforter’s light hath come down and enlightened the whole world” the hymn writer of the Church proclaims.

Reverend Archimandrite Alexander, representative of H.H.B. the Patriarch of Moscow and All Russia Cyril in Jerusalem,

The grace of the All-holy and Life-giving Spirit has gathered all of us today in this Holy Church of the Holy Trinity, which belongs to the Spiritual Mission (MISSIA) of our brotherly Russian Church in Jerusalem, in order to co-celebrate in Eucharist the “fair post-festal time and the final festival” as the hymn writer says.

The feast of Pentecost is called “final” because it refers to the rebirth and renewal of us humans, as St. Paul preaches by saying; “But after that the kindness and love of God our Saviour toward man appeared… he saved us, by the washing of regeneration, and renewing of the Holy Ghost; Which he shed on us abundantly through Jesus Christ our Saviour” (Titus 3:4-6).

And the shedding of the Holy Spirit on us is no other than the completion of the time of the sending of the promised Holy Spirit to the Apostles, by our Lord Jesus Christ on the day of Pentecost, “at the upper room, where all the Apostles were gathered in one accord along with Mary the Mother of Jesus” (Acts 1:13-14).

Apostle Peter’s testimony at the Acts of the Apostles says; “This Jesus hath God raised up, whereof we all are witnesses. Therefore being by the right hand of God exalted, and having received of the Father the promise of the Holy Ghost, he hath shed forth this, which ye now see and hear” (Acts 2:32-33).

This shedding forth of the Holy Spirit was foretold by the Holy Prophets Joel and Ezekiel, who said respectively: “And it shall come to pass afterward, that I will pour out my spirit upon all flesh” (Joel 2:28) “A new heart also will I give you, and a new spirit will I put within you” (Ezekiel 36:26). And this new spirit was given to us, according to St. Paul, by the High Priest, namely our Lord Jesus Christ, who is settled in the house of God, namely in the Church of the faithful. “And having an high priest over the house of God; Let us draw near…, having our hearts sprinkled from an evil conscience, and our bodies washed with pure water. Let us hold fast the profession of our faith without wavering; for he is faithful that promised” (Hebrews 10:21-23).

In other words, Holy Pentecost is the time during which the Holy Spirit established the Apostles members of the resurrected from the dead body of Christ, by the providence of the Father and the cooperation of the Son. We, by the power and the working of the Holy Spirit have put on Christ through the holy Baptism, as St. Paul teaches; “For as many of you as have been baptized into Christ have put on Christ” (Gal. 3:27), and again he says; “For by one Spirit are we all baptized into one body, whether we be Jews or Gentiles, whether we be bond or free; and have been all made to drink into one Spirit” (1 Cor. 12:13).

On Pentecost day, the Church that is in the spirit becomes body of Christ and the Holy Apostles members of the Body of Christ. As the sacred hymn writer says; “The Holy Spirit perfecteth the priesthood; He hath taught wisdom to the illiterate. He hath shown forth the fishermen as theologians. He holdeth together the whole institution of the Church.”

The Holy Spirit is the Comforter, the Spirit of Truth, the One that Christ spoke about a little while before His Passion on the Cross; “If ye love me, keep my commandments. And I will pray the Father, and he shall give you another Comforter, that he may abide with you forever; Even the Spirit of truth; whom the world cannot receive, because it seeth him not, neither knoweth him: but ye know him; for He dwelleth with you, and shall be in you” (John 14:15-17).

Interpreting these words, St. Bazil says; “The Lord clearly distinguishes the diversity of the persons. If I go, He says, I will pray the Father and He shall give you a Comforter. Therefore, the Son is the one who entreats, the Father is being entreated, and the Comforter is the One who is being sent”.

According to St. Cyril of Alexandria, the Comforter is “the Spirit of the Truth of the Son”. This Comforter is the power and the teacher of the Church, as well as our protector, as St. Cyril of Jerusalem says; “We have a great ally and protector by God, a great teacher of the Church a great defender for us…And [the Holy Spirit] is called Comforter because it prays and comforts and deeply understands and feels our infirmities” (Catech. 16:20).

The deeper meaning of the “final” feast of Pentecost and the “post-festal” one, namely today’s feast of the Holy Spirit, is clearly expressed by the hymn writer by saying; “Of old the tongues were confounded because of the audacity in the building of the tower, but now the tongues are made wise for the sake of the glory of Divine knowledge. There, God condemned the impious because of their offence; and here, Christ hath enlightened the fishermen by the Spirit. At that time the confusion of tongues was wrought for punishment, but now the concord of tongues hath been inaugurated for the salvation of our souls”.

Precisely this inauguration in Christ for the salvation of our souls, as well as the unity of our faith and the communion of the Holy Spirit, who enlightened the Apostles, through whom we have received the glory of the knowledge of God, have we come to demonstrate through the Sacrament of the Holy Eucharist in the Holy City, the City of Jerusalem, we, the brotherly Churches, namely the Church of Jerusalem (Sion) which has been founded on the blood on the Cross of our Saviour Christ, and the Orthodox Russian Church which has been watered by the blood of its new martyrs.

Let us entreat the Comforter Who has been sent to the Saints, to dwell in our hearts and along with the hymn writer let us say; “Draw nigh unto us, draw nigh, O Thou Who art everywhere present, and even as Thou art ever with Thine Apostles, so do Thou also unite to Thyself us who long for Thee, O Compassionate One, that, being united with Thee, we may praise and glorify Thine All-holy Spirit”. Amen. Many Happy Returns.”

Consequently His Beatitude stressed the importance of the inspiration of the Holy Spirit for the restoring and strengthening of the wounded unity of the Church and of the Orthodox peoples.