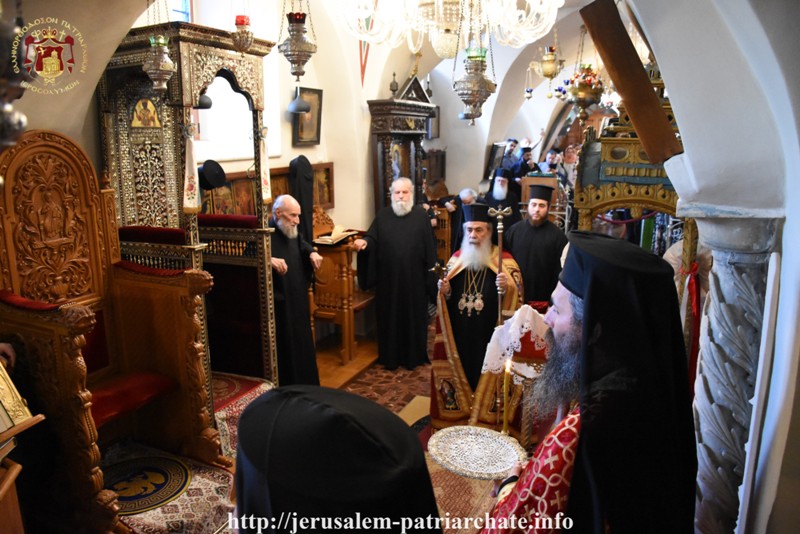 THE FEAST OF SAINTS CONSTANTINE AND HELEN AT THE PATRIARCHATE

On Monday May 21/ June 3, 2019, the Patriarchate and the Hagiotaphite Brotherhood celebrated the commemoration of the Holy Glorious Sovereigns and Equals to the Apostles Constantine and Helen.

Saints Constantine and Helen are celebrated by the Church as equals to the Apostles due the Mediolanon decree in 312 A.D., by Constantine the Great, which allowed the Christians to freely exercise their religious duties, it allowed the freedom to spread Christianity and construct churches. First among which was the Church of the Resurrection which was built by Saint Helen between the years 326-336 A.D. when she had visited the Holy Land.

The Hagiotaphite Brotherhood honours Saint Helen as its founder and for this reason the Monastic Church is dedicated to her and her son Saint Constantine.

In this Church, Vespers was held in the evening, led by H.H.B. our Father and Patriarch of Jerusalem Theophilos and the Divine Liturgy was celebrated in the morning, officiated by Him, with co-celebrants Hagiotaphite Hieromonks, with first in rank Archimandrite Alexios the Typikon Keeper, and ministering Priests of the Church. The chanting was delivered by the Choir Leader of the Church Archimandrite Eusevios on the right and the Choir Leader of the Church of the Resurrection Mr. Constantinos Spyropoulos on the left, with the participation in prayer of Hagiotaphite Archbishops and Priests, the Consul General of Greece in Jerusalem Mr. Christos Sophianopoulos and many faithful Christians.

In the evening after Vespers, there was a reception with the boiled wheat and dried bread, while in the morning there was the official return to the Patriarchate Headquarters, the distribution of small loaves of bread as a blessing, by the supervisor of the bakery Nun Seraphima, and finally the following address of His Beatitude;

“Rejoice, O great and all-wise Constantine, thou fount of Orthodox Faith, that dost water continually all the lands beneath the sun with thy sweet and delightful streams. Rejoice, O root from which there sprouted forth the fruit that nourisheth Christ’s most holy Church. Rejoice, thou most glorious boast and fame of all the farthest ends of earth, first of Christian kings. Rejoice, thou joy of the faithful men.”

Today the Holy Church of Christ and especially the Church of Jerusalem, mystically rejoicing on the holy commemoration of the Holy glorious, God-crown sovereigns and equal to the Apostles Constantine and Helen, has celebrated festively the sacrament of the Holy Eucharist at the Monastic Patriarchal Church bearing their name.

We keep the commemoration of these glorious equals to the Apostles Constantine and Helen, as we should, we, the primeval Monastic order of the Studious Ones, namely the Hagiotaphite Brotherhood, which was founded by St. Helen, as well as the Roum Orthodox Christian people.

Correctly and righteously the hymn writer of the Church salutes St. Constantine as “the fount of Orthodox faith that dost water continually all the lands beneath the sun with sweet and delightful streams”, namely Romiosyne, and especially the Holy Land, which has been watered and sanctified by the blood of righteousness of our God and Saviour Christ on the Cross.

And we say this, because for us who keep the feast of Saints Constantine and Helen, this is not a mere commemoration of a historic event, but rather a reminder of the divine mission of the Church of Jerusalem, which has been ministering the All-holy Shrines throughout the centuries, and has been witnessing the light of truth, the light of the crucified and resurrected Christ. And this light is no other than the light of the faith of the noble sovereigns of Romiosyne, Constantine and his mother Helen, as the hymn writer of the church expresses very clearly; “Not from man did great Constantine with his blest mother Helen receive the royal sovereignty, but by God’s grace from Heaven. For he beheld the divine Cross as a bright flashing trophy. With it was he victorious over all who opposed him, and he destroyed the deceit and error of all the idols, while making strong throughout the world Orthodox faith and practice.”

Let us pray to the Only Heavenly King, so that through the intercessions of our Lady the Most Blessed Theotokos and Ever-Virgin Mary and those of His Saints Constantine and Helen, we may be enlightened by the light and the power of the divine trophy, the Life-giving Cross, which has become a weapon for then against their opponents, and for us, boast and peace. “But God forbid that I should glory, save in the cross of our Lord Jesus Christ, by whom the world is crucified unto me, and I unto the world” (Gal. 6:14), St. Paul preaches. Amen. Many Happy returns! Christ is risen!”

Finally there was a festal monastic meal at the refectory of the Patriarchate.