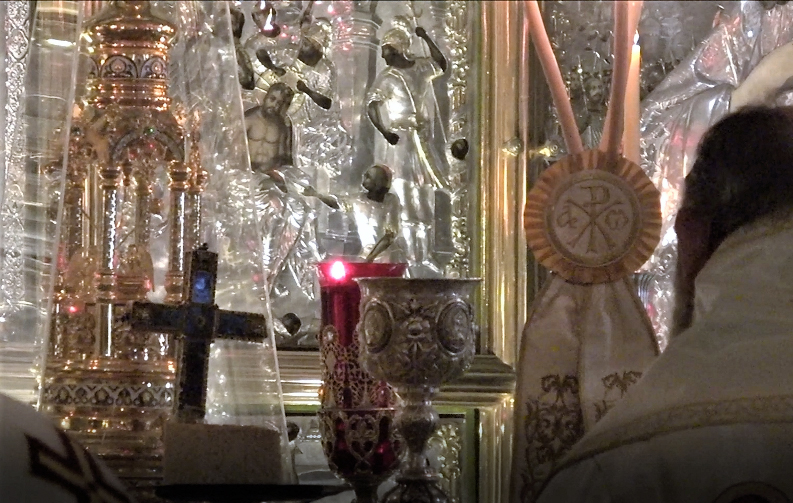 On Monday morning, May 7/20, 2019, the commemoration of the appearance of the sign of the Precious Cross in the Heavens was celebrated with the Divine Liturgy in Golgotha, led by the Most Reverend Metropolitan Joachim of Helenoupolis.

Regarding this wondrous event, St. Cyril of Alexandria, Archbishop of Jerusalem has delivered the witness to the Church, according to which, during the 3rd hour, which is 9 in the morning, on 7th May 351 A.D. the Cross appeared in heavens like a star, shining more than the sun rays and was visible from Golgotha to the Mount of Olives. A large crowd of people witnessed this at the time, praising and glorifying Christ, who was crucified on the Cross for our salvation.

After the Dismissal of the Divine Liturgy, the congregation came down from Golgotha and a procession began from the Deposition slate to conclude after three rounds about the Holy Sepulchre, with a large participation of the Hagiotaphite Brotherhood.

After the procession the officiating Metropolitan read the Gospel narrative of the Resurrection of the Lord and the aforementioned letter of St. Cyril.

At the end of the service the Episcopal entourage returned to the Patriarchate Headquarters and paid their respects to H.H.B. our Father and Patriarch of Jerusalem Theophilos.