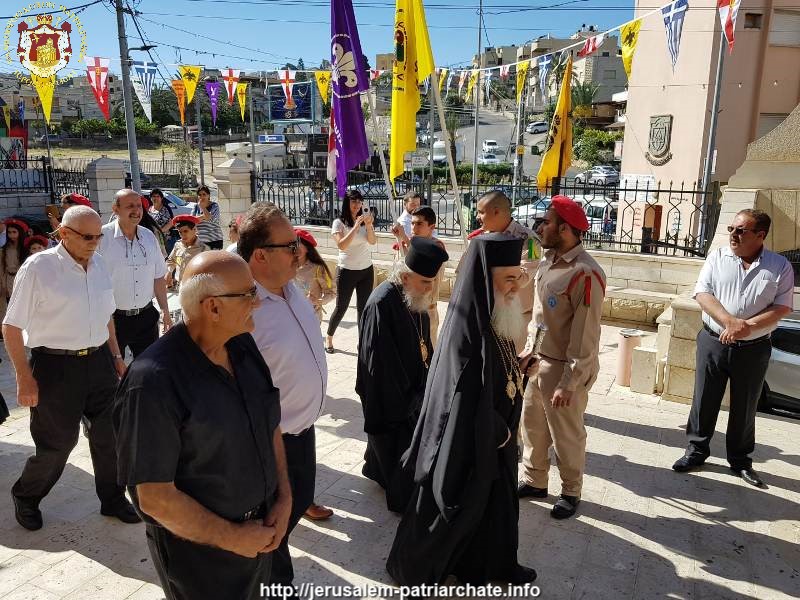 On the Sunday of the Paralytic man, May 6/19, 2019, His Beatitude our Father and Patriarch of Jerusalem Theophilos officiated the Divine Liturgy at the Holy Church of St. George the Great Martyr at the Greek-Orthodox Arab-speaking Community of Reine, Nazareth’s suburb.

Co-celebrants to His Beatitude were the Most Reverend Metropolitan Kyriakos of Nazareth, the Most Reverend Archbishop Aristarchos of Constantina, the Hagiotaphite Archimandrite Kallistos, the Dean Priest of this parish Fr. Simeon and other Arab-speaking Priests, and Archdeacon Mark, while the hymns were delivered by the parish choir and the service was attended by a large crowd of faithful Christians.

“At the Sheep’s Pool, a man lay in sickness; and when he saw Thee, O Lord, he cried: I have no man, that when the water is troubled, he might put me therein. But when I go, another anticipateth me and receiveth the healing, and I lie yet in mine infirmity. And straightway, taking compassion on him, the Saviour saith unto him: for thee I became man, for thee I am clothed in flesh, and sayest thou: I have no man? Take up thy bed and walk” the hymn writer of the Church proclaims.

Christ who is risen from the dead, the first-fruits of those who have slept, and the first-born of all creation, and the Creator of all things, has gathered us in this holy Church of your town Reine, in order to celebrate the day of Pascha and the Lord’s miracle of the healing of the paralytic man at the Sheep’s pool in Jerusalem, as St. John the Evangelist says: “and Jesus went up to Jerusalem. Now there is at Jerusalem by the sheep market a pool, which is called in the Hebrew tongue Bethesda, having five porches.  And a certain man was there, which had an infirmity thirty and eight years. When Jesus saw him lie, and knew that he had been now a long time in that case, he saith unto him, Wilt thou be made whole? The impotent man answered him, Sir, I have no man, when the water is troubled, to put me into the pool. Jesus saith unto him, Rise, take up thy bed, and walk” (John 5, 1-2, 5-8).

Interpreting Jesus command to the paralytic man “take up thy bed, and walk”, St. Cyril of Alexandria says: “The command was in a Godly manner, having the proof of a power and authority above human power. For He is not praying for the healing of the infirmity of the sick man, so that He may not be seen to some as one of the holy prophets, but as the Lord of powers, in all authority, He commands that the miracle be done”.

In other words, through the sign of the miracle, or the healing of the paralytic man, Jesus reveals His divine glory on the one hand, and on the other, He proves that He is the Son and Word of God, and also the Saviour of the people, namely, the healer of our souls and bodies. Moreover, He proves that “his word was with power” (Luke 4:32). This power of Jesus was ascertained by the astonished people, when Christ commanded the impure spirits to leave the possessed woman, as Luke the Evangelist says: “And they were all amazed, and spake among themselves, saying, What a word is this! for with authority and power he commandeth the unclean spirits, and they come out” (Luke 4:36).

Christ proved this divine power most profoundly by His three-day resurrection, as the hymn writer of the church festively says: “Let the heavens rejoice! Let the earth be glad! For the Lord has shown strength with His arm! He has trampled down death by death! He has become the first born of the dead! He has delivered us from the depths of hell, and has granted to the world great mercy”.

It is made clear, my dear ones, that through His resurrection from the dead, Christ has revealed Himself to be the sovereign Lord and conqueror of the death of corruption and sin, and the deliverer of the humankind from the voraciousness of hades. For this reason the hymn writer is not restricted in the narration of the miraculous healing of the paralytic man, but prays to the healer and our Savior Jesus Christ for the healing of our paralytic soul, by saying: “As of old Thou didst raise up the paralytic, O Lord God, by Thy Godlike care and might, raise up my soul which is palsied by diverse sins and transgressions and by unseemly deeds and acts, that, being saved, I may also cry out: O Compassionate Redeemer, O Christ God, glory to Thy dominion and might”.

It is a fact that palsy, namely the illness of the soul, is owed to our sins and distance from the Law of God, but also from the sanatorium, His Church. The illness of the soul is the result of the bondage in the various passions of the soul, which exert a frivolous effect on the soul. For this reason Jesus says to the paralytic man: “Behold, thou art made whole: sin no more, lest a worse thing come unto thee” (John 5:14). And according to St. Paul, sin is the sting of death; “The sting of death is sin” (1 Cor. 15:56).

The healing of the palsied soul is only accomplished through the divine grace and the mercy of God. “Not by works of righteousness which we have done, but according to his mercy he saved us, by the washing of regeneration, and renewing of the Holy Ghost” (Titus 3:5). Behold why the hymn writer, as a representative of each one of us, expresses the fervent intercession to the Lord, so that by His divine stewardship, He may raise us, just like the paralytic man of old, from whichever sins and illegal actions we have made, and as the most merciful and almighty God grant us the healing of our souls, namely the salvation of our souls.

Christ’s question to the paralytic man of today’s gospel narrative “wilt thou be made whole?” (John 5:6) is directed to all of us. And the paralytic may have righteously answered by saying: “Sir, I have no man” (John 5:7); he said that because he did not know the Saviour of the world. However, we, my dear ones, have no right to say that we have no man, “when the water is troubled, to put us into the pool” (John 5:7).

And we say this, because the incarnate through Virgin Mary God the Word and our Lord Jesus Christ is the perfect man, the most merciful and friend of man, while His Church, His mystical body, is the spiritual as well as the physical pool, whose water is no other than the Holy Spirit of God the Father “Which he shed on us abundantly through Jesus Christ our Saviour” (Titus 3:6). And Prophet Joel says: “And it shall come to pass in those days,” – meaning the incarnation of Christ, God the Word – “saith God, I will pour out of my Spirit upon all flesh…  And it shall come to pass, that whosoever shall call on the name of the Lord shall be saved” (Acts 2: 17, 21).

In other words, my dear ones, we have a man, and moreover, a man who is a doctor and a healer, who heals every kind of infirmity, both of the soul and the body, as Matthew the Evangelist says: “And Jesus went about all the cities and villages, teaching in their synagogues, and preaching the gospel of the kingdom, and healing every sickness and every disease among the people” (Matt. 9:35). Furthermore, our Lord Jesus Christ Himself, who was resurrected from the dead, advices us; “Ask, and it shall be given you; seek, and ye shall find; knock, and it shall be opened unto you: For every one that asketh receiveth; and he that seeketh findeth; and to him that knocketh it shall be opened” (Matt. 7:7-8).

Afterward His Beatitude offered an icon of the Theotokos to be kept in the Church.

The Divine Liturgy was followed by a reception at the reception hall of the parish, where the Dance club of Cana of Galilee, which has been founded by the Hegoumen of Cana Archimandrite Chrysostom, danced traditional dances.

At noon, a meal was offered at the reception hall of the parish by the Community Council, were His Beatitude addressed all present as follows;

“Who his own self bare our sins in his own body on the tree, that we, being dead to sins, should live unto righteousness: by whose stripes ye were healed” (1 Peter 2:24).

Today our Holy Church commemorates the healing of the paralytic man by our Lord Jesus Christ, at the Sheep’s pool, as St. John the Evangelist says (John 5:1-15).

The healing of the paralytic man, as well as of many other ill people by Christ during His earthly presence, confirms the fact that He Himself took upon Him our sins, namely our wounds and infirmities, and offered His body a sacrifice for them on the Cross. And He did this to liberate us from sins and enable us to live for righteousness and for virtue. Through His wounds you have been healed, St. Peter says.

It is precisely this healing that Christ granted to all humankind through His luminous Resurrection. The preaching of the Resurrection of the crucified and buried Christ is being ministered throughout the centuries by the Rum-Orthodox Church, through the safeguarding of the All-holy shrines on the one hand, which are the irrefutable witnesses of the Christian faith, and on the other, through the pastoral care of its Christian congregation in the Holy Land.

This sacred consignment, namely the precious treasure of the teaching of the Gospel of Christ are we called to preserve like the pupil of an eye, especially the Christians who inhabit the Holy Land and the wider region of the Middle East, hearkening to the council of the wise Apostle Paul to his disciple Timothy: “That good thing which was committed unto thee keep by the Holy Ghost which dwelleth in us” (2 Tim. 1:14). And St. Paul continues, urging his disciple, and all of us, not to imitate those who abandoned him and turned away from their Church. “This thou knowest, that all they which are in Asia be turned away from me; of whom are Phygellus and Hermogenes” (2 Titus 1:15).

We, my dear brothers and sisters, who “have been healed by the stripes of our God and Saviour Christ” (1 Peter 2:24), and through baptism partake of His death, Who has trampled down and conquered the death of corruption and sin, are once more called to hear the faithful word of our Lord Jesus Christ, Who said to the paralytic man: “Behold, thou art made whole: sin no more, lest a worse thing come unto thee” (John 5:14).

In other words, we are once more called not to imitate Phygellus and Hermogenes.

Christ is risen! Many happy returns!”