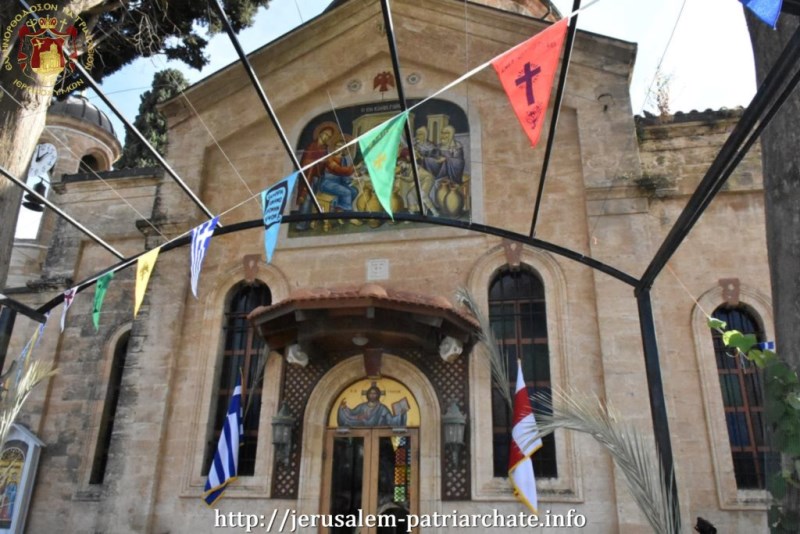 THE FEAST OF THE LORD’S MIRACLE IN KANA

On Thomas Sunday, April 22/ May 5, 2019, the Greek Orthodox Community of Kana in Galilee celebrated according to its order the commemoration of the Lord’s miracle of turning the water into wine that happened in the ancient small town of Kana for the pleasure of the wedding guests, a wedding that the Lord Himself blessed being there with His Mother as guests too.

His Beatitude addressed this congregation as follows;

“This beginning of miracles did Jesus in Kana of Galilee, and manifested forth his glory; and his disciples believed on him” (John 2:11) St. John the Evangelist says.

The uncreated and unwaning Light of the Resurrection of our Lord and Saviour has gathered all of us in this Holy place of Kana of Galilee, where the wedding to which the Mother of Jesus was present, and also “both Jesus was called, and his disciples, to the marriage” (John 2:2), in order to thank, glorify and bless the resurrected Christ unto the ages.

Two things happened with the participation of Christ at the wedding of his friend Simon of Kana, who was also called Zelotes (Luke 6:15); firstly, the sacrament of marriage took place and the woman was being set free from the curse of the Mosaic Law as St. Cyril of Alexandria preaches by saying: “the sacred marriage was sanctified and therefore the curse of the woman was lifted; for the children will not be born in sorrow any more, and this is so because the beginning of birth has been blessed by Christ”. Secondly, He turned the water into wine, as St. John the Evangelist witnesses by saying: “When the ruler of the feast had tasted the water that was made wine, and knew not whence it was: (but the servants which drew the water knew;)” (John 2:9).

In this wedding Jesus revealed His glory, namely His divinity, for the first time. Moreover, He revealed that the God the Word came down from heaven to earth, in order to receive upon Himself the human nature by the way of the Bridegroom, considering the humanity is called the bride and Christ the Bridegroom, according to St. Cyril of Alexandria.

In other words, the wedding in Kana is the exemplar of the spiritual wedding of Christ the Bridegroom with the Church-Bride, as St. John witnesses in his book of Revelation by saying: “Let us be glad and rejoice, and give honour to him: for the marriage of the Lamb is come, and his wife hath made herself ready.  And to her was granted that she should be arrayed in fine linen, clean and white: for the fine linen is the righteousness of saints. And he saith unto me, Write, Blessed are they which are called unto the marriage supper of the Lamb. And he saith unto me, These are the true sayings of God” (Rev. 19:7-9). And in more detail, let us be glad and rejoice, and let us attribute all the glory to Him, because the time of the wedding of the lamb has arrived, of the spiritual and eternal Bridegroom Jesus Christ, and His wife, the spiritual Bride, the Church, has made herself beautiful with ornaments. And she has been given a pure crimson garment by God, which symbolizes the royal grace and holiness. Because the garment in crimson colour are the virtues of the saints of the triumphant Church, of the new Jerusalem, the eternal Bride of Christ. And the Angel said to me; Write; blessed are those who have been invited to the dinner of the wedding of the Lamb, who will participate at the eternal joy and beatitude; These words which confirm the beatitude of the faithful through their union with Christ, are true, they are the words of God.

As far as the miracle of the turning of water into wine is concerned, this is not only the revelation of the glory of Jesus, but also the exemplar of the new drink in Christ which we are called to drink as the hymn writer says: “Come let us drink a new drink, not one marvellously brought forth from a barren rock, but the Source of incorruption, which springeth forth from the grave of Christ, in Whom we are established”.

We, my dear brothers and sisters, being named after the name of Christ, which is above all names, (Philip. 2:9), henceforth drink from the “new drink” which gushes out from the Life-giving Tomb of our Lord and Saviour Jesus Christ, Who is the unceasing spring, the spring of incorruption; a spring which offers us the rebirth of the resurrection of our Lord and Saviour Jesus Christ.

And we ask ourselves, what exactly is the “new drink”? It is the sacred and living blood of Christ, “which is shed for many for the remission of sins” (Matt. 26:28). It is our participation in the Eucharistic dinner of the Lord’s body and blood, in which we foretaste the eternal life and our resurrection. “Whoso eateth my flesh, and drinketh my blood, hath eternal life; and I will raise him up at the last day” (John 6:54) the Lord says. Interpreting these words, St. Cyril of Alexandria says: “marvel at approaching St. John the Evangelist who said: “and the Word became flesh” (John 1:14); not therefore that He became “in flesh”, but that He became “flesh” in order to declare the union. And each of the two remains as it is in nature, one of the two is Christ, and the Word is united with the same flesh in a manner unspeakable and beyond human comprehension”.

Jesus, my dear ones, and His glorious resurrection, are the foundation of the Christian faith as St. Paul preaches by saying: “For other foundation can no man lay than that is laid, which is Jesus Christ” (1 Cor. 3:11). And elsewhere he says: “And if Christ be not risen, then is our preaching vain, and your faith is also vain” (1 Cor. 15:14).

Moreover, Apostle Thomas the Twin confirms through his faithful unfaithfulness the resurrection of Christ as St. John the Evangelist says: “Then saith he to Thomas, Reach hither thy finger, and behold my hands; and reach hither thy hand, and thrust it into my side: and be not faithless, but believing. And Thomas answered and said unto him, My Lord and my God. Jesus saith unto him, Thomas, because thou hast seen me, thou hast believed: blessed are they that have not seen, and yet have believed” (John 20:27-29).

“A sacred Pascha hath been shown forth to us today; a new and holy Pascha, a mystic Pascha…a Pascha that hath opened unto us the gates of Paradise” the hymn writer of the Church proclaims. And this is because today is the second Sunday since Pascha, and we celebrate the inauguration of Christ’s resurrection.

And this inauguration refers to our liberated human nature in Christ through Christ, from the corruption of the death of sin, a human nature that has been deified in His resurrection and this way it is henceforth able to participate in the unwaning day of the Kingdom of the Lord. “But I say unto you, I will not drink henceforth of this fruit of the vine, until that day when I drink it new with you in my Father’s kingdom” (Matt. 26:29).

Let us entreat the Mother of our God and Saviour Christ, the Most blessed Theotokos and Ever-Virgin Mary, along with the bridegroom and Apostle Simon of Kana, to intercede for us to our Saviour Jesus Christ, the resurrected from the dead, to deem us worthy to participate at the Dinner of the Kingdom of Heaven.

Many Happy Returns! Christ is Risen!

After the Divine Liturgy there was a procession three times around the Church and the Gospel narrative of the miracle in the wedding of Kana.

After these, the teenagers of the parish danced traditional Palestinian dances at the courtyard of the Church and finally the hospitable Hegoumen Archimandrite Chrysostom offered a meal, during which His Beatitude addressed all present as follows;

“O great and most sacred Pascha, Christ; O wisdom and Word and Power of God! Grant that we partake of Thee fully in the unwaning day of Thy Kingdom” the hymn writer of the Church proclaims.

Today’s feast of the Wedding in Kana of Galilee is also a feast of the historic town of Kana, which is steadfastly joined with the spiritual jurisdiction of the Rum Orthodox Patriarchate of Jerusalem. Needless to say, that the people of this town, both Christians and Muslims co-exist in harmony and social cohesion.

We personally had had the indeed blessed opportunity to serve in this holy shrine as a Hegoumen and spiritual guide, a fact that linked us both with the holy place and its people.

Our company with you today is not only a pastoral one. It has a special meaning to us. And this is so because among the people present today, I recognize the new generation – without of course ignoring the older one – which [the new generation] has been nurtured with the traditions of Romiosyni and the love of the land of their parents and forefathers.

We have to admit that the Rum Orthodox Patriarchate is the one who on the one hand has protected and preserved the holiness and the universality of this place throughout the ages. On the other hand, it has been the guarantee of the preservation of the religious and traditional identity of the Christians who live here.

And today’s Paschal Feast is a steadfast proof and witness of this fact. Therefore we conclude our speech with the words of the hymn writer of the Church, St. John Damascene, who says: “It is the day of Resurrection, let us be radiant for the festival and let us embrace one another. Let us say O Brethren even to those that hate us; Let us forgive all things on the Resurrection; and thus let us cry: Christ is risen from the dead, by death hath He trampled down death, and on those in the graves hath He bestowed life”. Amen.