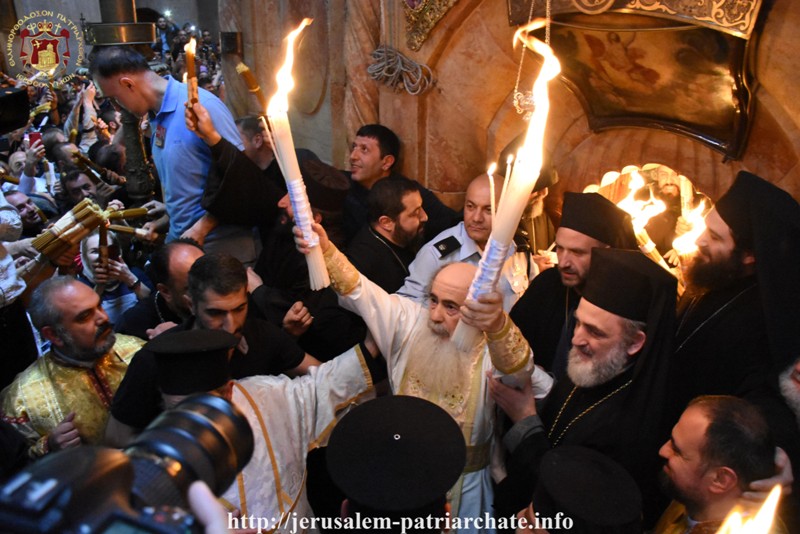 At noon on Holy Saturday, April 14/27, 2019, the Service of the Holy Light took place at the Patriarchate, according to the Typikon order and the Status Quo of the Patriarchate of Jerusalem.

Before the Service, His Beatitude the Patriarch of Jerusalem Theophilos III welcomed at the Patriarchate the Delegation that came from the State and Church of Greece in order to receive the Holy Light.

At noon His Beatitude escorted by Hagiotaphite Fathers, members of the Greek Delegation, members of Diplomatic Representations, and the Consul General of Greece in Jerusalem Mr. Christos Sophianopoulos, went down the stairs of St. James Cathedral to the Holy Altar of the Catholicon of the Church of the Holy Sepulchre.

There, He received the representatives of the Armenians, Syrians and Copts who came to receive His blessing to take the Holy Light.

The entrance of the Bishops through the stairs of the Catholicon followed, then His Beatitude and the Priests, dressed in their liturgical vestments, and the procession three times around the Sacred Edicule began, under the chanting of the troparia “Thy Resurrection O Christ” and “Joyous Light”.

After the third round of the procession His Beatitude remained with His sticharion and entered the Holy Tomb, as the Armenian Patriarch also entered and stayed by the Angel’s stone. His Beatitude prayed, received and transferred the Holy Light from the Holy Tomb from the north opening first to the Catholicon and then from the gate.

The faithful received the Light of the Resurrection of Christ in great happiness and gleefulness, transferring it also to one another, receiving it also for the sanctification of their houses in Jerusalem and other towns of Israel, of the Palestinian Autonomy and other countries.

At the end of the Service, His Beatitude returned in Procession to the Patriarchate Headquarters, bells tolling, with the Scouts opening the way. There His Beatitude gave the Holy Light to the Delegation of the Church of Greece and that of the Greek Government, under the lead of the Vice Minister Mr. Markos Bolaris and the Exarch of the Holy Sepuchre in Athens Archimandrite Damianos to transfer it to the Church and the country of Greece.

Bethlehem 2022.07.15 After being received by  representatives of the three churches...