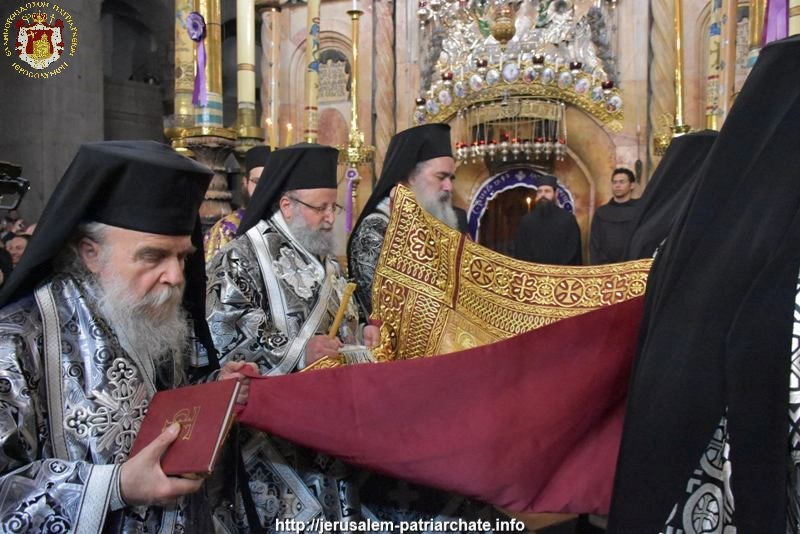 On Holy Friday evening, April 13/26, 2019, the Epitaph Service was held at the Church of the Holy Sepulchre.

The Service began with the procession of the Hagiotaphite Brotherhood from the Patriarchate, under the lead of His Beatitude the Patriarch of Jerusalem Theophilos.

When the procession reached the Church, the Service began with the Canon of Holy Saturday Matins, while the Priests were praying to receive the blessing and wear their liturgical festal mourning vestments, along with His Beatitude and the Archbishops.

At the end of the 9th Ode of the Canon the contrite Epitaph litany began from the Holy Altar of the Catholicon, with His Beatitude, the Archbishops and the Priests dressed in their liturgical vestments. When they reached the Sacred Edicule of the Holy Sepulchre they turned right towards the shrine “Touch me not” of the Franciscans, where a prayer was read, then they moved on to the chapel of the Seven bridges, of the Stocks, which has recently been renovated by the Patriarchate, of Logginus the Centurion, of the “They torn my garments”, of the Finding of the Cross, of the Crown of Thorns and of Adam.

When these stops and the prayers read at them were concluded, the procession went up to the Horrendous Golgotha.

There, His Beatitude read the Gospel narrative of the Crucifixion, which was followed by a prayer and the veneration by His Beatitude, the Archbishops, and the Consul General of Greece in Jerusalem Mr. Christos Sophianopoulos.

Afterward, four Archbishops took upon their shoulders the silk corporal of the adorned with golden thread Epitaph from the Holy Altar of Golgotha, which is above the hole-base of the Sacred Cross of Christ, and coming down the stairs with all the entourage, they placed it on the Deposition slate, and His Beatitude read before it the Gospel narrative of the Deposition.

A litany of the silk corporal three times around the Sacred Edicule followed, and then it was placed by the Archbishops on the slate of the Holy Sepulchre.

At the end of the 3rd part the Sermon of the day was read by Geronda Secretary-General Most Reverend Archbishop Aristarchos of Constantina, as per below;

“For the preaching of the cross

is to them that perish foolishness;

Today, as the day of Holy and Great Friday is setting and the day of the Holy and Great Saturday is about to dawn, the Church commemorates the Cross of Jesus of Nazareth, Christ the Son of God, and at the same time it commemorates  His burial. On the Cross, Jesus “having finished the mission that the Father appointed Him to do” (John 17:4), by saying “it is accomplished” (John 19:30), He gave up the ghost as human, on Friday evening, and just before the beginning of the Jewish Sabbath, He was buried. The task of His burial was undertaken by His secret disciple, Joseph of Arimathea. Having received the permission by Pilate, he removed Jesus’ body from the Cross and buried it at the empty tomb, which was carved in a stone by him, near the crucifixion place, where we are blessed to officiate this contrite Epitaph Service.

And while the Church commemorates a sad event, an event of death and especially a painful and humiliating death on the cross, with which the nature also was co-suffering and “was altered in pain”, and an event of a burial of “a divine in human body”, the Church does not lament, it does not mourn, on the contrary, it celebrates in contrition and modesty. It celebrates in joyful mourning. It celebrates its victory against death, through the death and burial of its Founder. It celebrates the mystery that is made familiar and understood through faith, that Jesus of Nazareth is the Incarnate Son of God. He is the One, Who took upon Himself the human nature, the whole of humanity. He is the One, in Whom according to St. Paul “dwelleth all the fulness of the Godhead bodily” (Col. 2:9) and in His Divine-human hypostasis, He descended to Hades through the Cross, then received again His glory and brought man in it along with Him. He appeared to those in Hades calling unto them, “enter again into Paradise”. Those who were bound in Hades in punishment did He make again citizens of Paradise. For the remission of the human sins, Christ willingly offered Himself a living sacrifice, immaculate before God, a sacrifice of blood (Hebrews 9:14). Through His divine blood that was shed on the Cross, he redeemed us from the curse, from the bondage of the letter of the Law. Being lifted up willingly on the Cross, He established with the blood of His pierced side His homonymous state, the Christian Church. This he adorned with His own blood (Acts 20:28). And in His salvific Providence, the once and for all sacrifice of His blood for the life and salvation of the world is being continued, as it is being offered now, a daily bloodless sacrifice in the Church and in the Holy Eucharist. In it, as it will be said in the Cherubim hymn of the evening Divine Liturgy of St. Basil the Great today, “the king of kings and the Lord of lords brings himself forth to be sacrificed and offered as food to the faithful”.

In the blood of His Cross, Christ united the two opposing worlds, the Judaic and the Greek, in one. He called the Jews who “were looking for a sign” and considered the cross to be “a scandal” and the Greeks “who sought wisdom” and considered the cross to be “foolishness” (1 Cor. 1:18-24), not to be “dismissed” but to join the ones “called unto salvation” considering the cross “the power of God that leads to salvation” and believing that “he is our peace, who hath made both one, and hath broken down the middle wall of partition between us; Having abolished in his flesh the enmity, even the law of commandments contained in ordinances; for to make in himself of twain one new man; And that he might reconcile both unto God in one body by the cross” (Ephes. 2:14-16).

Our Greek Nation is joined by its own free will in this one body, the body of Christ, the Church, “Where there is neither Greek nor Jew, circumcision nor uncircumcision, Barbarian, Scythian, bond nor free: but Christ is all, and in all” (Col. 3:11). Our nation has kept the sciences it discovered and all the nations have assimilated them thereafter, on every aspect of life, but it abandoned its Metaphysic beliefs on the Twelve gods and “took upon itself the name of God” of Jesus of Nazareth Who was crucified.  It accepted the preaching of the Apostle of Nations and in the Greek Democratic cities that used to be without peace and full of enmities, it created oases of cultivation of noble peaceful morals, of sanctification and of salvation. It created Churches, which are all over the Greek territory, in Cyprus, in Philippi, in Thessalonica, in Corinth, in Ephesus, in Crete. It throve in the architecture of marvellous Churches, in iconography, in hymn writing, in the Theology of the Ecumenical Synods. It lifted up Christ’s Cross as a banner of power and joy on the frequent fights against barbaric nations and in its victories, but also as a shield of patience through harsh times and calamities it underwent by its conquerors.

Moreover, in the places of the incarnate presence of our Crucified Redeemer, Christ our God, the Roman Orthodox nation has been magnified. Firstly at this Church of the Holy Sepulchre, the first official Church of Christianity, of the Emperor who is known with the phrase “with this [the Cross] you win], whose “beauty can be compared with the decorum of the heavenly firmament” and then to the Church of Nea and to the Churches of the Monasteries of the citizens of the desert, the Saints; Euthymius, Savvas, and Theodosios, and of  Sophronius Patriarch of Jerusalem, the Fathers who defended the doctrine of the one hypostasis and the two natures of Christ.

The witness of these Holy Fathers has been unceasingly exhibited by the Church of Jerusalem the Mother of Churches, which fights along with its Hagiotaphite Brotherhood and in this Sacred Edicule which is “a possession and offering to Christ of the Orthodox Romans in 1810” as its architect Kalfa Komnenos from Mytilene inscribed on it. Having been renovated two years ago, this Edicule protects and decorates the joy-and-life-giving Tomb, in which the Lord who was crucified in the flesh, was buried, still in the flesh, by the grace and power of Which, the Head of the Church of Jerusalem and Officiator of this Epitaph Service, His Beatitude Patriarch Theophilos, and the Brotherhood of the Holy Sepulchre with Him, wish to all of you, the noble pilgrims, “Happy Resurrection”.

The Service continued with the Eulogitaria, the Praises, and the Great Doxology before the Holy Sepulchre and the finishing of the Service was done inside the Catholicon, with the placement of the silk corporal on the Holy Altar. Then there were the readings of the prophesy, the Apolytikion and the Gospel narrative, the morning prayer and the Dismissal. At the end of all these, the Patriarchal Entourage returned to the Central Monastery, while the bells were tolling in a mourning tone.