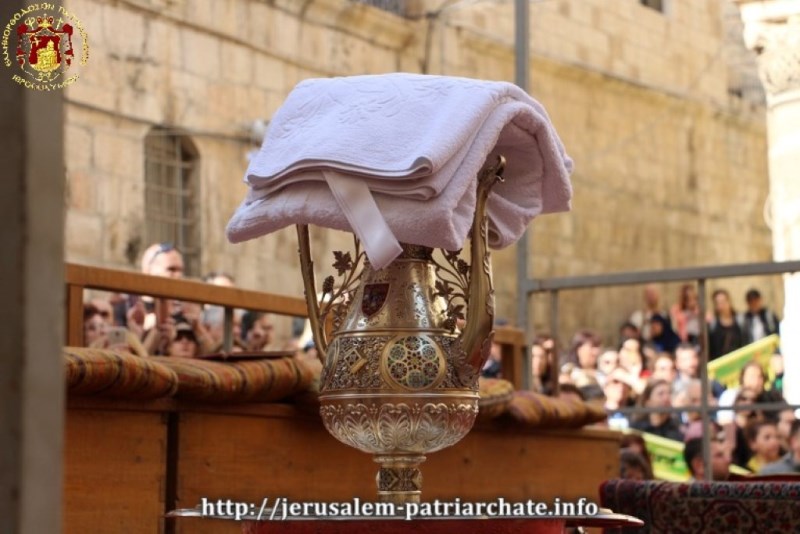 On Holy Thursday morning, April 12/25, 2019, the Divine Liturgy of St. Basil the Great was celebrated at the Holy Cathedral of St. James the Brother of God, led by H.H.B. our Father and Patriarch of Jerusalem Theophilos, with co-celebrants the Most Reverend Archbishop Aristarchos of Constantina, the Most Reverend Archbishop Theodosios of Sebastia and the Assistant Bishop Timotheos of the Patriarchate of Romania, Elder Kamarasis Archimandrite Nectarios as the first in the rank of the Priests, Archimandrite Meletios, and the Priest of the Cathedral Fr. Charalambos Bandour. The chanting was delivered by the Choir Leader of the Church of the Holy Sepulchre Mr. Constantinos Spyropoulos in Greek and the Choir of the Cathedral in Arabic, while the service was attended by the Consul General of Greece in Jerusalem Mr. Christos Sophianopoulos and members of the Greek Consulate, and a large congregation.

Immediately after the dismissal of the Divine Liturgy, bells tolling, the Service of the Sacred washing of the feet began at the Holy Courtyard of the Church of the Holy Sepulchre, on an elevated platform, according to the Typikon order of the Church of Jerusalem.

During the service, His Beatitude our Father and Patriarch of Jerusalem Theophilos washed the feet of twelve Hagiotaphite Hieromonks and Priests in commemoration of the event that the Lord during the Last Supper before His Passion, washed the feet of His Disciples, leaving them an example of humility.

At the end of the service the entourage returned to the Patriarchate Headquarters.

THE FEAST OF THE HOLY ANCESTORS OF GOD JOACHIM AND ANNA

On the commemoration of the parents of the Mother of God, the righteous ancestors of God...