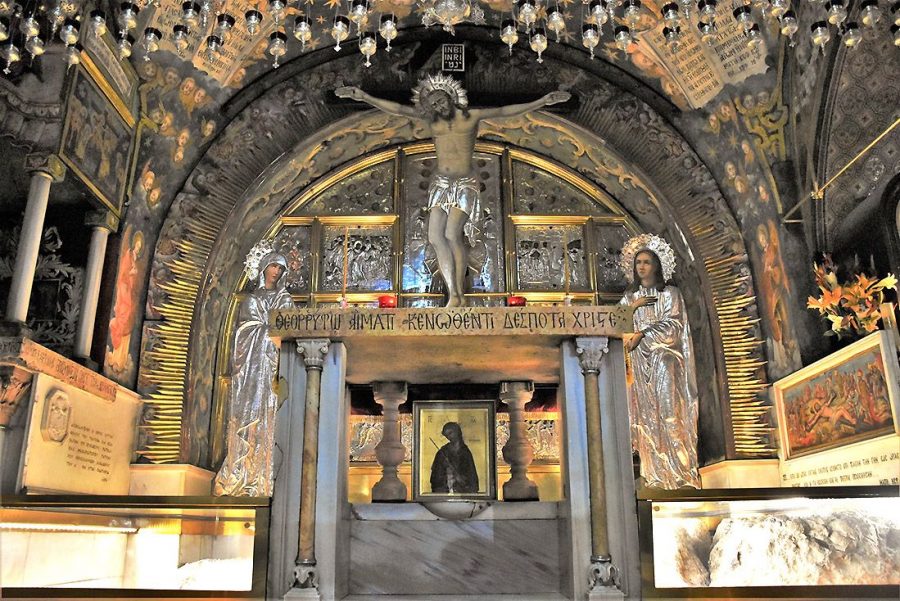 In their meeting on Thursday, April 5/18, 2019, at the Holy Archdiocese of Cyprus, their Beatitudes the Heads of Primeval Patriarchates, Theodoros II of Alexandria, Ioannis III of Antioch, Theophilos III of Jerusalem and Chrysostom II of Cyprus announced the following;

“Their Beatitudes the Heads of the Orthodox Churches in the Middle East, Theodoros II of Alexandria, Ioannis III of Antioch, Theophilos III of Jerusalem and Chrysostom II of Cyprus, met on April 18, 2019 at the Holy Archdiocese of Cyrus in Nicosia.

On their Meeting they prayed for the world peace, the stability of the Holy Churches in various parts of the world and especially of the tested Middle East. They also prayed for the relief of the peoples of this region, so that the faithful belonging to these Churches may continue their Orthodox witness for our Lord, the Resurrected from the dead, and especially here, in the blessed land where Christ and his all-famous disciples walked, as well as for the whole world, which longs and yearns for the hopeful redeeming message of the Gospel.

Their Beatitudes the Heads of Churches, underlined the need to  make maximum efforts to ensure stability in the Middle East and  discussed the most important ecclesiastical issues concerning the establishment of Christian presence in this region and the deepening of co-operation among local churches in the pursuit of the same goal. They also appealed to all political members to work, in view of the reflection on this region, for the elimination of the injustice brought to its peoples, in the wake of the wars, the occupation and the financial difficulties.During the private meeting, held by the two Heads of Churches Antioch and Jerusalem, in honesty, brotherhood and love, they exchanged various views on the problem, which employs two local Churches and expressed their intention and good disposition, to exceed direct impact on these difficulties, in order to reach the desirable Eucharistic Society.In addition, their Beatitudes the Heads of the Orthodox Churches in Middle East discussed the various ecclesiastical problems that occasionally arise within the Orthodox Church, and especially considered ways to solve them. They also discussed the problems that arose after the granting of the autocephalus to the Orthodox Church in Ukraine.

Following the briefing of His Beatitude Archbishop of Cyprus, Chrysostom, on the mediation initiative, which he personally undertook, the three Heads of Churches are aligned with this, so that His Beatitude will continue it for the benefit of the Orthodox Church in Christ.

In the spirit of this meeting, Their Beatitudes and Holy Heads of Churches, called on all sides to work on one hand to achieve the Eucharistic unity, which constitutes the body of the Church in Christ Jesus and on the other hand, to protect the faithful and the Holy Churches and Monasteries, all of which have been subjected to all kinds of acts of violence, from whichever source they arise, or whichever are the reasons and the motives that cause them.Their Beatitudes the Heads of Churches expressed their sadness on the total indifference by the States and the powerful of this world, regarding the fate of the two Metropolitans of Aleppo, Paul Ysziji and Ioannis Ibrahim, noting that the sixth anniversary of their kidnapping coincides this year with the beginning of the Holy Week.Lastly, the Heads of Churches first pointed out their intention and determination to continue this communication and cooperation for the good of the Church, then emphasized that in Orthodoxy, although the views may differ, the Orthodox Church is united and brilliant with Its Head, our God-man Lord, and continues its salvific course in the world.By completing their Meeting they lifted up prayers from their hearts to our Lord and our God, Jesus Christ, who suffered for us, so that through His divine and life-giving Grace, He may quickly heal the varied wounds of our people, and by the unwaning light of His glorious Resurrection, He may enlighten, give peace and comfort the hearts of the faithful, and lead everyone to the spiritual refreshment and keep us in the unity of faith and love, wishing to all a blessed Resurrection”.