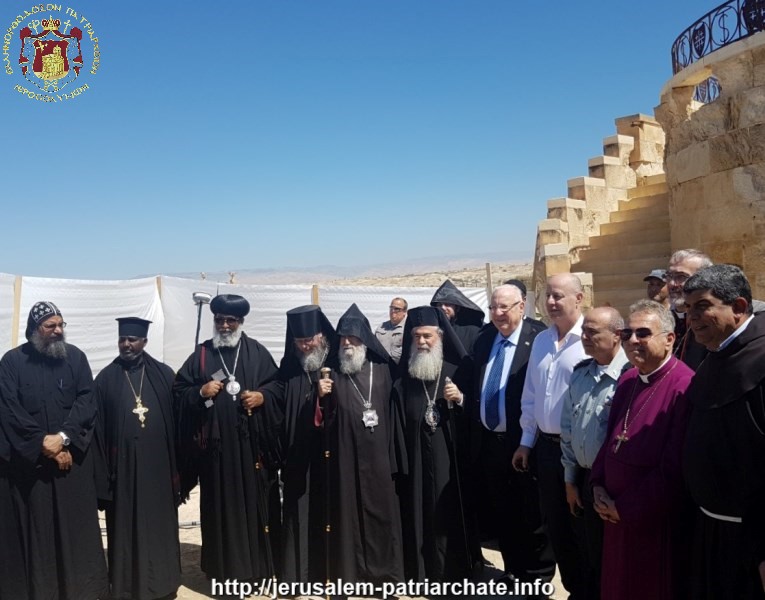 On Tuesday morning, March 6/19, 2019, the President of the State of Israel Mr. Reuven Rivlin visited the site of Qaser El Yahud by the river Jordan, escorted by the Minister of Regional Cooperation Mr. Tzachi Hanegbi, Mr. Yacub Salame and Mr. Ceasar Marjie from the Ministry of Religions of Israel and by the Israeli Military Officials of the region, The President also visited the properties of the Christian Churches in the area, which have been de-mined by Halo Trust and the Israeli army, and the nearby Holy Monastery of St. John the Baptist which has recently been restored and renovated by the Patriarchate.

In this Monastery the President was received by H.H.B. our Father and Patriarch of Jerusalem Theophilos along with the Heads of the other Churches of Jerusalem and Hegoumen Archimandrite Bartholomew.

The President Mr. Rivlin stressed the importance of the de-mining project of this area, which is a beacon of Christianity and praised the cooperation of the Churches for its accomplishment, as a means that secures the incoming of pilgrims from around the world, and a bridge among Israel, Jordan and Palestine and among Jews, Christians and Muslims.