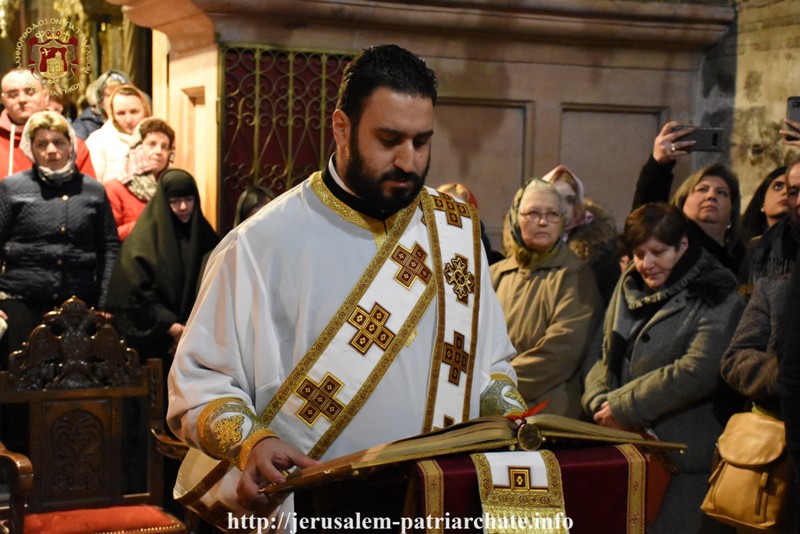 On Friday night towards Saturday, February 23 to 24/March 8, to 9, 2019, Hierodeacon Haralambos Farah was ordained a Priest during the Divine Liturgy at the Life-giving Tomb of the Lord by the Most Reverend Archbishop Philoumenos of Pella.

Before the ordination the Archbishop addressed the ordained with words related to the importance of the sacrament of Priesthood, while the ordained replied in thanksgiving, and promised obedience to the call of God in order to minister the Community of Kufr Yasif, to which he has been appointed.

Hagiotaphite Fathers, the Patriarchal Commissioner in Acre, Archimandrite Philotheos and Priests of that region, honoured the ordained with their co-celebration of the Divine Liturgy and called out “Axios” at his ordination along with the present congregation.

The ordained Priest’s wife, parents and parents-in-law honoured him with their presence.

The Archbishop, the ordained Priest and the congregation were offered a reception after the ordination by Geronda Sacristan, Most Reverend Archbishop Isidoros of Hierapolis at his Office.

The following morning, the ordained Priest received His Beatitude’s blessing.

The funeral service of blessed Archbishop Theophylaktos of the Jordan, according to our...