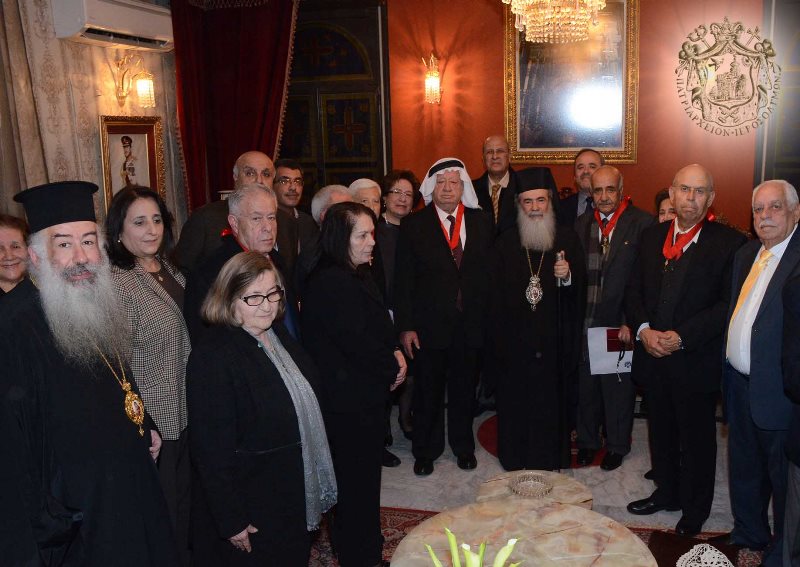 HONORARY DISTINCTION TO MEMBERS OF THE JORDAN CONGREGATION BY THE PATRIARCHATE

On Thursday evening of the Cheese fare week, February 22/March 7, 2019, H.H.B. our Father and Patriarch of Jerusalem Theophilos honoured with the medal of the Cross Bearer of the Order of Knights of the Holy Sepulchre the distinguished Orthodox Faithful who are spiritual children of the Patriarchate, for their work in construction of Churches and their activities of charity in the community and in charity centres, which advance the spiritual progress and prosperity of their communities. The ceremony took place in Amman at the Metropolis of the Patriarchate, in the presence of the Patriarchal Commissioner Most Reverend Archbishop Christophoros of Kyriakoupolis, the Most Reverend Archbishop Aristarchos of Constantina, Priest Issa, the representative of the Press of the Patriarchate in the Arabic speaking M.M., Archdeacon Mark and many Priests from the flock of Jordan, as well as many other people. His Beatitude honoured the following people;

Likewise His Beatitude offered an honorary plate of the Holy Metropolis of Amman in distinguished members of the congregation.

In this ceremony, His Beatitude announced the donation of 250.000 Jordan Dinars for the beginning of the construction of a Holy Cathedral in the town Fuheis, a suburb of Amman, and also honoured the Theologian Professor and Priest, Fr. Psara Evagelo Dahabra, who is a member of the Ecclesiastical Court, with the distinction of the Cross Bearer Dean Priest.