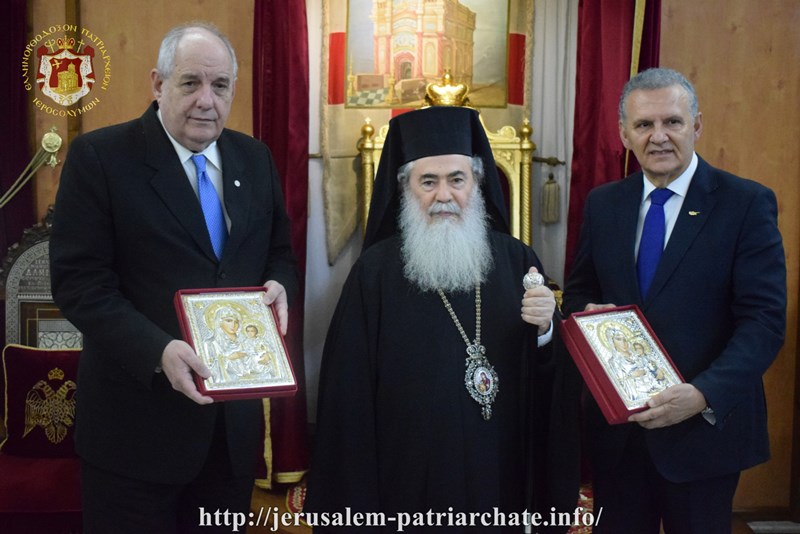 On Wednesday, February 14/27, 2019, a 10-member Delegation from Greece and the Republic of Cyprus visited the Patriarchate regarding expatriate-related matters. The Greek delegation was under Mr. Kouik, Deputy Foreign Minister for Greeks living Abroad and the Cypriot delegation under Mr. Fotios Fotiou, Presidential Commissioner for Expatriate-related matters, with the escort of the Consul General of Greece in Jerusalem Mr. Christos Sophianopoulos and of the Ambassador of the Republic of Cyprus in Israel Mrs. Thessalia Siambou.

This prestigious group was received by H.H.B. our Father and Patriarch of Jerusalem Theophilos and Hagiotaphite Fathers.

In this meeting there was a conversation on the importance of the knowledge and dissemination of the Greek language for the preservation of our national identity and on the significant role of the Church for this mission.

His Beatitude informed the members of the Delegation on the efforts of the Patriarchate for the safekeeping of the Rum-Orthodox identity of its flock and for its help in co-operation with the relevant governmental officials for the renovation of the Holy Monastery of St. John the Baptist by the river Jordan, which has been restored once again as a pilgrimage shrine, especially during the Feast of Epiphany.

The members of the Delegation thanked His Beatitude for this briefing and for His gifts, offered their gifts to Him and asked His prayers for the prosperity and security of our nation and His Blessing to venerate the Holy Sepulchre.