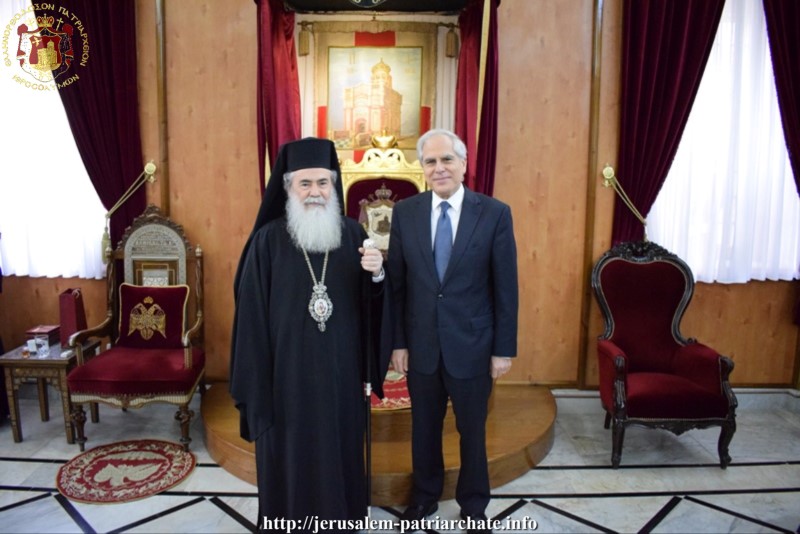 On Friday morning, January 26/ February 8, 2019, the Chief Secretary of the Ministry of Foreign Affairs of Greece, Mr. Demetrios Paraskevopoulos visited the Patriarchate, escorted by the Secretary of his office Mr. Kremydas, and by the Consul General of Greece in Jerusalem Mr. Christos Sophianopoulos.

Mr. Paraskevopoulos was received by H.H.B. our Father and Patriarch of Jerusalem Theophilos and Hagiotaphite Fathers.

In this meeting there was an interesting conversation on the respect the Patriarchate receives, as the first ecclesiastical institution in the Holy Land by the Kingdom of Jordan, the Palestinian Autonomy and by Israel, due to the balance the Patriarchate maintains with its policy of reconciliation.

Likewise, emphasis was made on the fact of the cooperation of the Christian Churches of Jerusalem under the leadership of the Patriarchate for issues concerning the Christians of the Holy Land.

Appreciating the long term good cooperation of Mr. Paraskevopoulos in support of the Patriarchate, and thanking him for this reason, His Beatitude ended the meeting by offering him gifts from Jerusalem and His blessings.