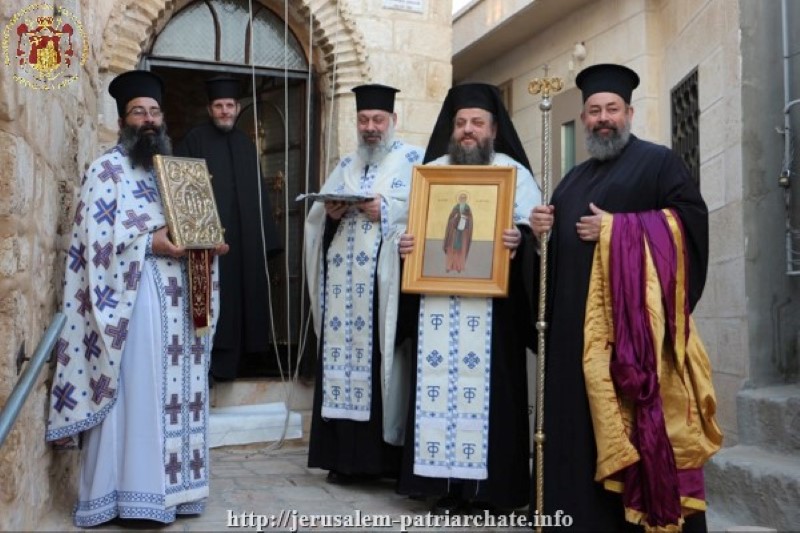 THE FEAST OF ST. EUTHYMIOS AT THE PATRIARCHATE

On Saturday January 20/ February 2, 2019, the Patriarchate celebrated the commemoration of our Righteous Father Euthymios the Great at the Holy Church and Monastery dedicated to him, which is adjacent to the Monastery of Panagia Sayda Naya, at the Christian Quarter near the Patriarchate.

He received thousands of monks in this Lavra and guided them, and St. Savvas the Sanctified was one among them, who came to the Saint in the year 456. Also a group from Persia came to the Lavra, members of which Saint Euthymios baptized, and one of them with the name Peter he ordained as Bishop of Paremvolon.

St. Euthymios fought from his Lavra against the heresy of Monofycitism and the prevailing of the teaching of the two natures of Christ, the divine and the human, according to the doctrine of the 4th Ecumenical Synod of Chalcedon in 451 A.D.

St. Euthymios was established a Great Saint by God and was deemed worthy of the gifts of clairvoyance and the working of miracles, and slept in the Lord in the year 473 A.D.

In honour of St. Euthymios and at his Monastery in Jerusalem, and not in the one in the desert, Vespers was held in the evening and the Divine Liturgy was celebrated on the morning of the feast, led by the Most Reverend Metropolitan Joachim of Helenoupolis, with co-celebrants Archimandrite Makarios and Archimandrite Ieronymos. The chanting was delivered by the Choir Leader of the Church of the Holy Sepulchre Mr. Constantinos Spyropoulos and the Patriarchal School of Zion students, while the services were attended by many local faithful and pilgrims who honoured the Saint.

H.H.B. our Father and Patriarch of Jerusalem Theophilos and Hagiotaphite Fathers came to venerate during the Divine Liturgy.

His Beatitude and the congregation were offered a reception by the Abbess of the Monastery Nun Christonymphi and the recently undertaking the duty of the Caretaker of the Monastery Priest Nikitas.