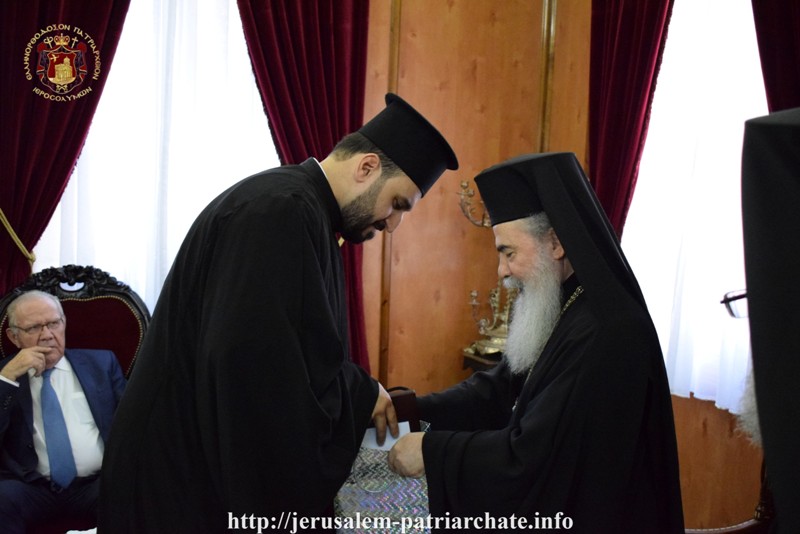 ORDINATION OF DEACON FARAH AT THE PATRIARCHATE

On Saturday morning, September 20/ October 13, 2018, the sacrament of the ordination of Mr. Charalambos Farah to Deacon took place at the Horrendous Golgotha by the Most Reverend Archbishop Philoumenos of Pella.

Before the ordination and at the point of the D. Liturgy when the Bishop said “and may the mercy of our great God”, the ordaining Archbishop and the ordained exchanged addresses on the ordination.

After the speeches and the troparia of the ordination, the ordained knelt before the Holy Altar of the Horrendous Golgotha and the Archbishop placed his hands on the Deacons head saying “the divine grace which heals all weakness…” and giving the liturgical vestments to the Deacon exclaimed “Axios, Axios!”

Likewise, “Axios” was exclaimed by the Patriarchal Representative of Acre Arhcimandrite Philotheos, the co-celebrant Priests of the area, the Deacon’s wife his relatives and fellow citizens. The town Koufr Yasif where the ordained comes from and where he will serve, belongs to Acre.

After the ordination, the ordaining Archbishop, the ordained Deacon and those who honoured him returned to the Patriarchate Headquarters and paid their respects to His Beatitude, thanked Him, and He addressed them with words of blessing, strengthening, comforting and salvation.