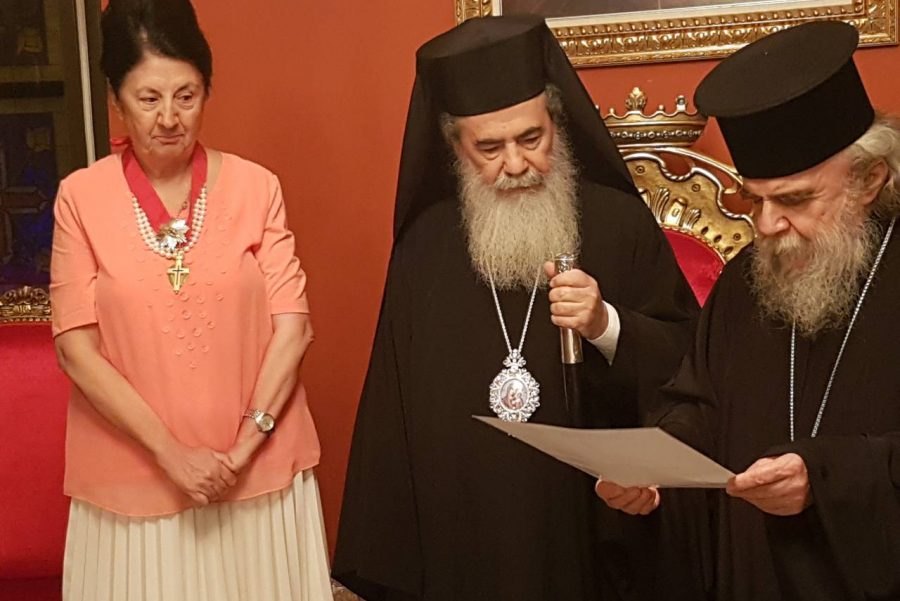 On Saturday evening, September 9/22, 2018, His Beatitude the Patriarch of Jerusalem Theophilos, while in Jordan and in the Patriarchal Committee in Amman, awarded the Ambassador of the Republic of Cyprus in Jordan, Mrs. Nausika Krousti with the medal of the Grand Commander of the Order of the Knights of the Holy Sepulchre, for her ministry to the Patriarchate of Jerusalem.

Emotional, the Ambassador of the Republic of Cyprus thanked His Beatitude for this valuable and honorary distinction in her address which was full of religious, Christian and national feelings in favour of her country as one can read below in the translated from the Greek full text of hers;

It is in excess of spiritual joy, awe, vigor, encouragement, and excitement and humble wisdom that I accept this supreme honour, which I will admittedly hold to my soul and heart as a precious praise. I have to say that in this perennial, long diplomatic course, where I have served as an Ambassador of the Republic of Cyprus for over 30 years, in a great number of nations, I have received praises for an operation which I have completed together with God, and I say this humbly.

This honour however, that is being done today is the most momentous and the most distinguished.

It is important to underline that the mandate given to my Diplomatic Service during my current term, was to strengthen the relationship between Cyprus and Jordan, whose relations have generally been accepted, to the highest possible level during those last years. The foundation of all the accomplished work was the two visits of the King of Jordan in Cyprus, namely in 2016 and in the beginning of this year, which were greatly appreciated by my own country. I must emphasize that I am completing my ministry with profound sympathy and thanksgiving to the Most Holy God for His continuous help and sympathy for all the work done in the cause, recognizing that without this help we can do nothing. Let us recall our Lord’s saying in this respect that “without me you can do nothing”.

I should at the same time take note of the fact that my present honor, for which I mercifully thank You, Your Beatitude, fulfills my soul in the most beautiful, and most precious way. I wish and pray that the Great Gift-Giver, our Lord-Donor, will bountifully shed His blessings to the All-holy Patriarchate of Jerusalem, under your enlightened leadership Your Beatitude, as well as to the Orthodox Church herein, under the prudent leadership of His Eminence, Father Christophoros.

I also wish and pray that our Lord will enlighten all of us, that our life may be a life in Christ, that our manner of living will be pleasing to Him. May our only concern be the practice of virtue and the conviction of the spirit, which is as the Apostle Paul says “Life and Peace”, longing and hoping for the Divine reward and the Divine payment. We remain with this steadfast hope, which we place before our Most Merciful and Most Kind Lord, which hope, the hope in God, as St. John Chrysostom wisely observes, is “Immortal and Immeasurable”.

It should be added that I remain highly excited with the current honorary distinction, considering also the unbreakable and strong, historical and spiritual bonds which adjoin the Most Sacred Patriarchate of Jerusalem with the Holy Church of Cyprus, bonds which rest on the sublime, priceless and inexhaustible wealth of the sanctified Orthodoxy. Your Beatitude, concluding my words, I find it befitting to note the following points: With God’s hope, we remain at the national level as a tried Cypriot Hellenism as we march on the path of the Cross, of the Turkish occupation in the last 44 years. As we mount the cross of Cyprus, it is with unshakable and steadfast faith that we behold our Crucified Lord and the Most Holy Theotokos, deeply convinced that we will find help and profuse mercy. Because, as St. John Chrysostom assures us “if God is with us, who can be against us?” “Being steadfast in the foundation of faith”, if I am to use the words of St. Paul, we can look forward to the national justification and the resurrection of the bleeding and crucified Cyprus.

With these words, which constitute an immense and deep longing of the soul, I conclude, thanking You again, Your Beatitude, from the depths of my soul. I also give thanks to the Most Reverend Father Christophoros and to all the Reverend Fathers, with particular reference to the Fathers of the Church of the Meeting of the Lord, where I used to be for my regular participation in the Church Services throughout my term of office. ”