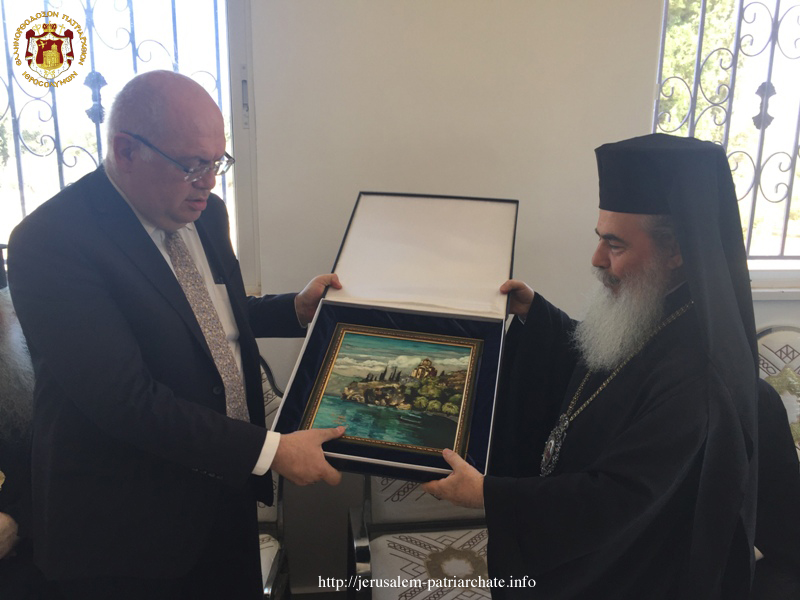 On Saturday afternoon, September 2/15, 2018, His Beatitude the Patriarch of Jerusalem Theophilos inaugurated a Sports Centre in Kerak – ancient city of Kyriakoupolis in South Jordan. This Sports Centre was founded within the frame of the “Initiative” of the Council of Churches in the Middle East, after a proposal made by His Beatitude, and the supervising of the Manager of the Patriarchate’s Office Mrs. Wafaa Ksous. The Centre covers an area of five acres which have been donated by the Minister of Public Works and Housing Sami Halasa.

The first buildings for this cause have already been built in the premises with the final aim of completing the appropriate buildings for the sports activities for youth of our congregation as well as for those of other Christian Churches and of the religion of Islam.

In the opening ceremony, His Beatitude honoured the Minister Mr. Halasa for his contribution, offering him a glass painting, as He also awarded ex-Member of Parliament Mr. Fares Ibrahim for his contribution. His Beatitude also offered icons to all who helped in the promotion of this project, an embossed table of Haram Sarif to the architects who belong to the religion of Islam, and an icon of Theotokos to Mrs. Wafaa Ksous and to the sponsors of the project Mr. Swen and his wife Mrs. Nina, who come from Munich of Germany.

After the opening ceremony, a meal was offered at a hotel in the town.

During the meal His Beatitude delivered the following address;

We are gathered here today for a great occasion, and we would like to take this opportunity to thank you all for being here today.

We are celebrating a unique prospect. In the establishment of this sports centre we are creating a place both for training in sports and also an academy for the training of leaders.

First, to encourage our youth to remain in their home towns and communities, because in this venture they can see a future for themselves here.

And secondly, to serve the Muslim and Christian Communities together, who have for generations lived as one family under the rule of the Hashemite Kingdom.

Sports is a global language that does not discriminate. Sports brings people together across every social, religious, political and economic divide, and provides a common ground for new friendships, and new possibilities.

The Patriarchate of Jerusalem, the Mother of all the Churches and the cultural mother of this land, is grateful to Almighty God for having given us this opportunity to establish this centre. For this centre is a blessing for our beloved Jordan and its people, and a tremendous encouragement for other projects of a similar nature that benefit our people and the integrity of our multi-cultural, multi-ethnic, multi-religious society.

We are deeply grateful to His Excellency the Minister, who has given this land to the Patriarchate to be used for the common social benefit of the inhabitants of the region of Kerak, and for his foresight in seeing the potential of this ambitious venture.

We are also deeply grateful to our German colleagues of Lands Aid, who have been keen to partner with us to establish this unique sports centre academy.

While there is no doubt that this project seems ambitious, at the same time we firmly believe that this centre will promote and serve in a practical way the socio-economic needs of the area. We are also convinced that this project will meet the needs of the local population, especially our youth, who long to have real opportunities for learning and a hope for a future in their homeland. Our sole intention as the Patriarchate is to serve the common good of this community.

We honour today the commitment of His Majesty, King Abdullah II, whose dedication to the well-being of all in the Hashemite Kingdom of Jordan is well known and an inspiration to all. We also acknowledge the support of His Royal Highness Prince Ghazi, without whose unremitting attentiveness and care this work would not prosper.

May God bless this project and all who are involved in it, and may God bless all the peoples of our beloved Jordan.