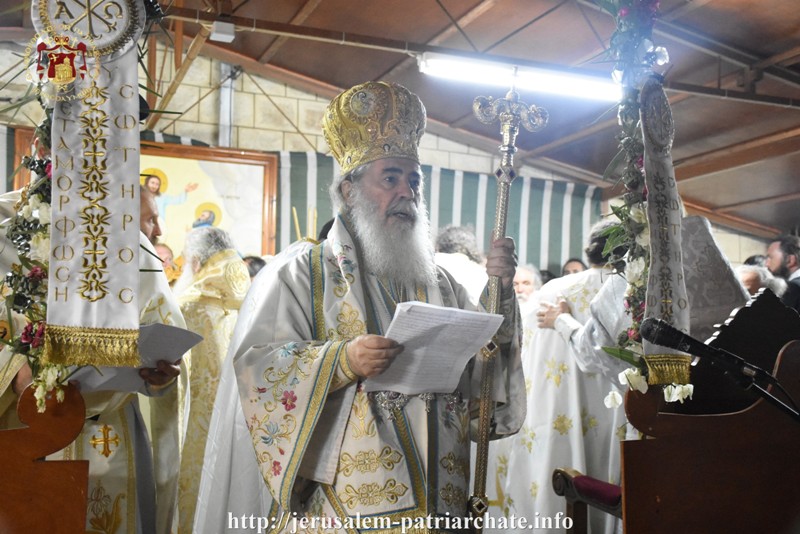 On Sunday August 6/19, 2018, the Patriarchate celebrated the Feast of the Holy Transfiguration of our Lord Jesus Christ. With this Feast the Church celebrates the commemoration of the narrative by the Evangelists according to which, forty days before the Lord’s Passion, He went up Mount Tabor and was transfigured in front of His chosen disciples, Peter, James and John. This means that He appeared to them in His divine glory and His face was brighter that the sun, while a bright cloud overshadowed Him and Moses with Elijah appeared next to Him, conversing with Him, and the voice of God the Father was heard saying: “this is my beloved Son, hear ye him” (Matt. 17:1-9, Mark 9:1-9, Luke 9: 28-36).

The Feast was celebrated;

“Christ took Peter, James, and John, into a high mountain apart, and was transfigured before them; and His face did shine as the sun, and His raiment was white as the light. And there appeared Moses and Elias talking with Him. And a bright cloud overshadowed them, and behold, a voice out of the cloud, which said: This is My Beloved Son, in Whom I am well pleased; hear ye Him” the hymn writer of the Church proclaims.

Our Lord Jesus Christ “Who coverest thyself with light as with a garment” (Psalm 104:2), has gathered all of us from the ends of the world to this sacred Mount Tabor, in order to celebrate His luminous Transfiguration and become participants of the light of Tabor.

“O changeless Light of the Light of Thine unbegotten Begetter, today, O Word have we now seen in Thy Light’s manifestation, the Father and the Holy Spirit as Light on Tabor, guiding with light all creation” the hymn writer says. This very changeless Light shone upon Christ’s face during His Transfiguration on this sanctified place, according to the witness of Apostle Matthew: “And after six days Jesus taketh Peter, James, and John his brother, and bringeth them up into an high mountain apart, and was transfigured before them: and his face did shine as the sun, and his raiment was white as the light. And, behold, there appeared unto them Moses and Elias talking with him” (Matthew 17:1-3).

Answering the question “what is transfiguration, what do we mean when we say that Christ was transfigured?” St. Chrysostom says that Christ allowed His disciples to see only as much from His divinity and glory as they could bear.

St. Gregory Palamas, referring to the teaching of the established God-bearing Fathers says; everybody is able to taste of the joy of the transfiguration’s Light. And this is so because the Light of our Lord and Saviour Jesus Christ’s Transfiguration is a foreteller of the future brightness of the chosen ones; “For many are called, but few are chosen” (Matt.22:14) says the Lord.

St. Gregory Palamas says that this Light was seen “by the first called of the Apostles – as you hear in the hymns of the Church – who saw the very essence of God’s ever-unending strength…the brightest illumination of the original beauty, this kind of the divine beauty without form, through which man is deified and becomes worthy of conversing with the divine, this ever-unending heirless kingdom of God, this unapproachable light, a light heavenly and boundless, timeless, ever-unending, a light radiating incorruption, God’s light to the deified…one grace of the Father the Son and the Holy Spirit, which was made visible even to the physical eyes…”

The Light of Tabor, my dear brothers and sisters, can be known by the pious faithful through humility and the perfect love in Christ. The Saints of Christ’s Church became participants of this experience. This was also accomplished by the martyrs of the Church, through the love in Christ and the unceasing pure prayer. St. John of Damascus says that the mother of prayer is silence, and that prayer is the manifestation of the divine glory. In other words, when we secure our senses and be alone with ourselves and with God, and having become freed from the turbulence of the outside world, we come to ourselves, then we are able to see very clearly the kingdom of God within us. Because “the kingdom of heaven” which is the kingdom of God, “is within us” the Lord says (Luke 17:21).

The indeed paradox and marvelous events that took place during the transfiguration of our Lord and Saviour Jesus Christ, refer to the mystery of the divine providence, whose climax is His Passion on the Cross and His resurrection from the dead.

Let us hear the hymn writer saying; “Before Thy Cross, O Lord, a mountain became like unto Heaven, and a cloud spread out like a tabernacle. When Thou wast transfigured and the Father bear witness to Thee, Peter with James and John were present, for they also were to be with Thee at the time of Thy betrayal; so that having seen Thy wonders, they might not be afraid at Thy sufferings, which may we be counted worthy to worship in peace, for Thy great mercy’s sake”.

In other words, another purpose of the manifestation of the divine glory, of the power of the Lord, was to reveal the forthcoming illumination of the resurrection. This is what Apostle Peter witnesses at his second epistle by saying; “For we have not followed cunningly devised fables, when we made known unto you the power and coming of our Lord Jesus Christ, but were eyewitnesses of his majesty. For he received from God the Father honour and glory, when there came such a voice to him from the excellent glory. This is my beloved Son, in whom I am well pleased. And this voice which came from heaven we heard, when we were with him in the holy mount” (2 Peter 1:16-18).

Through his personal and true witness, Apostle Peter calls all of us who honour the commemoration of the Holy Transfiguration of our Lord and Saviour Jesus Christ, to become heirs of the uncreated light of His glory. “For this is the will of God, even your sanctification” (1 Thess. 4:3) St. Paul says.

Let us therefore say along with the hymn writer: “For with thee is the fountain of life: in thy light shall we see light” (Psalm 36:9). Deem us worthy of Your illumination Christ our God, by the intercessions of the Most Blessed Theotokos and Ever-Virgin Mary, and those of Your Holy Disciples, Peter, James and John and of the Prophets who saw God, Moses and Elijah and of all the Saints. Amen”.

After the Divine Liturgy His Beatitude blessed the grapes and the various seeds according to the custom.

On the day of the Feast the Divine Liturgy at the Monastery was officiated by the Most Reverend Archbishop Philoumenos of Pella, with many co-celebrant Priests from the neighbouring areas and the participation of a very large congregation.

At noon, the Hegoumen of the Monastery Archimandrite Hilarion offered a meal with fish and grapes for the Patriarchal and the Episcopal entourages.

In the morning of the Feast, the Holy Transfiguration was celebrated at the Palestinian city of Ramallah, in the centre of which lies the Patriarchate’s Holy Monastery of the Transfiguration.

The Divine Liturgy was led by the Most Reverend Archbishop Theophanes of Gerassa, with co-celebrant the Hegoumen of the Monastery Archimandrite Galaktion and Priest Jacob, with a large congregation attending the service.

After the Divine Liturgy the Hegoumen Archimandrite Galaktion and the Community Council offered a meal to the Episcopal entourage and others.

Likewise there was an Episcopal Divine Liturgy at the Sacred Shrine of Gethsemane, led by the Most Reverend Archbishop Theodosios of Sebastia.