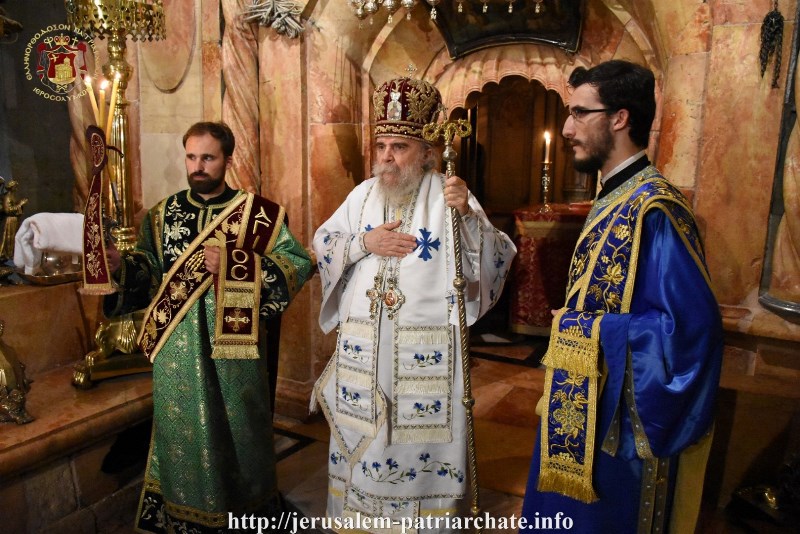 On Monday night to Tuesday August 1/14, 2018, subdeacon George Hader from the Baramki family was ordained a Deacon, by Geronda Secretary-General Most Reverend Archbishop Aristarchos of Constantina.

The ordination took place according to the decision of the Holy and Sacred Synod, chaired by H.H.B. our Father and Patriarch of Jerusalem Theophilos, with the prospect of the forthcoming ordination of Deacon George to Priest, in order to serve as a ministering Priest at the Cathedral of St. James the Brother of God.

The Archbishop who performed the ordination addressed the ordained as follows;

Following the proposal of the Priests, Vestry men and of the Presidents of the Orthodox Institutions of the Cathedral of St. James the Brother of God and First Hierarch of Jerusalem, and by the blessing and approval of H.H.B. our Father and Patriarch of Jerusalem Theophilos and the Holy and Sacred Synod, the Grace of the Holy Spirit calls you today to accept the first degree of Priesthood, that of the Hierodeacon.

The Patriarchate of Jerusalem, the Mother of Churches, has appreciated your morality, character, the Christian upbringing you have received from your parents, your excellent Secondary Education, your Higher education at the University of Bethlehem, your Theological education at the Russian Orthodox University of St. Tychon in the U.S.A., your knowledge of the Greek language after your studies at the University of Thessalonica, your honest love for Christ and the Church and your work as a teacher of Religion at the Russian School of Bethany.

This hour is indeed great and sacred, because the sacrament of the Priesthood is being held simultaneously with the sacrament of the Divine Liturgy, and more especially, as these take place at the Horrendous Golgotha, where Christ shed His blood for the remission of our sins, and at His Life-giving Tomb, where He was buried and risen from the dead.

Accepting this sacrament, you will have the grace to enter the Holy Altar, to minister the Priests and Archbishops until the time for your becoming a Priest comes, and you should minister in a spirit of sacrifice and offering according to the Orthodox teaching, at the historic parish of St. James’ Cathedral.

You should thank God for this calling and gift, and consider thoroughly the great responsibility that you undertake; appreciate the trust that the Church puts on you and pray fervently, so that by the placing of the Archbishop’s hands on your head, the Holy Spirit will come down on you and make you a vessel of the Grace of the Holy Trinity, in order to always please both God and the people.

Be sure that at this hour, you are accompanied by the prayers of your parents, your wife, your relatives, of Fr. Farah and the congregation of St. James and of all those who honour you with their presence here.”

With the coming of the Holy Spirit and the prayer of the deacon’s ordination, the Archbishop dressed the ordained with his liturgical vestments and the people hailed “axios” in great joy.

After the dismissal of the Divine Liturgy the ordained offered a reception at the Office of Geronda Sacristan for those who honoured him, the Archbishop who ordained him, the co-celebrant Priests, his parents, wife and relatives, who wished him to please both God and the people.