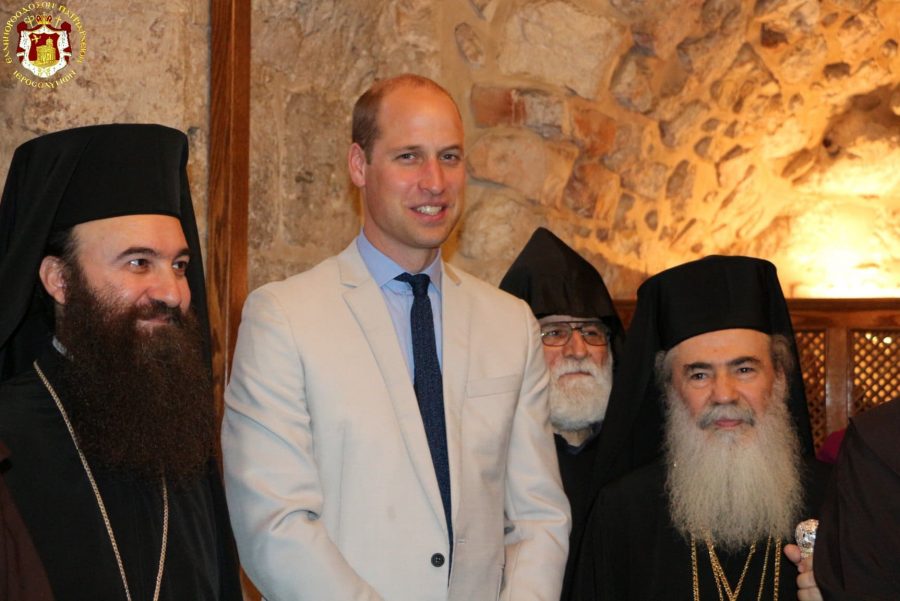 On Thursday morning, June 15/28, 2018, His Royal Highness the Duke of Cambridge Prince William, firstborn son of Prince Charles of Wales and of Princess Diana, and Grandson of Her Majesty the Queen of Great Britain Elizabeth, visited the Church of the Holy Sepulchre while on a trip to the State of Israel and the State of Palestine. His Royal Highness was escorted by the Anglican Archbishop in Jerusalem Most Reverend Souhel Dawani, members of the Consulate of Great Britain in Jerusalem and of the Israeli Police force.

His Royal Highness Prince William was escorted and guided around the Church of the Holy Sepulchre, the All-Holy Tomb, St. Nicodemus Tomb, the Horrendous Golgotha and the Sacristy where the Sacred Wood of the Cross is, by H.H.B. our Father and Patriarch of Jerusalem Theophilos and Hagiotaphite Fathers.

At the Horrendous Golgotha, His Beatitude addressed Prince William as follows:

We welcome you, Your Royal Highness, to the Holy City of Jerusalem and to this most Holy Place, where our Lord Jesus Christ, the Righteous One, shed His blood to bring reconciliation and peace to humankind. Here, reconciliation was made manifest between God and humanity, and within the human family. Here, our common human destiny was revealed.

As we read in the Psalms, Mercy and truth are met together; righteousness and peace have kissed each other (Ps. 85:10). Here, this meeting was accomplished on the Cross.

The Christian Community has managed to remain in this region for over 2000 years, because we are a community of reconciliation. The Cross of the risen Christ is the Cross of hope, for the Cross is the assurance that just such peace and reconciliation are possible.

We appreciate your presence among us, for your presence brings hope in turbulent times. We wish to take this opportunity to congratulate you and the Duchess of Cambridge on the recent birth of your son, Prince Louis. We pray to Almighty God that you will be sustained in your mission, and that you will draw strength from your visit to the tomb of your noble Grandmother, Princess Alice, as well as to this Holy place, to be an agent of reconciliation and peace in our world. Thank you.

Finishing His address, His Beatitude offered the Prince and icon of the Sacred Edicule and then a reception was offered to His Highness at the Office of Geronda Sacristan Most Reverend Archbishop Isidoros of Hierapolis.

Having completed His visit at the most historic and sacred shrine of Christianity, as He said, and thanking for the welcoming reception, His Highness the Duke of Cambridge departed in order to continue His mission.