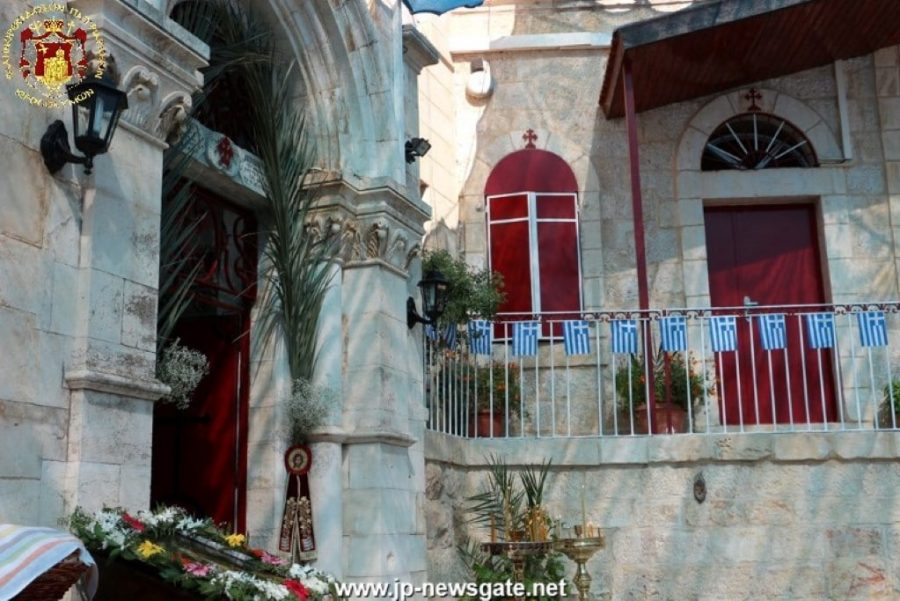 THE FEAST OF SAINT ONUPHRIOS AT THE PATRIARCHATE

On Monday, June 12/25, 2018, the Patriarchate celebrated the commemoration of our Father among the Saints Onuphrios of Egypt, at the his Holy Monastery which is located at a short distance from the Biblical Siloam pool in East Jerusalem.

This district is also named “The potter’s field”, because it on the field that the Lords’ of the Jews bought with the thirty silver coins Judas the traitor returned to them when he regretted his crime. They wanted to use the field for “the burial of the foreigners”.  For this reason the Monastery is build above caves carved in rocks that were used as tombs. One of these tombs belongs to the first Patriarch of Jerusalem St. Iouvenalios (451 A.D.).

At the Holy Church of this Monastery, Vespers was held in the evening, and the Divine Liturgy was celebrated on the morning of the Feast, led by the Most Reverend Metropolitan Isychios of Kapitolias, with co-celebrant Hagiotaphite Hieromonks, with first in rank Elder Kamarasis Archimandrite Nectarios, the Archimandrites Ignatios and Kalistos, Archdeacon Mark and Hieromonks and Deacons from the Holy Metropolis of Patra from the Church of Greece. The hymns were delivered by the Reverend Archimandrites Eusevios,( who is also the Choir leader of the Central Monastery of the Patriarchate), and Demetrios, while the service was attended by nuns, and noble pilgrims.

His Eminence read the Sermon of the day on behalf of His Beatitude as follows;

“Godly-wise Father Onuphrius, in spirit thou didst become great Elias’ follower, for thou dweltest far removed from the turbulence of the world; thou didst deny all the yearnings of the flesh and didst abide in the barren wilderness, where, with exceeding joy, thou, O blessed man, didst soar aloft in soul to the Heavens where thou truly hadst thy citizenship”. The Hymn writer of the Church proclaims.

The Grace of the Holy Spirit that has dwelled in our Father among the Saints Onuphrios has gathered us all in this sacred shrine of the potter’s field, where the Holy Monastery dedicated to the Saint lies, in order to celebrate the great sacrament of the Eucharist, the bloodless sacrifice to our Trinitarian God.

Our Father among the Saints Onuphrios, who came from Egypt, became a citizen of the kingdom of heaven and conversed with the Angels. He managed this after he had heard of the lives of zealot Prophet Elijah and of St. John the Baptist and Forerunner. Our Father Onuphrios became imitator of these Holy prophets and Hermits, retreating to the inner desert where he lived for sixty years, “having seen no man in all these years” according to his synaxarist.

By his escape in the inner desert, our Holy Father became “an emmigrant from this world of confusion” and “disclaimer of the passions of the flesh” hearkening to the words of St. Paul saying: “For to be carnally minded is death; but to be spiritually minded is life and peace” (Romans 8:6).

So arduous and great was the ascesis of our Holy Father in the dry desert , that “he didst soar aloft in soul to the Heavens where He hadst his citizenship”  according to the hymn writer. St. Onuphrios accomplished this hearkening to the words of David and Paul. St. Paul says; “For I reckon that the sufferings of this present time are not worthy to be compared with the glory which shall be revealed in us” (Romans 8:18). And in more detail; do not marvel that we suffer persecution and sorrows. For reasonably thinking, I am convinced that what we suffer and endure in this current time cannot be compared to the glory which is destined to be revealed and given to us.

And Prophet David sings; “As for man, his days are as grass: as a flower of the field, so he flourisheth. For the wind passeth over it, and it is gone; and the place thereof shall know it no more” (Psalm 103:15-16). The days of man, David says, are like the fresh and temporary grass. Just like the flowers of the fields, man flourishes for a little while. When the hot wind blows over the flower, it is destroyed and the flower is no more, leaving no trace behind of its former presence. Likewise, man goes away and never comes back, and he is forgotten.

My dear Brothers and Sisters, our Holy Church, the faithful members of its body, are rejoicing today on the glorious commemoration of our Father among the Saints Onuphrios. And this is so, because our Holy Father “from Heaven didst receive gifts transcending the mind of man, piously imparting them unto those, who longed for tokens of his ascetic feats;” according to the hymn writer.

And we ask ourselves, what are the attributes of St. Onuphrios’ ascesis? They are the fact that our Holy Father became a vessel of the grace of the Holy Spirit, he became son of God, as St. Paul preaches; “For as many as are led by the Spirit of God, they are the sons of God” (Romans 8:14). This means that all those who are governed by God’s Spirit are sons of God.

In other words, God’s Spirit is the One Who should lead all the actions and deeds of our lives, as St. Ekoumenios says; “They will make [the Spirit of God] charioteer and leader for all their lives. And according to the Church Father Theodoritos Kyros “The regal Spirit” is the spirit, the mind, which rules and thus leads and helps man to overcome his passions and weaknesses. Wherever the “Spirit of God” blows, namely the Spirit of the Lord, there freedom lies, as St. Paul preaches; “Now the Lord is that Spirit: and where the Spirit of the Lord is, there is liberty” (2 Cor. 3:17). Our Father Onuphrios became participant of this liberty of the Spirit of our Lord and God and Saviour Jesus Christ.

The exceptional character of the ascetic of the desert St. Onuphrios of Egypt, is not only an example to imitate, but also an exhortation to all the faithful and those who honour his commemoration, to protect themselves from the “spirit of error” (1 John 4:6), which unfortunately dominates the minds and hearts of many of our Christian brethren, as St. Jude preaches by saying; “How that they told you there should be mockers in the last time, who should walk after their own ungodly lusts. These be they who separate themselves, sensual, having not the Spirit. But ye, beloved, building up yourselves on your most holy faith, praying in the Holy Ghost; Keep yourselves in the love of God, looking for the mercy of our Lord Jesus Christ unto eternal life” (Jude 18-21).

Let us therefore entreat our Holy Father Onuphrios and our Holy Father Peter of Athos whom we also commemorate today, along with the Theotokos the Mother of God the Word, the Most Blessed One,  the Ever-Virgin Mary, so that by their intercessions to our Lord and Saviour Jesus Christ, we may heal the passions of our souls. Amen.”

After the Divine Liturgy, there was a special prayer for the fruit and a memorial service at the tomb of the founder of the Monastery and the tomb of Nun Seraphima.

Finally the Abbess of the Monastery Nun Paissia offered a festal reception to the Episcopal entourage at the Hegoumeneion and to all the pilgrims at the courtyard of the Monastery.