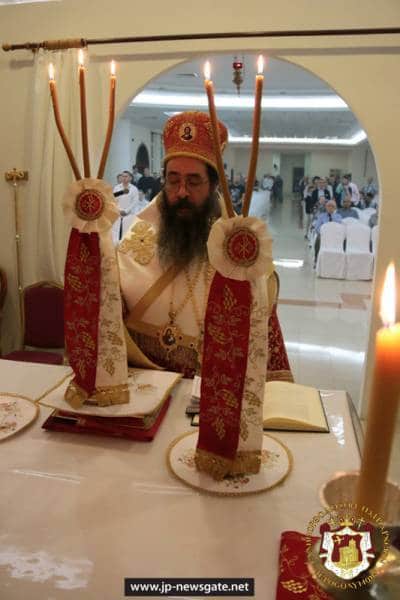 CHRISTMAS AT THE H. ARCHDIOCESE OF QATAR

Christmas was celebrated with ecclesiastical brilliance in Doha, Qatar.

The Service of Matins was followed by the D. Liturgy in the Arabic and English languages on Sunday evening December 11/24 2017.

On Monday morning December 12/25 2017, Matins and the D. Liturgy were celebrated in the Greek and Romanic languages, at the presence of the Consul of Greece in Doha Mr. Iannis Zemolosidis, the Military attaché General Panayiotis Krikis and the participation of the Christian congregation of the local Church.

On Saturday December 24, 2017/ January 6, 2018, Matins and the Divine Liturgy were celebrated in the Slavonic and Serbian languages with the participation of many faithful.

The Services were officiated by the Most Reverend Archbishop Makarios of Qatar, with co-celebrants Priest Demetrios and other clergy. Instead of a Sermon, the Christmas message of His Beatitude the Patriarch of Jerusalem Theophilos III was read, translated in the languages in which each Service was held. Accordingly, the choirs sang in all relevant languages.

THE FEAST OF HOLY HIEROMARTYR HARALAMPUS AT THE PATRIARCHATE