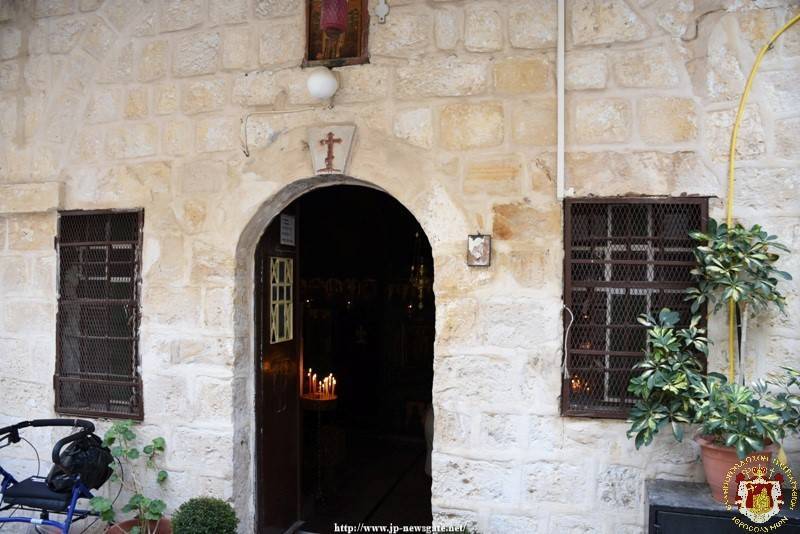 THE FEAST OF ST. SPYRIDON AT THE PATRIARCHATE (2017)

The memory of our Father among the Saints Spyridon was observed by the Patriarchate on Monday December 12/25 2017 at his Holy Monastery, in the Old City of Jerusalem on the interior side of the Wall by Damascus Gate.
The Church honours St. Spyridon as its Father. He was from Cyprus, shepherd in the occupation, he was married and  fathered a daughter. After the deaths of  his wife and daughter, he became the Bishop of Trimithounta and took part in the 1st Ecumenical Synod in 325 A.D., where he courageously defended the “One nature” (Omoousion) of the Son with the Father . The Saint was distinguished in holiness and every other virtue and was deemed worthy of the gift of clairvoyance. He was also a wonder worker, as he “summoned a woman from the dead”, through his prayer he stopped drought, halted the flood of a river, healed a sick king. He had angels as co-celebrants in the Divine Liturgy and with all the above signs he was called a wonder worker.

This most holy Father was honoured by the Patriarchate with Vespers in the evening and the Divine Liturgy in the morning of the feast, officiated by the Most Reverend Metropolitan Isychios of Kapitolias and co-celebrant Hagiotaphite Hieromonks. The choir was led by the choir leader of the Monastic Church of Saints Constantine and Helen Archimandrite Eusevios, at the presence of a great congregation of monks, nuns and laity from Jerusalem, pilgrims from Greece, Russia, Ukraine, Romania and Cyprus.

During the Divine Liturgy, our Father and Patriarch of Jerusalem Theophilos came for veneration, escorted by Hagiotaphite Fathers, under the blessing of heavy rain.

The Patriarchal and Episcopal entourage as well as the congregation were offered a reception at the courtyard of the Church by the Hegoumen of the Monastery Archimandrite Sergios.