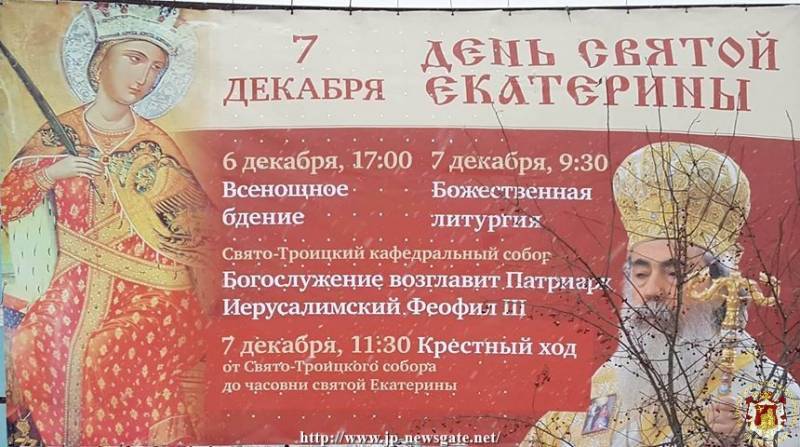 His Beatitude our Father and Patriarch of Jerusalem Theophilos officiated the Divine Liturgy at the chapel of St. Catherine in the Holy Church of The Holy Trinity in Ekaterinburg of Russia, according to the calendar of the Russian Orthodox Church on Thursday 24th November/7th December 2017.

After the Divine Liturgy His Beatitude our Father and Patriarch of Jerusalem Theophilos addressed the congregation as follows;

Being in the city of St. Catherine as pilgrims by the invitation of your most devout pastor, in order to co-celebrate the memory of your patron Saint with this noble congregation, we wholeheartedly thank His Beatitude for the honorary invitation to Our mediocrity. From the Holy City of Jerusalem we convey the Gospel of our Lord who became Incarnate in the humble manger of Bethlehem for our salvation, abundantly offering to all of you the Life-giving grace of the All-holy Tomb, by which all creation is illumined, namely “the heaven the earth and everything beneath”, with the unwaning light of the Resurrection.

As we celebrate today the memory of Catherine the Great Martyr of Christ, who shines like another aurora borealis over the luminous shimmer of the martyrs, especially in this ultimate time of the earth, we feel indebted to offer hymns of praise to the protector of your city. We praise the feats of this all-wise woman, the modest and dexterous bride of Christ, the reliable guide “to the narrow and sorrowful path”, which leads however to the Kingdom of God, wherein the faithful friends of the martyrs march in great jubilance.

With extended hands and from the depths of our heart we beg her to remain always an irrefutable companion and defender of all the servants of God against the various deceitful workings of the lurking enemy.

We wholeheartedly thank her for being quick to intercede to the All-gracious God for every faithful beseeching her help, especially for those who willingly carry the cross of the martyrdom of consciousness.

The Saint knows by her personal experience the pain of the martyrdom, but she also knows the glory of the saints. They suffered a little in this temporary life and received the eternal wreath of unceasing beatitude, and being the praising choirs of the righteous, they surround the throne of glorified Christ, forever celebrating the heavenly Liturgy. The Saint in fact denied herself and lifted up her cross and followed Christ, considering pulchritude, worldly wisdom, wealth and all other gifts given to her by the mercy of God too little, compared to the spiritual wealth. She thought of all these as “petty things”, so she despised them “in order to win Christ”. She displayed bravery according to the council of the Proverbs on the bravery of the woman, and patiently endured the torments contrived by the maliciousness of the people. In that manner, by the grace of God she was highlighted an eternal prototype for every Christian.

Catherine the great martyr is an ecumenical saint. She is honoured in the East and the West, by native Orthodox peoples and converts by missionary work, in parishes and monasteries. She is especially honoured in the Church of her hometown at the Patriarchate of Alexandria, as well as in the God-trodden Mount Sinai, which belongs to the jurisdiction of the Jerusalem Patriarchate for many centuries. She is also honoured in the vast land of Russia and the other Slavic Churches, in the blessed Greek-speaking world, and especially in every Church and every Monastery dedicated to her name. The reverence of the Orthodox people highlighted the commemoration of the Great Martyr in a prominent position among other feasts, especially by placing her feast after the apodosis of the Entrance of the Theotokos in the Temple.

According to the scriptures of the saints that narrate St. Catherine’s life, our Lady Theotokos, at the Lord Christ’s command, gave the Saint “the ring” signifying her betrothal to Him. In that manner the Theotokos became the guide to the union of the Saint with the perfect love of the perfect man, namely the God-man Christ. According to the wise Archbishop of Thessalonica, St. Gregory Palamas, and our Father among the Saints Nicodemus of Mount Athos, the Theotokos is the most perfect creature that has ever been born in the world. All creation came into existence so that the Theotokos would be born, the woman who due to her immaculate purity would be able to bear the perfect God in her womb and consequently nurture Him. God the Word became incarnate so that He would be one of the people, and therefore be in communion with the people. This union of the created with the uncreated in the incarnate presence of Christ became the ladder that bridges the communion with God for all people. This is the pre-conceived plan of God, according to St. Maximus the Confessor. God the Word became incarnate not only to redeem the humankind from sin and corruption, but also to give it the chance of the full communion with Him, which is feasible to all those who willingly follow the path of the martyrdom of consciousness and of blood. Today’s honoured St. Catherine was related to this perfect woman, the Theotokos. Both of them stand by God as bold intercessors. You have such a powerful protector and patron Saint for your city, that you should feel the absolute spiritual and physical security.

St. Catherine was distinguished for her strong worldly wisdom and immense patience in the atrocious tortures of her martyrdom. Nowadays that the secularized society is being projected and proclaimed, unfortunately led by foreign to the Christian doctrine authorities, the spirit and mind of the Saint are a bright beacon for all of us. As it was rightly noted by the Holy and Great Synod of the Orthodox Church in Crete last year: “In these years of secularization, the need to highlight the significance of the holiness of life becomes imperative, as we face the spiritual crisis which characterizes the contemporary world… The Orthodox tradition that has been shaped by the actual living of the Christian truth, is a carrier of spirituality and of ascetic ethos, which should be projected and highlighted especially in our contemporary era”.

Therefore, all of us the Orthodox Christians owe to bear witness to the Gospel of Christ in unity and strength, thus becoming “the light of the world” and “the salt of the earth”. It is a necessity for all Christians to realise that the starting point for the re-evangelization is the concrete testimony of Christ, of course in unity and respect of the ecclesiastical institutions, primarily of the Synodical institution.

Hence we urge you, beloved brothers and sisters in Christ, to love Christ according to the example set by the Saint, wholeheartedly, and strive at all costs to proclaim our faith to all nations. In that manner Orthodoxy will be established once more the certain hope of the world.

May the grace of our All-gracious God be with you all!”

After the Divine Liturgy there was a Litany around the city.

At noon, the Governor of the city offered a meal to His Beatitude at the State Building, where His Beatitude offered him a copy of the recently discovered at the restoration of the Sacred Edicule cross of the architect Kalfa Komnenos.

In the evening His Beatitude attended a cultural event of a traditional concert under the pianist Mr. Alexei Lioubimov.

On Friday 25th November/8th December 2017, accompanied by the Most Reverend Metropolitan Cyril of Ekaterinburg, His Beatitude the Patriarch of Jerusalem Theophilos visited the underground place of the execution of the Tsar of Russia Nikolai and his family. A magnificent Church has been built at this place, dedicated to the Russian Orthodox new martyrs of the years of the communist regime. Therein the Patriarchal entourage chanted the apolytikion of the martyrs.

Afterward His Beatitude visited the historic small Church of St. John the Baptist. During the October Government this was the only open Church for the services of feasts, weddings, funerals and other sacraments for the religious needs of the citizens who number half a million.

Later on, at the invitation of the Metropolitan, His Beatitude spoke on the Gathering of the Metropolis which was attended by Priests, teachers, monks, nuns and catechumens. His Beatitude conveyed the blessing of our Lord Jesus Christ who became incarnate in the Cave of Bethlehem and was resurrected from the dead at the All-holy Tomb. He especially underlined the continuous mission of the Church throughout the centuries: “I am the light of the world, you are the salt of the earth”. He also underlined the significance of the centenary anniversary festivities for the Russian Church and all Churches, due to the persecutions and sorrows; the Russian Church was victorious over these, having as the first martyr the Patriarch of Moscow Tikhon the Confessor. He stressed that the rebirth of Russia and its Church is owed to two leading figures, President Putin and Patriarch Cyril, with the mutual cooperation of Church and government. President Putin is in favour of the Evangelic principles and morals against the liberate principles and morals projected by Globalization, which circumvent the institutions of family, national identity and biological entity of the people. The Priests as the Cyrenes of the Bishops should focus their attention to the young people.

On the occasion of this Gathering, Metropolitan Cyril offered the medal of St. Seraphim of Sarov to distinguished Priests for their pastoral and ministerial work.

Finally, His Beatitude visited the historic Holy Monastery of St. Alexander Nevsky, which numbers 150 nuns. In this Monastery, the Church of Theotokos Novotichnaskoria is very large and most beauteous, with byzantine structure and murals. The Church has no electricity but its lighting is provided by oil canticles. It is a place that one can admire the beauty of the Church as a reflection of the heavenly beauty.

The choir of the nuns of the Monastery chanted in Byzantine music and in the Greek language. The nuns keep iconography and translation workshops where they translate books from Greek into Russian. They welcomed His Beatitude and His Entourage in a touching reception, singing hymns of the Theotokos by St. Nectarios and the Polychronion.

His Beatitude spoke with reference to the present owner of the Church Mr. Igor Altouskin and his past donations for the Patriarchal Hall and the Exarchy of the Holy Sepulchre in Cyprus.

His Beatitude offered the nuns an ivory cross while they offered Him in return an embroidered cloth for the holy vessels and a complete embroidered Patriarchal set of vestments.

The welcoming reception at the Church was followed by a lunch meal offered by the Monastery.