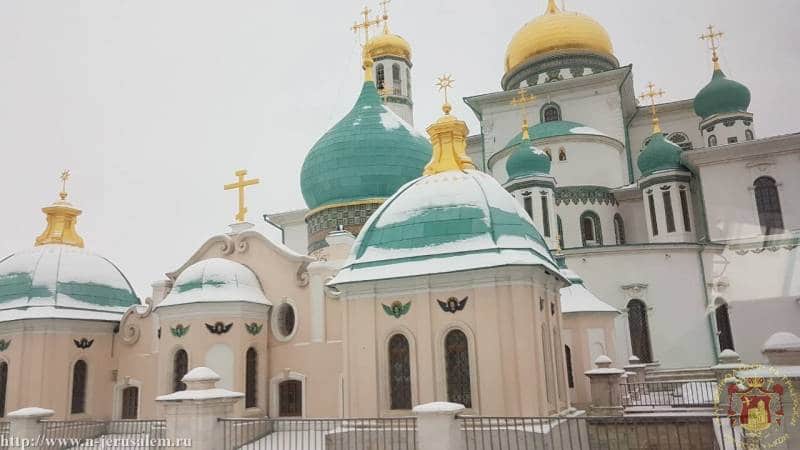 From Thursday 17th/30th November to Monday 21st November/4th December 2017, His Beatitude our Father and Patriarch of Jerusalem Theophilos participates as a guest a the festivities of the Russian Church on the occasion of the completion of 100 years since the October Revolution and the consequent persecutions against the Russian Orthodox Church, as well as the convocation of the Holy Clergy-laity Local Synod of the Orthodox Church of Russia.

His Beatitude’s escorts in this mission are Geronda Secretary General Most Reverend Archbishop Aristarchos of Constantina, the Most Reverend Archbishop Theophylactos of Jordan, Archdeacon Mark, and the Patriarchate’s representative in Moscow Archimandrite Stephen. His Beatitude arrived in Moscow from Tel-Aviv by Aeroflot airlines on Thursday evening 17th/30th November.

Upon arrival at the airport His Beatitude was welcomed by the Most Reverend Metropolitan Podolsk, the representative of the Moscow Patriarchate in Austria and Hungary Mr. Tychon, Archimadrite Theophanes of the Russian Church and Archimandrite Stephen the representative of our Patriarchate in Moscow, while at the reception hall He was also welcomed by the Most Reverend Metropolitan Theodosios of Tablof.

His Eminence Theodosios welcomed His Beatitude, thanking Him for accepting the invitation in order to participate in the anniversary of the tragic events witnessed by the Russian Church during the communist revolution, from which hieromartyrs and new martyrs were highlighted in the Russian Orthodox Church.

In reply, His Beatitude expressed His joy for His participation in this anniversary of the Russian Church and thanked the Trinitarian God and the Patriarch of Moscow Cyril for the invitation for His participation, which denotes the good relationship and cooperation between the Jerusalem Patriarchate and the Moscow Patriarchate.
Moreover, His Beatitude said that the martyrdom which watered the tree of the Russian Church is an integral part of its mission. The Church of Russia rejoices over the fruits of this martyrdom today. We also, His Beatitude added, have a similar experience in the Holy Shrines. A testimony of this is yesterday’s commemoration of the memory of the New Martyr St. Philoumenos the Hagiotaphite.

SECOND DAY OF HIS BEATITUDE’S VISIT IN MOSCOW

On Friday morning, 18th November/1st December 2017, His Beatitude our Father and Patriarch of Jerusalem Theophilos visited the Monastery “New Jerusalem”, which was founded by the memorable Patriarch of Russia Nikon, in the 17th century.

After the communist regime and the reorganization of the Russian Church, the monastery has been renovated and the vision of Patriarch Nikon is realized, namely, there is an exact and detailed representation of the  All-holy Church of the Resurrection and the shrines within it, the Sacred Edicule, the Holy Tomb, the Horrendous Golgotha, the finding of the Sacred Cross, the Deposition, the Praetorion, Christ’s Prison, Via Dolorosa and other places of the Lord’s Passion.

In this Monastery, the Hegoumen Archimandrite Theophylactos, who also had his birthday on that day, and has contributed a lot for the keeping of the Monastery, welcomed His Beatitude and offered Him an Episcopal Staff, which His Beatitude returned as His own offer, so that the Staff remains in the Monastery awaiting for His return to celebrate the Divine Liturgy and use it then. His Beatitude offered the Monastery an ivory Cross for blessing.

The guided tour was followed by lunch, which was offered by the Hegoumen Archimandrite Theophylactos.

On the afternoon of the same day there was a visit at the Holy Church of St. Savvas Storozevsky, who was a disciple of St. Sergei of Radonesk and lived an ascetic life in the 15th century.

Therein, His Beatitude was warmly received by the Hegoumen of the Monastery Hieromonk Savvas, who has refurbished the Church of the Nativity of the Theotokos and the Holy Trinity from the damage it suffered during the communist regime.

Archimandrite Savvas offered His Beatitude an icon. His Beatitude offered him in return an ivory cross for blessing, saying that the name of the founder of the Lavra in the Holy Land, namely our Father among the Saints Savvas the Sanctified and his manner of living were spread throughout Orthodoxy, as that of St. Savvas the Serbian in Serbia, and in other places, where the monks have had as prototypes in their lives the Ever-Virgin Theotokos and St. John the Baptist and they owe to pray always for the faithful and strive to set an example of the ascetic Christian life.

With this visit the second day of His Beatitude’s visit in Moscow came to an end.