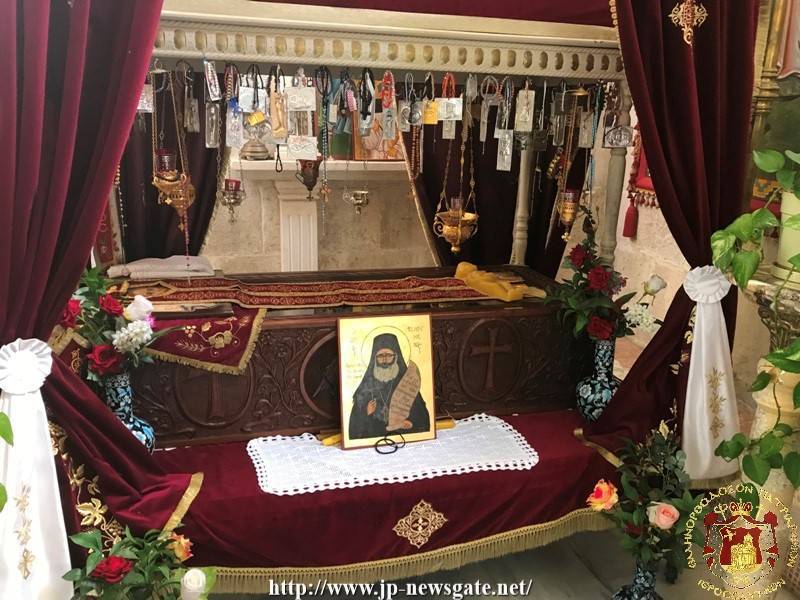 THE FEAST OF THE NEW MARTYR ST. PHILOUMENOS THE HAGIOTAPHITE

On Wednesday 16th/29th November 2017 the feast of the New Martyr St. Philoumenos was celebrated at Jacob’s Well in Nablus of Samaria.

As known, the canonized by the Church of Jerusalem Saint in 2009, had joined the Hagiotaphite Brotherhood since his early childhood, and was ministering as the Hegoumen of Jacob’s well when he suffered a martyr’s death by the hands of an irreverent man in 1979.

On the feast of this new martyr at the marvellous Church that has been built by Archimandrite Ioustinos above the well, the Divine Liturgy was led by H.H.B.  our Father and Patriarch of Jerusalem Theophilos, with co-celebrants the Most Reverend Archbishops Aristarchos of Constantina and Philoumenos of Pella, Metropolitan Joachim of Helenoupolis, the Hagiotaphite Hieromonks; the Hegoumen of the Monastery of the Shepherds Archimandrite Ingatios, Arab-speaking Priests, Archdeacon Mark and Deacon Anastasios. The choir leader of the All-holy Church of the Resurrection Archimandrite Aristovoulos sand in Greek, Russian and Romanian on the right, and Archimandrite Leontios in Arabic on the left, at the presence of the Consul General of Greece in Jerusalem Mr. Christos Sophianopoulos and a vast crowd of faithful, Arab-speaking locals and pilgrims from Greece, Cyprus, Russia and Romania who honour the Saint.

His Beatitude preached the divine word to this congregation as follows:
“For God hath not given us the spirit of fear; but of power, and of love, and of a sound mind.  Be not thou therefore ashamed of the testimony of our Lord” (2 Tim.1:7-8), St. Paul advises his disciple Timothy.

The sacred memory of the new hieromartyr Philoumenos the Hagiotaphite has gathered us in this holy hagiographic place of Patriarch Jacob’s well and the hometown of St. Photeini, the Samaritan woman, where the saint suffered his martyr’s death, in order to honour him and glorify in Eucharist our Lord and God Jesus Christ, who suffered death on the cross for us and our sins.

The unselfish love for our Saviour Christ has highlighted the indeed great and dense cloud of people who martyred for the truth of Christ’s faith. And the blood of these martyrs is what has watered the tree of life, namely the mystical body of Christ and the Church.

The holy martyrs, Stephen the first martyr, James the Brother of God, and James the son of Zebedee, became the primary founding apostolic stones of the foundation of the Church of Jerusalem through their sacred martyr’s blood.

In other words, they became co-martyrs of the sacred blood of Christ on the cross, who was indeed the cornerstone of the foundation of the Church (Eph. 2:20). Those who became the house of the Spirit of God are all the saints, and the Palestinian martyrs and friends of Christ among whom is today’s honoured Saint Hieromartyr Philoumenos.

The Church of Jerusalem boasts in “the glory of Christ” (Eph. 15:17), because according to St. John the Theologian, the martyrs of the Lord are those who “have washed their robes, and made them white in the blood of the Lamb. Therefore are they before the throne of God, and serve him day and night in his temple: and he that sitteth on the throne shall dwell among them” (Rev. 7:14-15).

And again the Church of Jerusalem boasts in “the glory of Christ” (Eph. 15:17), because it is the “womb” of the martyrdom of the redeeming blood of the Son of God and our Saviour Jesus Christ.

In other words, Christ delivered us from the bondage of sin, offering His precious blood as a lamb’s sacrifice, being totally immaculate and clean as St. Paul preaches by saying “ Forasmuch as ye know that ye were not redeemed with corruptible things, as silver and gold, from your vain conversation received by tradition from your fathers; But with the precious blood of Christ, as of a lamb without blemish and without spot: Who verily was foreordained before the foundation of the world, but was manifest in these last times for you” (1 Peter 1:18-20).

Such a soldier of Christ and communicant of His life-giving death was our Father Hieromartyr Philoumenos, who loved Christ from his early childhood and placed himself in the ministry of His vineyard, namely the Church, and the Church of Jerusalem, by his joining the Order of the Hagiotaphite Brotherhood.

During his ministry as the Hegoumen of this holy shrine and as the shepherd of the congregation of the Nablus district and Samaria, not only did he drink from the spiritual water that the Samaritan woman drunk, but also he followed her footsteps, preaching and teaching that Christ is the Messiah the Son of God, the light and the life and the redeemer of the world.

St. Philoumenos’ preaching that Christ is the completion of the Mosaic Law and the prophets and “in him dwelleth all the fullness of the Godhead bodily” (Col. 2:9) caused the wrath and rage of his murderers. Those who hated him, the friend and Priest of Christ, hieromartyr Philoumenos, thought that by slaughtering him at the time of prayer they offer worship to God, according to the testimony of St. John the Evangelist: “These things have I spoken unto you, that ye should not be offended. They shall put you out of the synagogues: yea, the time cometh, that whosoever killeth you will think that he doeth God service” (John 16:1-2).

The killers of the martyrs of Christ, among the latter our saint Philoumenos, did not realise that the holy martyrs are standing by the throne of God and worship Him eternally in boldness, as St. Methodios of Olymbos says “the martyrs are chanting; and there are two choirs of the martyrs, the one of the New Testament, and the other of the Old Testament”.

Our Father Philoumenos who has been deemed worthy of the truth of Christ’s gospel as a martyr, is rejoicing along with all the holy martyrs in heaven and unceasingly prays to God for all those who honour his memory. Therefore my dear brothers, let us say along with the hymn writer: “No tribulation, threat or hunger, persecution, fire, sword or savage beast could separate the holy martyrs from God! They were bound by His love and lived as exiles in this world! Their suffering has won them a glorious prize: They inherited the heavenly Kingdom//where they ceaselessly pray for our souls” and for the peace in our region. Amen. Many happy returns!”

After the Divine Liturgy, the Hegoumen and owner of the Holy Church Archimandrite Ioustinos offered a reception and a meal.

During lunch the Lawyer Mr. Halil Ganam, of Roman-Orthodox descend, addressed His Beatitude in Arabic as per the link below: